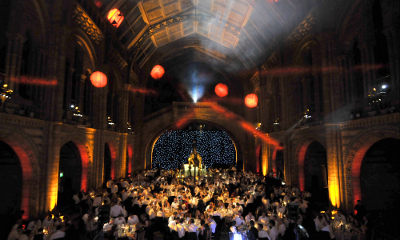 Over 400 industry professionals joined CEDIA (the Custom Electronic Design & Installation Association) on Friday night at the Natural History Museum as the winners of the 10th annual CEDIA Awards were announced.

The CEDIA Awards were created to celebrate design, installation and integration excellence in the home technology sector and can always be relied upon to choose interesting and impressive surroundings to provide a back-drop to the evening.

This year, the awards attracted over 120 entries from 17 different countries, all competing for the best media room, home cinema, integrated home, super yacht and other category prizes.

Check out who won by clicking on our special awards slide show to the right.

Attendees to this year’s Awards were treated to a memorable night of dining, networking and comedy in the impressive surroundings of London’s Natural History Museum, featuring the iconic and soon to be retired 26m Diplodocus skeleton, affectionately known as Dippy.

Comedian and writer, Danny Wallace, known for his production work on UK comedy shows such as Dead Ringers and The Mighty Boosh and his many books including Yes Man, which was made into a Hollywood film starring Jim Carey, hosted the evening with great aplomb.

No stranger to the AV world, Danny is a former presenter of the Home Cinema Choice Awards.

Also helping present the awards were Kris Hogg, CEDIA chair of the volunteer board of directors and Wendy Griffiths, executive director of CEDIA region 1.

The successful winners and highly commended projects have all been captured in the CEDIA Awards 2015 yearbook.

The yearbook celebrates the hard work and creativity put into every project with images, project synopsis and kit lists included.

The Awards yearbook is available to download from www.cediaawards.org with printed copies also available.

After the ceremony, attendees were invited to continue celebrating the night’s events at the lively after party, hosted by Artcoustic, at the Natural History Museum.