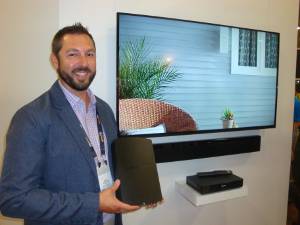 Clearly, Bose is getting really serious about the custom installation channel.

At the 2015 CEDIA Expo, the mega-brand company had its largest presence ever with a large booth where it debuted five new SoundTouch products and new ‘Virtually Invisible’ bezel-less speakers targeted at the channel.

Long gone are the faded memories of the Electronic Lifestyles lawsuits between CEDIA and Bose.

“We are making a dedicated effort to this channel with the most comprehensive wireless audio solutions in the industry,” says Adrian Eiben, business unit manager at Bose.

He was referring to the introduction of both Bluetooth and Wi-Fi wireless to the SoundTouch series of products.

“This is a gamechanger. Now you can play everywhere and it does not tax the home’s Wi-Fi bandwidth.”

At the show, the Framingham, Mass.-based company showed off its next-generation SoundTouch wireless music systems with both Bluetooth and Wi-Fi built in.

Also, most significantly, the series has an open API and Bose has already partnered with RTI, Elan, Control4, Staples, URC, AMX, Crestron, Key Digital and others.

“We are listening to the channel. We value this channel. It is all about ease of use,” adds Adrian.

The Bluetooth capability allows for streaming of any song, playlist, music service and YouTube directly from a phone or tablet.

With Wi-Fi, users can broadcast it to as many SoundTouch speakers they have, or use the SoundTouch App to explore integrated music services, set personalised presets and enjoy different music in different rooms.

Bose also announced at the show that coming early next year it will be offering Spotify Connect integrated into the SoundTouch App and ReadySet with Spotify that allows for preloading of playlists.

The line-up now includes the:

SoundTouch SA-5 amplifier, which powers weatherproof speakers for patios, balconies and backyards. The £429 retail amp boosts both Wi-Fi and Bluetooth to 100W per channel for two speakers.  It has three auxiliary inputs for CD, Xbox, cable box, etc.

“SoundTouch has always been about the experience – what listening to streaming music at home should be like,” says John Roselli, general manager of Bose Wireless Speakers.

“We engineered everything around that simple idea. So, SoundTouch systems are easier to use than anything else available, they sound incredible and now they let you listen to anything from your phone or tablet in as many rooms as you want.

“There’s nothing else like it, and the SoundTouch 10 is a great way to get started.”

Each SoundTouch comes with six universal presets both in hard buttons on top of the speakers as well as in the App for programming Spotify, iTunes, iHeartRadio, Deezer, etc. This functionality means the homeowner does not have to necessarily use the App all the time.

Hand in hand with the SoundTouch series, Bose showed off its new Virtually Invisible bezel-less design in-wall/in-ceiling speakers ranging from £419 for the 591/691 and £549 for the 791/891.