McIntosh is getting ahead of CES, with the audio equipment manufacturer announcing the D1100 Digital Preamplifier and MP1100 Phono Preamplifier ahead of its Vegas debut.

Ahead of their debut at CES 2017, the two new preamplifiers are designed to integrate turntables and digital devices into home audio systems. The D1100 Digital Preamplifier supposedly includes the company’s most advanced DAC to date, featuring nine digital inputs, while the MP1100 Phono Preamplifier features 24-bit digital outputs to enable recording from vinyl sources.

An eight-channel, 32-bit DAC is used in Quad Balanced mode and digital inputs include three optical, three coaxial, plus MCT, AES/EBU and USB inputs, the latter accepting up to 32-bit/384kHz signals and supporting DSD64, DSD128, DSD256, DXD 352.8kHz and DXD 384kHz playback; all other inputs accept up to 24-bit/192kHz. Three pairs of balanced and unbalanced stereo outputs are also offered.

Designed for ease of use, the D1100s inputs can be renamed, its four data ports and four power control triggers are fully programmable, plus it has both IR and RS232 external control.

The D1100 is a fully featured, fully functional self-contained unit that can be used independently of any other preamplifier. It can also be connected to and used in tandem with its analogue equivalent, the C1100 Vacuum Tube Preamplifier. When connected, the C1100 takes over all control of the D1100.

The MP1100 has three sets of RCA phono inputs, with one set of XLR connectors. All phono inputs allow for adjustment of both resistance (six settings) and capacitance (eight settings). The preamp comes pre-programmed with profiles for Moving Coil and Moving Magnet cartridges as well as McIntosh’s MT10 and MT5 turntables.

Five additional fully customisable profiles are included and these can be assigned to any phono input. RIAA, LP, NAB, AES and 78 analogue equalisation curves are also available, plus two built-in analogue filters: a Rumble Filter and a Scratch Filter. Adjustable gain from 40dB to 64dB allows for further customisation, while a mono setting enables proper playback of mono recordings. In addition, there’s a pair of balanced and unbalanced high-level inputs for connecting other sources, and a pair of balanced and unbalanced fixed outputs complete the connections. 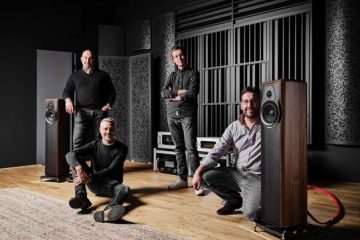