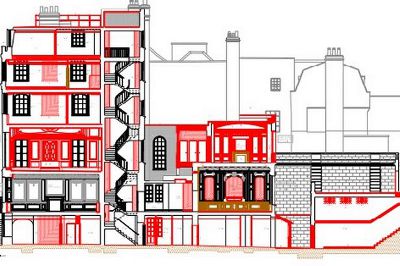 If you’re a Russian oligarch or Saudi Arabian prince, then this house may be of interest.

Plans submitted to Westminster Council detail a new mansion to be built at Eight Grosvenor Square and whilst new houses are popping up in London all the time, this will be one of the city’s longest – measuring 190ft.

So what will £70m buy the prospective owner? Well the 18,000sq/foot property is roughly the size of half a football pitch and includes leisure facilities, sleeping quarters and entertaining rooms.

The 18th Century building on the corner of Grosvenor Square will also encompass the mews home on Duke’s Yard.

Originally built in the 1720s and used by the US army during the Second World War, Eight Grosvenor Square will be kitted out with six main bedrooms, staff quarters and a garage large enough to hold six cars.

Underground will be leisure facilities that will consist of a gym, underground swimming pool, Jacuzzi and a state of the art home cinema.

The lower ground floor will be utilised predominantly for the staff, complete with butler’s quarters, a room for security, laundry room, pantry and a kitchen.

The owner of the property is expected to live on the second floor which will be arranged as a self-contained apartment complete with a large lounge and two enormous bedrooms complete with en-suite.

The dining room in this 18th Century mansion will measure 800sq/ft, which is around the same size as a typical new built house in the UK.

The Estate Agents tasked with selling the house believe that there will be no shortage in interest in the property, with wealthy Middle Eastern, Indian and African buyers likely candidates.

Westminster Council has yet to approve the plans, although the developers are confident; with the local authority having previous approved proposals for the property.