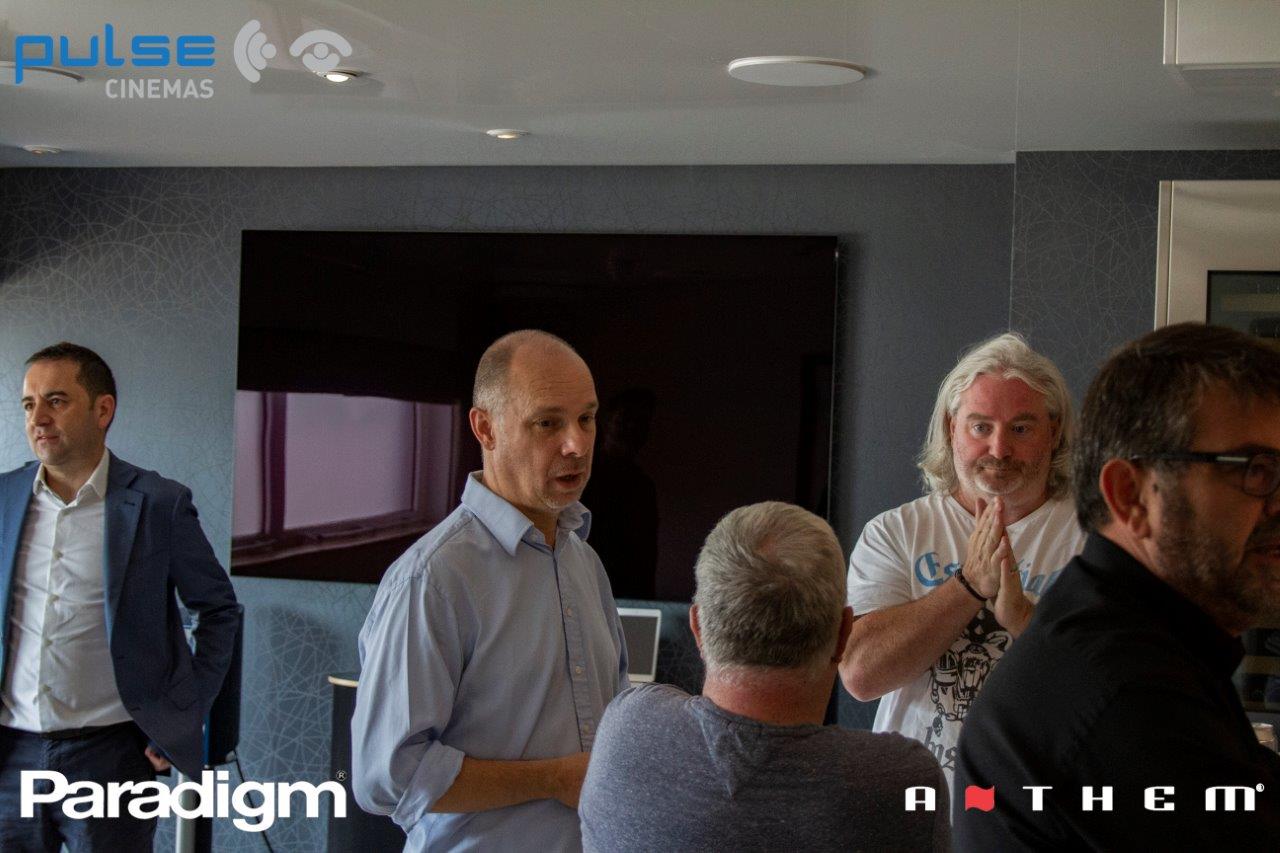 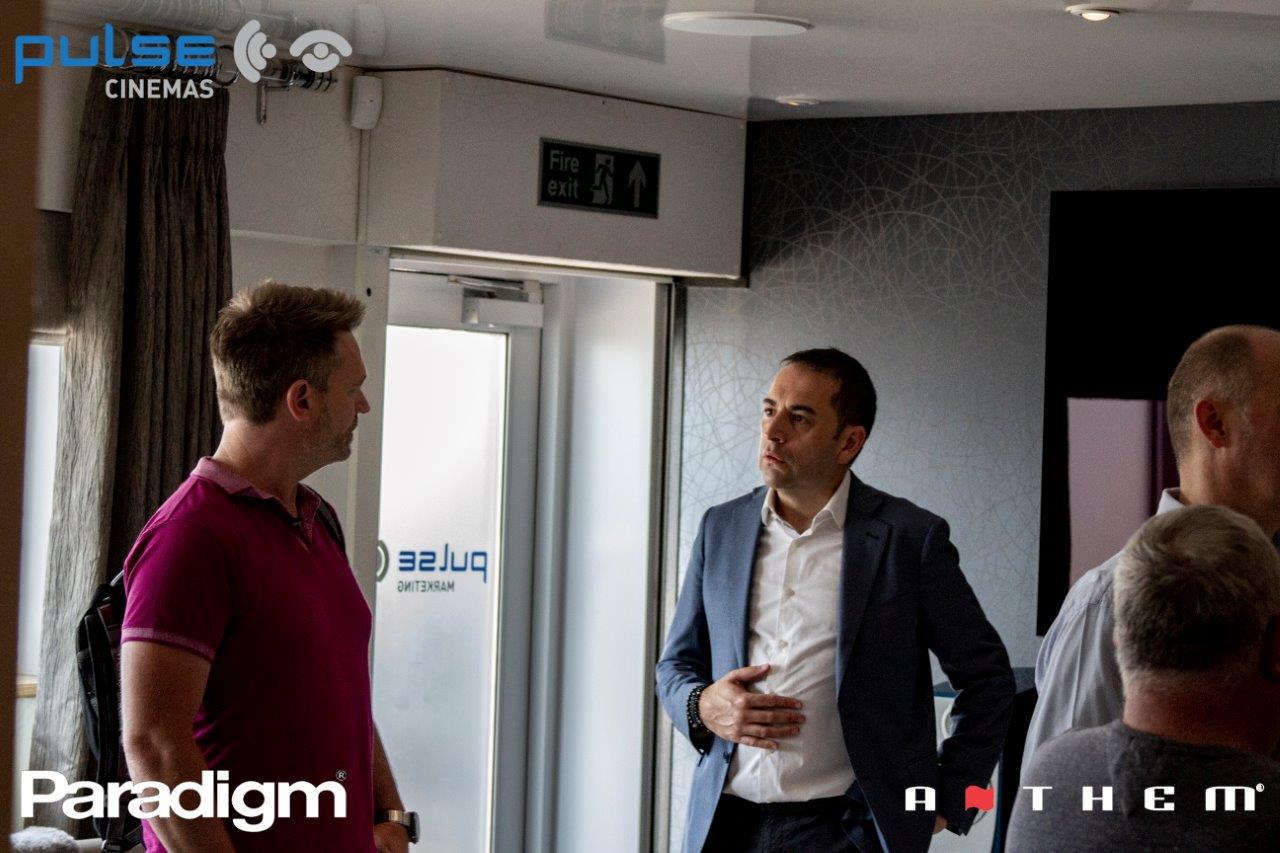 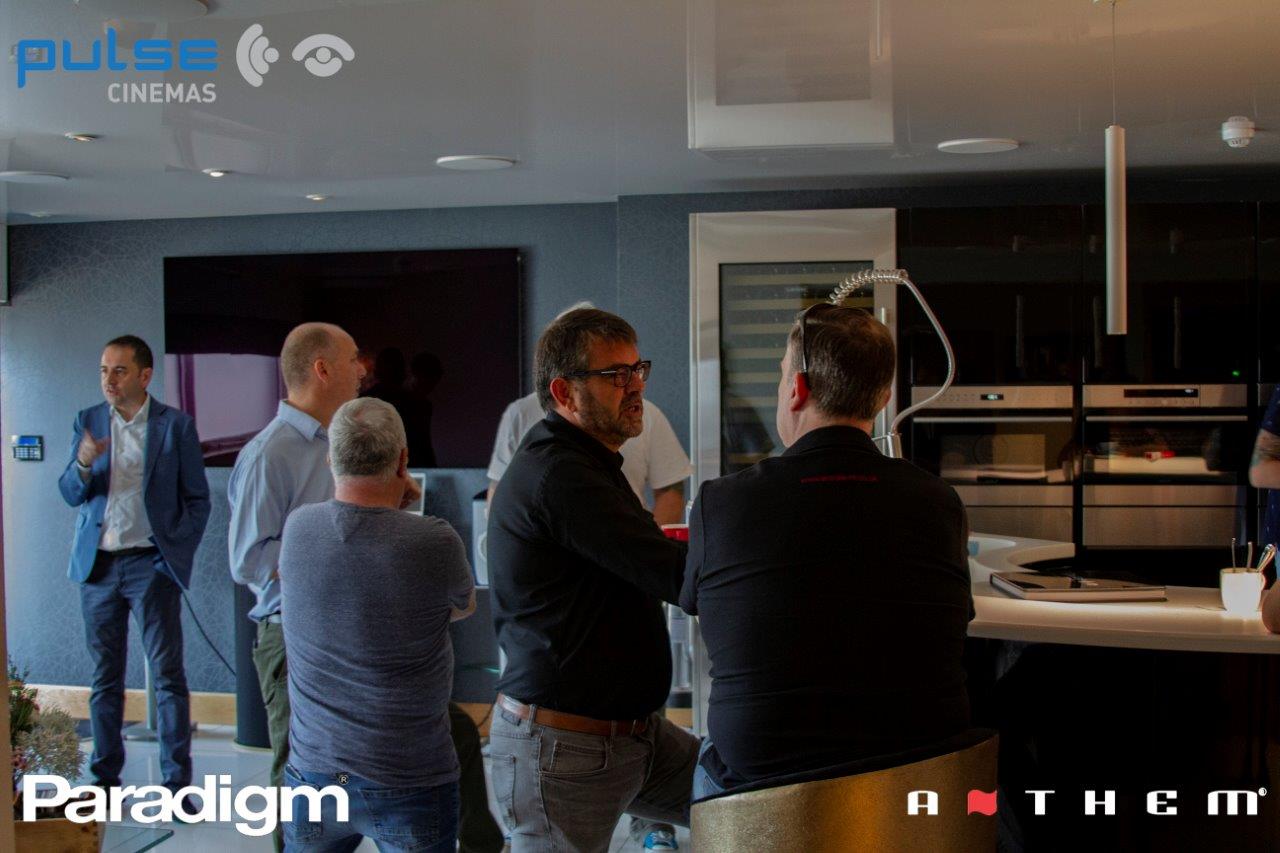 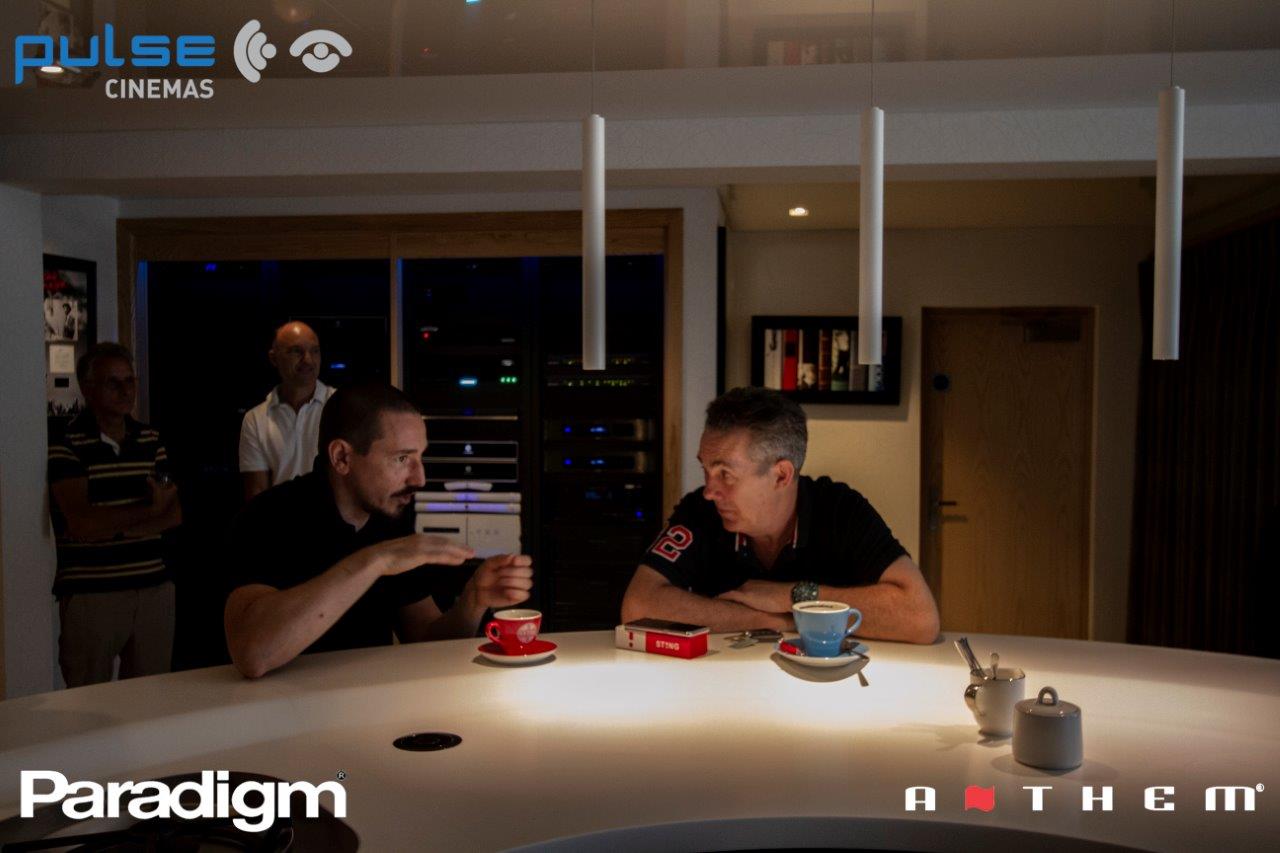 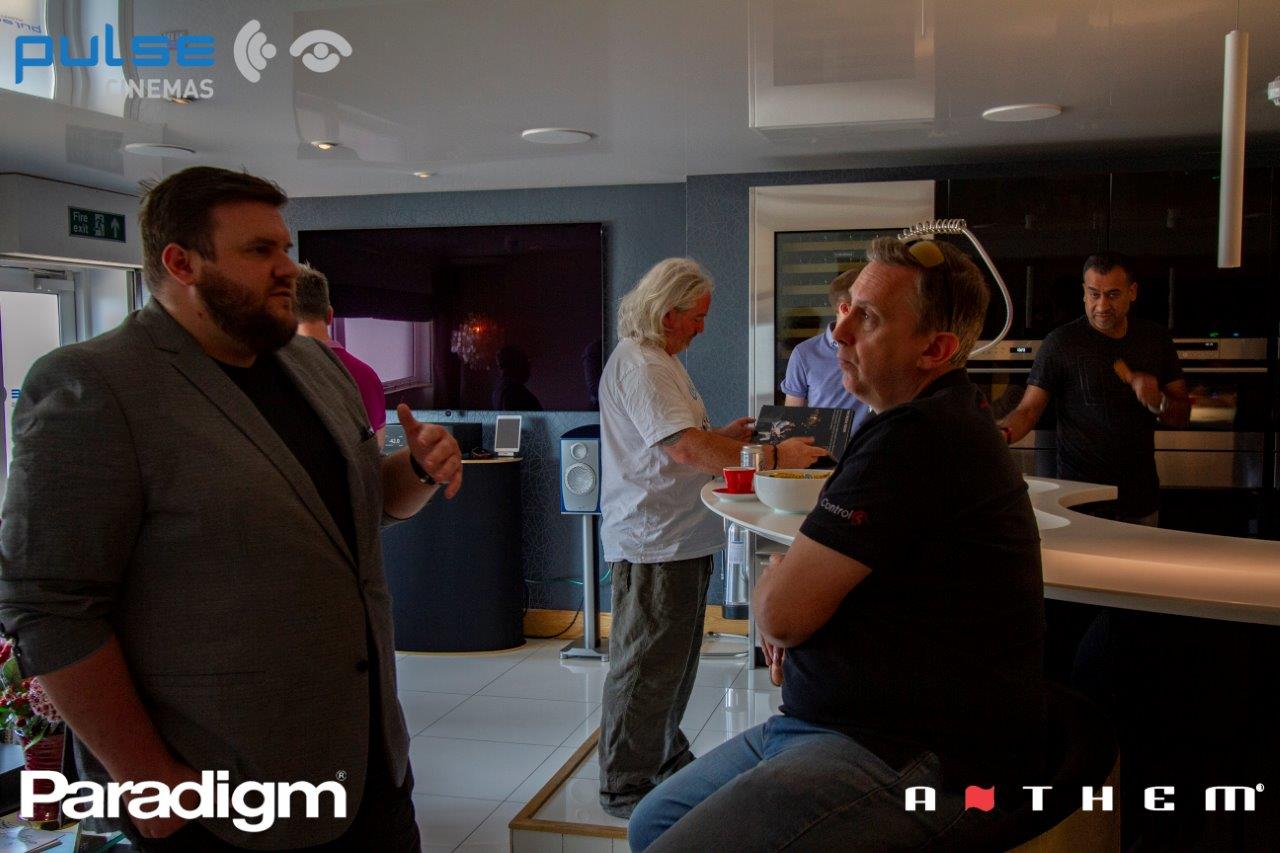 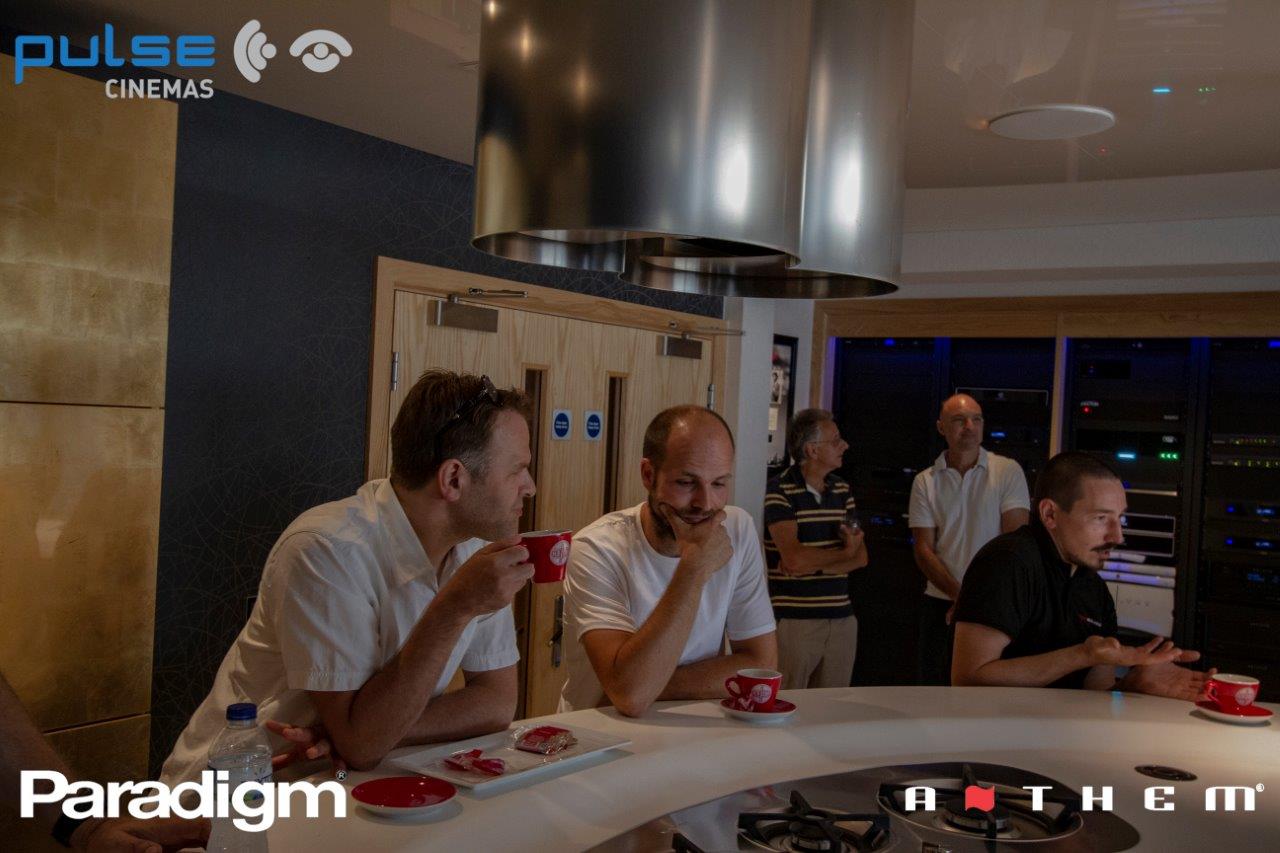 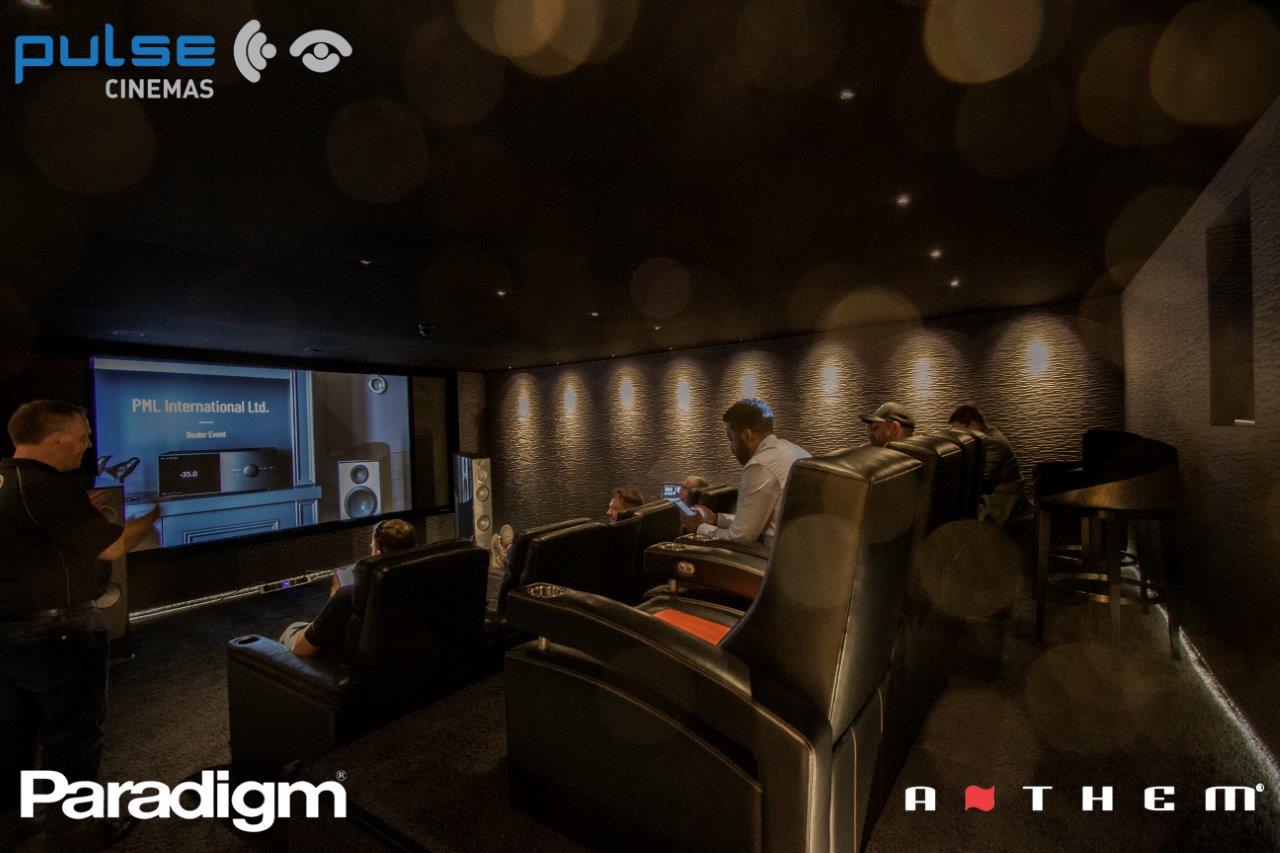 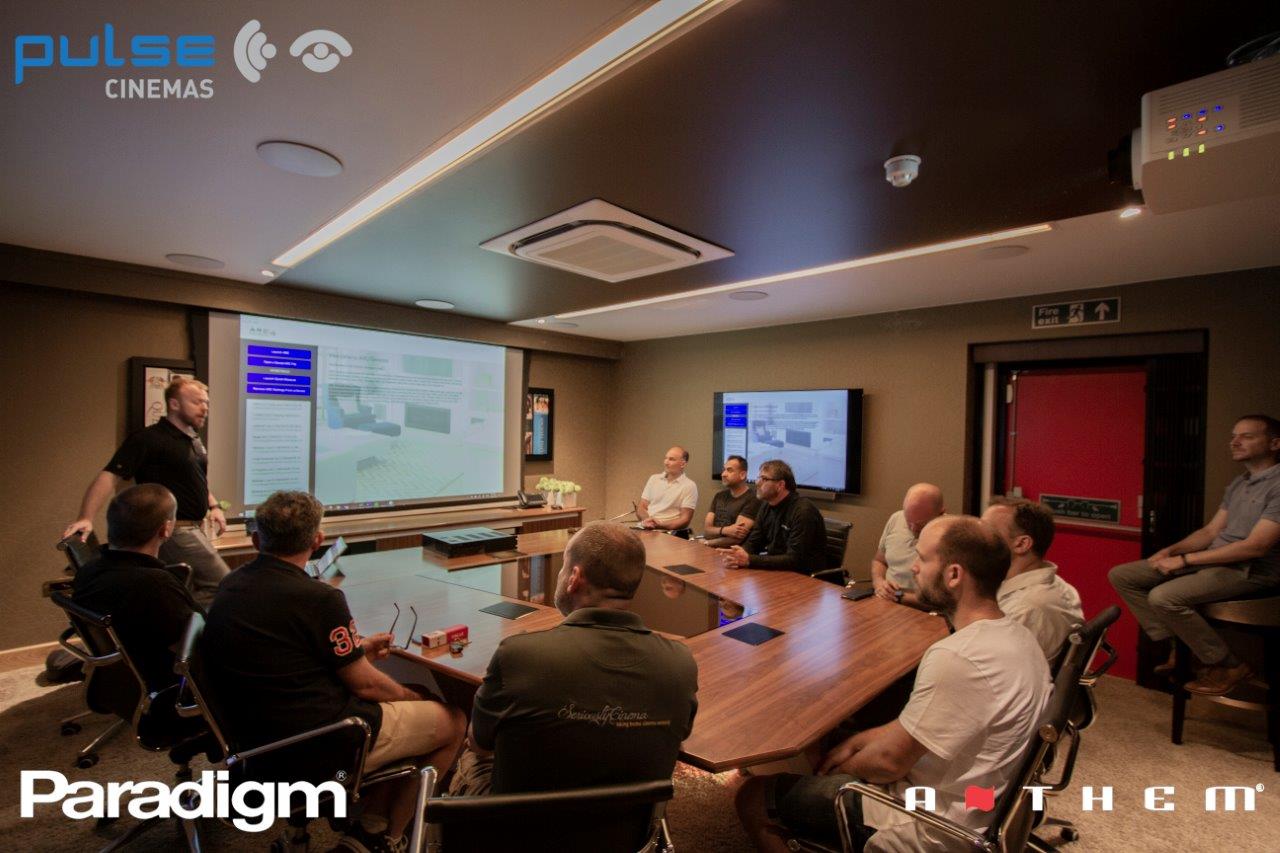 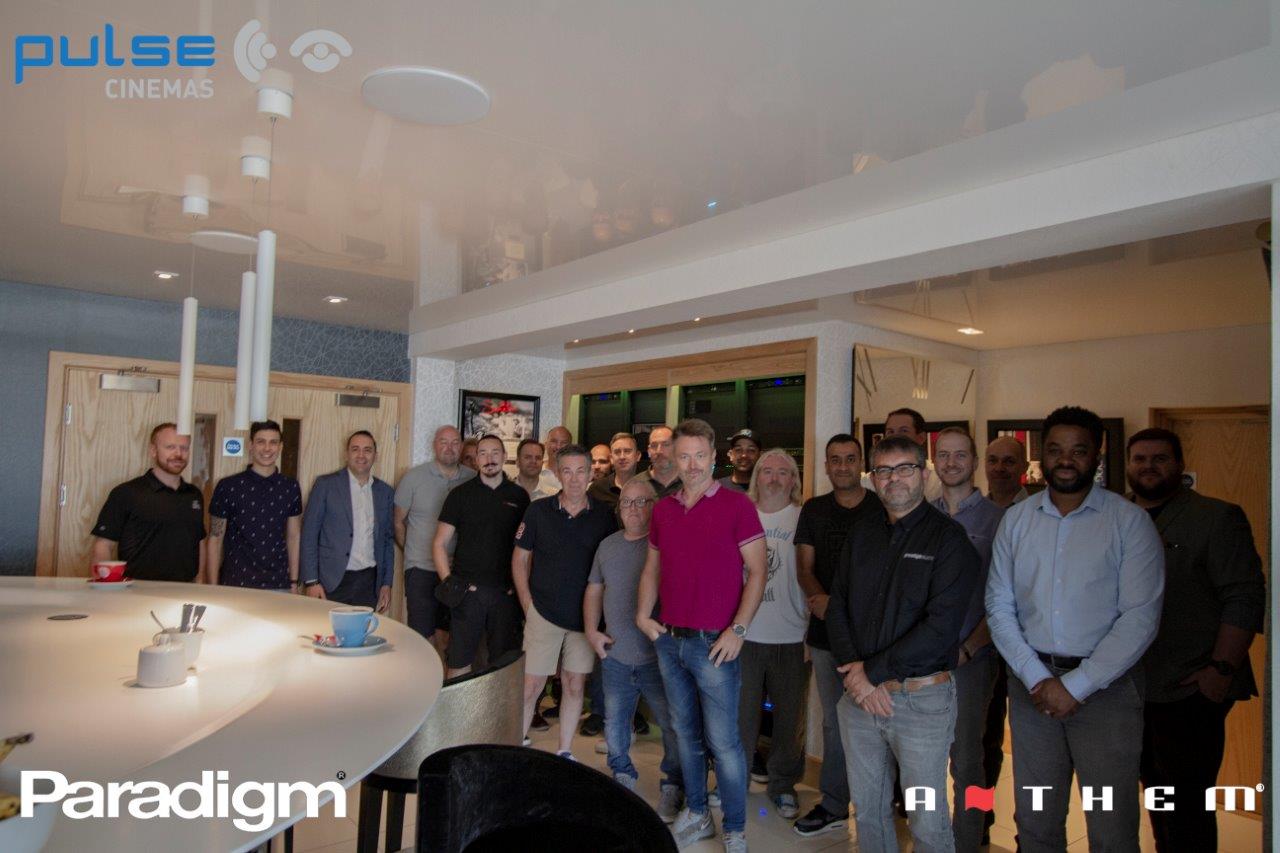 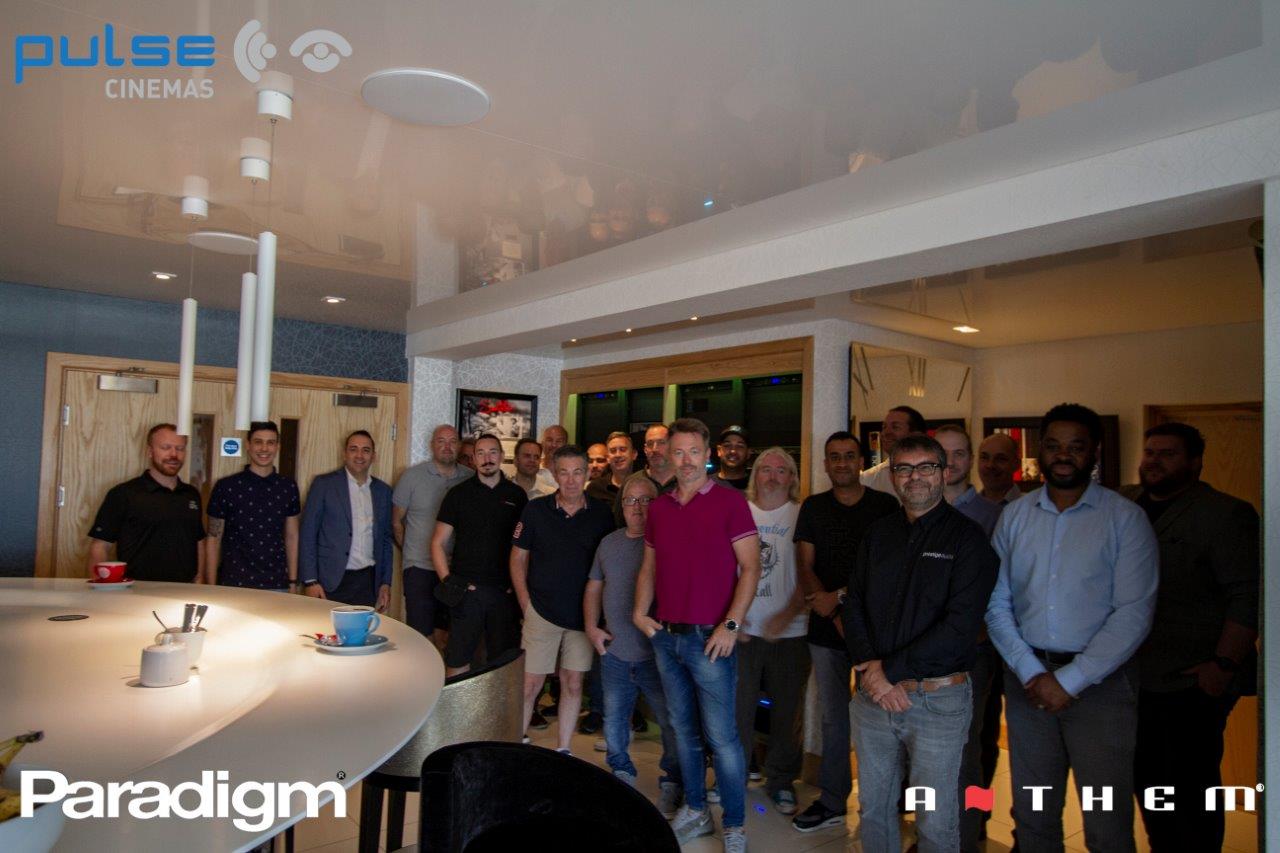 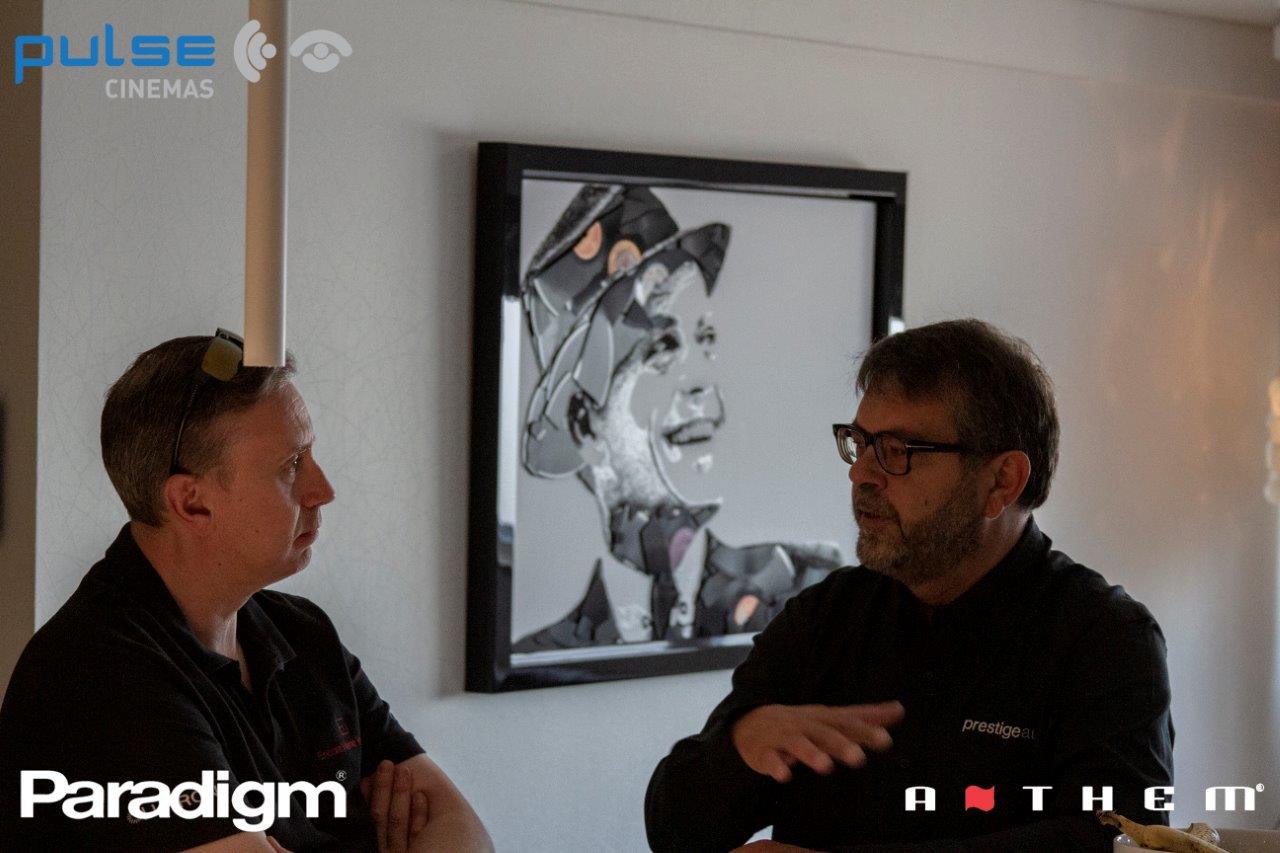 The team from Paradigm/Anthem, including new Managing Director John Bagby, flew into Pulse HQ to spend two days explaining the benefits of this recently upgraded room correction software as well as some brand-new products from the Anthem range.

During two separate events, one for UK press and one for installers, the team gave a comprehensive overview of the advantages of working with this group which combines high-quality hardware and software all in one package.

On the dealer day, EI was in attendance to see John and the team give a full overview of Paradigm, Anthem and the most recent enhancements on the ARC Genesis room correction technology.

The latest version of ARC Genesis – now available on Mac and Windows operating systems – can also be used on Android and Apple smart devices and boasts a more user-friendly UI. Other new features include the capability to phase-align speakers and subwoofers.

Using its considerable resources, including one of the largest anechoic chambers in the world, this family of brands creates reference performance curves for its speakers, which ARC Genesis can then apply out in the real world; compensating for the varied environments the speakers find themselves in.

ARC Genesis digitally compares a room’s acoustic signature to that of the lab standard. It measures the response of each speaker relative to the listening area. It then uses its algorithms to eliminate the negative effects of the obstacles in the room. When ARC removes the obstacles, what’s left is the lab standard performance of the speakers.

Some other highlights for this version of ARC Genesis include fast turn-around from command to action in each zone and maximum volume setting for each zone.

In general, the user will notice better clarity in the vocals and more control of the bass frequencies as particular improvements post ARC Genesis being run. More clarity also often equals less volume, so systems are easy to run and need less grunt to get what the listener really wants.

The day was also a chance to find out about some new products from the Anthem family in the form of the MDX Series rack mounted multi-zones amplifiers, offered in eight and 16-channel configurations (MDX-8, MDX-16).

As well as all the usual quality associated with the brand, installers get the ARC Genesis platform built-in for each zone the amps are powering.

A feature which went down particularly well as it allows installers to not only deal with the usual ‘main zones’ but also create better performance in challenging areas, such as the kitchen or bathroom.

There is also bass management for each zone and drivers for all the most popular home automation systems are available on the MDX series, with the last to be added being RTI which is in the pipeline. Some of the new products are already installed at Pulse HQ and can be experienced there.

Mike Ranpura, Director at Smart Life AV, said, “It was refreshing to see the Managing Director of such a large company fly out to train UK dealers, something that is usually unheard of in this day and age. It was even more impressive to find out that he had significant involvement in the development of ARC Genesis.

“I have not personally used ARC before, but having attended the training and recently visiting the Paradigm Anthem HQ in Toronto to see how the products are made, I have gained enormous confidence in the brand.

“ARC is a notable feature that has been helping integrators upsell AV receivers from retail brands and the fact that the new MDX series of Multi-Room amplifiers includes this ability, helps Anthem create a unique proposition in the market. Every audio zone can now benefit from room correction technology helping your speakers sing to their maximum potential.”

EI also took the chance to interview some of the other key people taking part in the event, so check out the results in our video interviews below.

It’s worth taking a little time to look at some of the history of the Paradigm and Anthem group in order to underline where the drive for high-quality performance comes from.

In terms of the Paradigm brand, a huge amount of research has been conducted by the company in order to work out what ‘good audio’ sounds like. It’s all very well audio inventors making speakers that they like and think sound great, but what about humans in general? Is there a type of sound that most humans react well to? These types of questions are ones the company has tried to solve since the 1980s.

This desire to find ‘good audio’ quickly led to a partnership with researchers at The National Research Council (NRC) of Canada, who helped conduct extensive testing in order to give the company a thorough scientific understanding of audiology.

The research revealed measurable traits common to the most realistic sound reproduction. It established scientific parameters that are critical to achieving good sound, and recognised performance curves that were appealing to as much as 90% of the population. The whole group applies those principles to this day with the most recent expressions including ARC Genesis and the MDX Series.

The company’s factory in Canada is also an expression of these aims, controlling as much as of the production as possible, using raw materials and genuinely building much of the equipment from scratch.

Another trait John Bagby was keen to underline at the event was the company’s desire to match performance with price point. The company argues it has the knowledge not just to make good products, but to bring them in at price points that make them attractive and achievable to a wider set of customers than some other brands.

Most of this performance and know-how was concentrated in the Canadian and North American markets until around 2014/15, when the brands really began to motor in the rest of the world. It’s actually a pretty sobering thought that the group has only been available in the UK for a relatively short space of time and so its achievements to date are impressive.

Aware of the challenging market that installers face, the company has also worked hard to even out its global pricing – so installers are not faced with customers in the ‘Google age’ complaining that the products are ‘cheaper’ elsewhere.

It was also refreshing and interesting to hear John talk about the role of private equity in the market. The Anthem/Paradigm and Martin Logan group had a period being owned by private equity firm, Shoreview Industries, which purchased a controlling interest in the brands in 2005.

However, in May 2019, original Founder, Scott Bagby along with John announced the purchase of all three brands in the group as Shoreview Industries left the business. This marks a new era for the business and a positive development as the new owners clearly feel that to be really successful, it can’t just be about the money; those owning and driving the brand forward need to really care about what the company is doing to deliver the products the market needs.

Expect more of the same from this ambitious group of brands and look out for a full interview with John Bagby in the coming months.