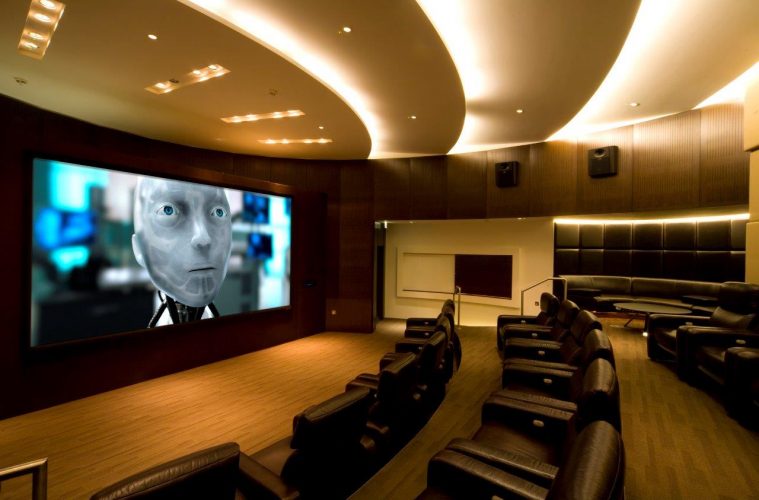 Get set for cinemas!

Custom Sight and Sound Damien’s association with the world of AV and install began at a young age, as he worked whilst studying at his local Bang & Olufsen in Tenterden in Kent.

Run by an old family friend, Lance Hopley, Damien carried out deliveries and other tasks before moving into the showroom. His work with Lance carried on throughout his degree at Canterbury Christchurch University in music majoring in piano (mostly jazzy stuff he says) and then an MA, by which time he had risen to the level of showroom manager.

Following university, Damien carried on working in the store for a time, before deciding to put his degree in music to more use, moving into teaching and performing, playing in restaurants, hotels and travelling abroad too. After following this path for around six years, Damien decided that teaching long-term was not for him and wanted a return to the AV world, combining his past experience and love of music. Returning to work in the shop in Tenterden, he also took on work at the Canterbury B&O store, eventually taking on the full-time post of store manager at Canterbury.

Damien explains, “My time in the stores gave a wide experience of many brands, not just B&O, and also how the install side of the industry works. We worked with Custom Sight and Sound (CSS) as their supplier of B&O products and I began talking to the company about a role there. Around for 25 years, it’s a hugely experienced install business headed up by Ian Bolt and I wanted to be part of what the company was building.

“My role now as sales executive is to build relationships with the architects, interior designers and developers to educate them as to what we can offer. We do this in a number of ways, but a major one is in presenting CPD courses; CEDIA courses are a big help here. We not only educate people in related fields, but that of course also builds our profile and trust in what we can deliver.”

Damien adds, “Another way we do this is taking interested parties to experience the various demo facilities that are available here in London and close by. In fact, I have just come from a session showing some M&E consultants around the Crestron Experience Centre in Chelsea. I have been in the role now for around nine months and I love it. Being able to work with someone experienced as Ian is a joy and I am enjoying being part of a major push from the company to expand its business and increase turnover which has doubled in the last two years.”Exploring all avenues

Other avenues of work come from Ian’s extensive contacts developed down the years and also contracts CSS has with other companies such as N.G Bailey, a major servicing and support operation based in London. CSS helps N.G Bailey out with much of its servicing involving technology and of course this brings CSS into contact with rooms and set-ups ripe for upgrade or completely new systems. Damien says that, “around 80% of what we do comes via contractors that we work with.”

One major part of this expansion is CSS Cinemas, a fresh way of targeting customers who simply want a stand-alone high-performance cinema. The company has always done cinema, but as Damien explains, “We felt that there is enough demand and need to offer a separate, often turnkey solution to private customers and commercial ones who are looking for a really high-performance cinema. So, the new website we have created concentrates solely on cinema showing past projects and educating customers on what is possible now.

“Just personally, I have never enjoyed or understood the point of going to a commercial cinema as a social experience. For a start, the performance is often poor, and basically you sit in a dark room with lots of strangers in silence. What home cinemas deliver is not just way better performance, but control of the social side of cinema. You get to enjoy it as a family or with close friends and the experience is transformed.”

The website showcases some of the top work the company has done already, including a fantastic looking communal cinema that was installed in the Pan Peninsula development on London’s Canary Wharf around 10 years ago, which has just under-gone an upgrade. The cinema includes a Screen Research 160in screen, a just installed JVC Z1 projector and a Procella P8 speaker system. An Anthem AVM60 AVR, Krell Power Amps and a Crestron Control interfaced with iLight round out some of the other tech.

Damien argues, “Competition is really fierce now amongst developers in London; a communal cinema is one way they can really make a difference to their buildings. The default setting used to be gyms, and those still happen, but as these become expected and a little less popular as people look for other ways of exercising, a cinema is delivering a wow factor a gym can’t. Developers are able to simply give us the key to the room and let us get on with it, when we give the key back, a fully functioning knock your socks off cinema is inside.”

Damien also believes that dedicated is where its at, “We do create media rooms appropriate for mixed use, but we prefer to recommend and create dedicated cinemas. That is where you can really create an experience right at the top in terms of performance and deliver something the client will love. That is the whole point of introducing CSS Cinema, to drive home to people the impact on their lives it can have. It’s an investment in family life like a holiday or a new car can never be, and through our service contracts we can make sure it stays in top condition for ever.”

Kit wise the company does try to stay fairly agnostic, but Damien does say, “In creating our cinemas we work with lots of companies, but we do lots of projects with Pulse Cinemas. We like the brands they are offering; the showroom is great and relatively close by. Ian and Kapes (Kapes Patel, technical director) have known each other for years, so there is a strong relationship there.”

Damien is also a fan of the Trinnov line-up with its power to deliver really top-end cinema performance. In fact, the brand is going into a cinema the company is creating in France currently.

“Kaleidescape is also a great system,” says Damien, “and it just got a whole lot more attractive with the Strato 4K system.”

Meridian is another popular brand within the company, as are Anthem, B&W, JVC, Barco, Sim2 and Screen Research.

A subject we have been talking about a lot recently is installers selling more quality two-channel systems. With his love of music, Damien is on-board. “We would love to sell more two-channel. In fact, that is what Ian’s background was before moving into supplying full AV cinemas and automation. One of the company’s oldest customers was originally a two-channel customer before we supplied him with a cinema, our very first one many years ago, so there are loads of customers and clients that we could help in that regard. With high-res music getting easier to deliver these days, two-channel and music delivery systems are in great shape. These days you can have the convenience and the performance, so why not.”

So busy times then, Damien confirms, “We are around four weeks into the launch of CSS Cinemas and we are really happy with it. There is work to do, we want to add more content and improvements to the website, but really the exercise is a case of marketing effectively the skills we already have and offering customers a one-call cinema solution. CPDs will be a part of that, CEDIA will be of help here, but we would like to develop our own courses too.”

This article originally appeared in the pages of Essential Install Magazine.