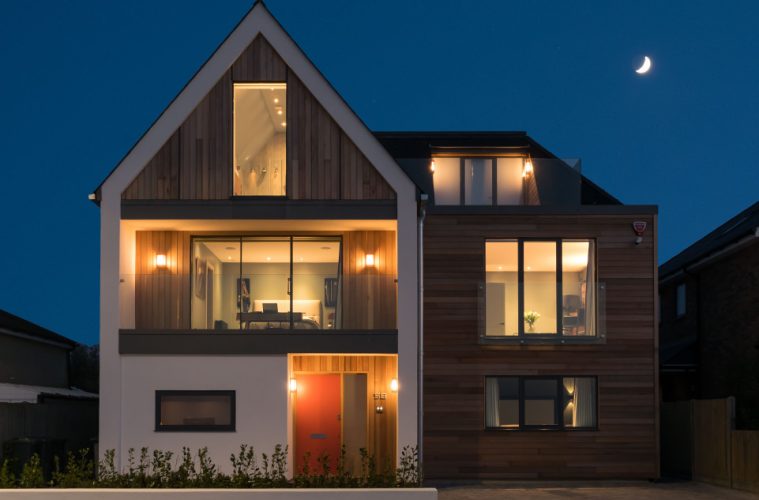 Philharmonic AV, A Show Home With A Difference

Warmly welcoming CE Pro Europe into his striking seaside home on a warm afternoon in June, it is immediately clear that Phil Turner – founder of award winning AV specialist company, Philharmonic AV is a family man through and through.

“Kids grow up so quickly; it is important to try and be here with them,” he says after introducing his young children Monty and Dolly and wife Amy.

“What I’m trying to do is to make sure that everyone at Philharmonic AV has a nice balance between work and home life. Now that the company is really established, gone are the days where everyone was answering their emails at all times of the night; if the engineers work too much we try to give them more time off. I’m even trying to have a day off a week to spend time with my family.”

You only need glance around the modern and stylish home to see why he is keen to spend more time there.

Phil set up the company just over five years ago with an idea to go further; to offer something different.

And what’s more different than living in a show home displaying the technology your company has to offer in a real-world scenario?

Previously based in London and prior to founding the company, Phil called in an AV company’s help to bring his home into the 21st century, finding the quote to be astonishingly high.

Unfortunately, that company went bust halfway through the project. “And then the second company we tried was awful,” he reflects.

“The service was not good and the architects I spoke to told us that they were used to experiences like this with some small companies, who are used to moving quickly from one job to the next, only worried about the money. Obviously they are not all like this though!” he adds quickly.

From this, Philharmonic AV was born. “I wanted to be able to offer someone an exceptional service and from there the business has just grown through word of mouth via relationships with professionals, like architects and designers. Now we are looking for more local work in Kent, but due to the nature of what we do it is important that jobs are of a certain scale so that we can get stuck in and make a difference – and most of those tend to be in London.”

“The advantage of living here as a family is so we can work out how to add automation to add to how we use it, as opposed to another gimmick”

Not that he turns his nose up at London business by any means.

Situated smack bang in DFL (down-from-London) central, Phil’s choice of home by the sea in picturesque and popular seaside town Whitstable has turned into a shrewd business move.

Just over a one-hour drive from the UK capital, Whitstable boasts all that Margate used to offer city dwellers keen to escape for the weekend, with more focus on small, independent shops and less on rows of arcades.

With his newly kitted out 4,800sq-ft show home, Phil is offering his London clients a real reason to visit and see the solutions the company has to offer, acting as a customer and an end user himself by making use of the technology on a daily basis in his home.

“We specified all of this with the family in mind, but once it was done I realised that we offer everything here that we do for clients,” Phil explains.

“Most of our clients are in London, so we would usually invite them up to our proper ‘office’ showroom which is about 10 minutes away from here. Now we can say: ‘If you are interested in our proposal you can come and see the lighting and the blinds, security, the control systems and the cinema – all in one place’. It’s a lot easier to get people outside of the M25 when you can show them everything.”

Despite only having moved in a few months ago (not that you’d know it by looking at the place), Phil is pleased to report that he has already had a number of clients – both local and London – visit his show home.

And what a home it is, boasting a home cinema, a media room, a listening room, Savant whole-home control, Lutron automated lighting, curtains and blinds throughout, an eight camera IP CCTV system, the integration of 18 independent heating zones, video door entry and an internal intercom, a motorised garage door and access gate, distributed audio to 13 zones and video up to eight rooms, a robust networking infrastructure combining managed Wi-Fi and hard-wired network points, not forgetting the huge golf simulator room located at the end of the garden (it isn’t CEDIA nominated for nothing).

“We put this in for family use rather than business and we designed all of the wall treatments ourselves,” says Phil upon entering the room.

Wrapped around the entire back wall is an imposing HD Golf high spec Championship Curve system, which is connected to the video distribution system, meaning that sports games or games consoles can be projected onto the 3.3m x 2.5m screen.

The room also includes a wall mounted 40in display, whilst powerful Artcoustic loudspeakers and subs are concealed behind stylish grilles on the wall opposite the main screen.

The acoustic wall treatments mean the speakers can be turned right up for a club-like atmosphere using the Savant control system. “You don’t just have to watch golf when you’re in here,” he laughs.

The control system has been designed to be as simple to use as possible; the iPads and keypads located throughout the house control everything from the blinds to camera sources, incorporating frequently used lighting ‘scenes’ for each room.

“We have gone to quite a few jobs where they have 10-button keypads everywhere, where for each one you have to double press for scene 14, for example, so we want it be as user friendly as possible.”

In fact, even Phil’s children understand how to use the system, as Monty demonstrates by controlling the blinds, garage door and lighting scenes throughout the house.

Moving into the open plan kitchen (also referred to as the media room), Phil points out that the space is integrated with Lutron to turn the audio up and down. Meanwhile, the electric blinds are nestled behind discreet pockets.

A charming door within a door then leads CE Pro Europe to the children’s playroom, where the control system is set to turn the TV onto CBeebies, although Phil is currently thinking of ways to integrate voice recognition into the room to choose channels.

The family’s cinema room is particularly impressive, and that’s not just down to the décor and mood lighting.

Inside sits a 7.2.4 Dolby Atmos surround sound system with Artcoustic speakers, a HD projector with 4K up-scaling and a 100-in 4K acoustically transparent screen.

The centrally located video and audio sources are available in the cinema, along with the CCTV system.

“My team installed all the fabric lining and treatment for the walls and put foam behind the speakers and the screen,” Phil points out.

Additional cinema sources include an Xbox One and Kaleidescape M500 player, which connect to the Denon AV receiver.

All elements can be controlled via Savant using the dedicated Wi-Fi remote or the iOS App, although this will soon be supplemented with a local Control4 solution to demonstrate an alternative control system.

At this point Phil sheepishly rolls up his left sleeve. “My official excuse for buying the Apple Watch is that it integrates with the system,” he says, demonstrating the different Lutron lighting scenes in the room.

A wall-mounted display has also been installed and the sound system is connected to the video distribution system via HDMI, allowing audio from the TV to be routed through the speakers.

The warmth and depth of sound is immediately apparent as Phil starts the demo. “I just fell in love with these speakers. They don’t offer 5.1 or anything; they are pure two-channel, but it’s good to be able to show people. We had a musician come here recently who plays the piano on TV talent shows when the acts rehearse and he was very impressed.”

Moving on to the children’s rooms, these each feature cameras, “which will obviously be removed when they are older!” which are used when Phil or his wife are in the golf simulator room, the feed linking back to a panel in there.

“We can keep an eye on them this way; sensors alert us if they come out of their rooms and we can stop what we’re doing and make an announcement. Otherwise we wouldn’t use the golf simulator much as we would be worrying about them.”

Interestingly, Phil and his wife paid for all the technology in the house themselves; the business doesn’t own any of it.

“If we had a standard showroom, we would have only been able to show certain separate things, such as have an office room with blinds, a listening room, but we wouldn’t be able to show everything that we do and how it all links together. It would have cost so much and would not have been in use. So the other good thing about it is we are using it all the time so we are able to find out any niggles.

“The advantage of living here as a family is so we can work out how to add automation to add to how we use it, as opposed to another gimmick. We did it all for ourselves and in the process of doing it realised how it was what we were missing when we were going to show clients what we could offer them.”

Since the new show home has been completed, Phil has seen a steady stream of both London and local clients enlist Philharmonic AV’s services, with more architects scheduled in for visits in the next few months.

“Obviously we love all of our London clients, but we would love to have more local work. Someone has to have quite a substantial scope for a project for it to make sense for our business, but we bend the rules a lot for our local stuff,” he smiles.