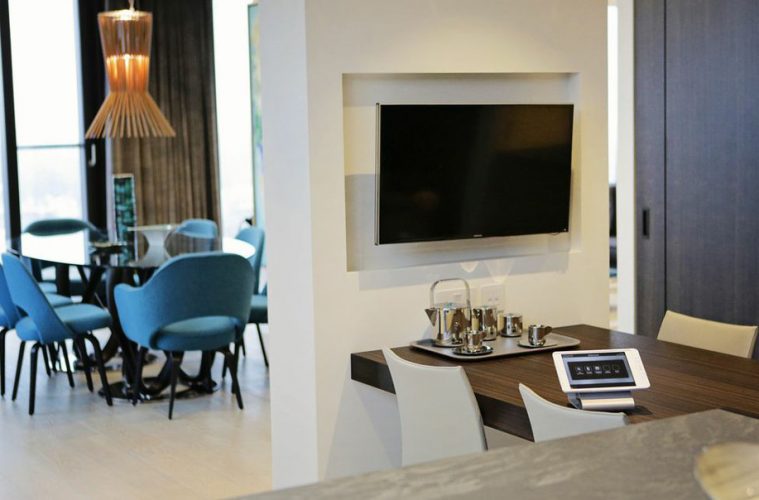 Just a stone’s throw away from London’s Hyde Park and the West End lies 3 Merchant Square, a showcase for thoughtfully designed apartment living.

As with a growing number of stylish, modern apartments, most are designed to simplify life; the technological provision being no exception.

The impressive 21-storey building boasts its own first-floor nursery, a winter garden and a total of 10,000sq-ft of retail units.

The tower’s apartments not only benefit from a vibrant and cosmopolitan location, but also from services such as 24-hour concierge and security.

Their high-end internal specification includes mood lighting, under floor heating, bespoke kitchens and joinery as standard, as well as their own cable management solutions to ensure that nothing detracts from the stylishly minimal interior.

3 Merchant Square’s development manager, European Land knew that it had to offer the apartments’ eventual owners more for their investment, specifically in the form of home automation systems.

Reaching out to Konnectiv to complete the implementation and installation of such a system, the development has now been further enhanced by the installation of an AMX infrastructure and integrated NetLinx control in all apartments, allowing the developer to make provision for the future technical requirements of exacting purchasers, without dictating what those exact technical requirements should be.

“Konnectiv are one of the leading home automation consultancies in the UK; we were introduced to the project because of our experience and reputation, as a ‘safe pair of hands’ to put the design and project in,” comments Kris Hogg, founder/director of Konnectiv Technology Ltd.

Potential purchasers looking to discover what is technologically possible need look no further than the development’s penthouses.

Commanding impressive views across the city from their dual aspect balconies, these properties have been enhanced with a thoughtfully designed automation solution.

The automation begins at the front door where a 10in wall-mounted Modero X Series touchpanel provides an intuitive control solution, giving users the ability to directly contact concierge and control the climate throughout the entire apartment.

However this wasn’t without its challenges, as Kris reveals. “There were some specific requirements around the delivery of connectivity to the concierge facilities, which included links to the door entry, access system and to the lifts.”

However the team conquered these technical challenges, as seamless integration between AMX and the URMET door entry system allows users to receive one-way video and two-way audio communication with visitors at the front door, allowing them to see, talk and grant access, all via an easy-to-use interface.

Unusually, this intuitive solution isn’t unique to the penthouses, but has been integrated as standard throughout the development; giving all potential purchasers the benefit of an easy to use door entry and climate control solution, as well as 24 hour concierge support at the touch of a button, plus the potential to upgrade functionality as desired.

“AMX was selected because of the appearance of the touchpanel and our ability to deliver simple, bespoke interfaces that were easy to use and understand,” Kris explains.

The carefully selected technology continues in the main living space of each penthouse with its in-ceiling speakers and eight-zone multi-room audio system, complete with amplification throughout, bolstered by two music players to stream different music to different zones, independently.

“There are 147 apartments in the development and we were handing over 70 apartments every 10 days. Naturally, this is a production schedule that we are very proud of”

A HDMI matrix switcher distributes video around the property, sending content from the various sources, which include Freeview and Blu-ray, to the apartment’s high-definition displays.

Integrated, fingertip control of the audio-visual system, automated blinds, Lutron lighting system and climate control is provided by the AMX TPControl Application, which transforms the penthouse iPad into a fully functioning touch panel for controlling the system platform.

Connecting as a native AMX device to the local AMX NetLinx NI3100 master controller, this App provides real-time, touch control of automation functions, as fast as a regular panel.

Attention to detail is further evident on the iPad GUI, which has been customised with Merchant Square branding; successfully reconciling the developer’s need for brand consistency with a tried and tested interface.

Not stopping there, the system even boasts its own demonstration mode.

With just one touch of the AMX App-enabled iPad, any of the penthouse apartments are capable of demonstrating their own technological credentials.

Pre-programmed macros initiate a series of automated actions; the appropriate lighting scene is set, the blinds close, background music starts playing and the screens turn on and automatically switch to the developer’s marketing content which is stored locally on a Mac mini.

As is usually the case with projects of this nature, timelines were very tight; 3 Merchant Square being no exception.

“There are 147 apartments in the development and we were handing over 70 apartments every 10 days,” Kris recalls. “Naturally, this is a production schedule that we are very proud of.

“I’m also proud of the way we were able to roll out the delivery of the project and that it really did go without a hitch. The interfaces are bespoke to the project and are really simple to understand and the feedback we’ve had from the various apartment owners has been great.

“Personally, my favourite part is the residents facilities suite: we installed a 20-seat cinema, meeting rooms and an integrated music and video system. There is a full room-booking system in there that makes it easy for the residents to link it to outlook and book-rooms automatically. It’s all controlled via iPads on an AMX backbone.”

And what was the all-important feedback from property developer?

“It’s really that we delivered a project within budget, with no variation expense and most importantly on time,” says Kris. “Although they obviously love the fact that the system works reliably and the purchasers find the AMX control easy to operate.”