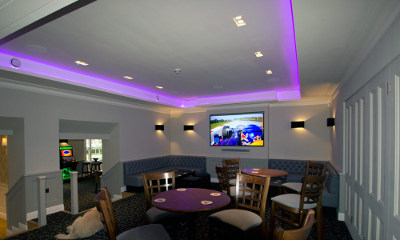 When the Royal British Legion (RBL) wanted to give an AV makeover to one of its premises, the charity turned to a seasoned pro.

The legion, founded in 1921 to offer financial, social and emotional support to veterans of the armed forces, their families and dependants, was looking for a custom install job for the whole AV works and wanted a one-stop-shop approach in terms of installation.

Alan Treacher, director of Harpenden Electrical, was recruited to tackle all the electrical work, AV, network, CCTV, automation and HVAC with a mechanical heat-recovery system.

The company is a well-established electrical contractor business based in Hertfordshire, set up by Alan in 2004 after more than 10 years working in the industry.

One of those builders, which has worked with Alan on a number of projects, brought the company in on the Royal British Legion job.

“My electrical career began with an apprenticeship specialising in heavy industrial installations, a long way from ELV dominating our current work,” says Alan, explaining the kind of career credentials that struck an immediate chord with a charity for which professionalism and dedication to good service are everything.

“Two years spent working in Australia introduced me to Smart Homes. I installed and programmed Clipsal C-Bus systems in prestigious areas of Sydney – you never tire of views of the Opera House. This Smart Home experience, paired with my electrical training, meant on my return to the UK I was in demand for subcontracting work for Hi-Fi and AV businesses.”

Five years of being the “cable guy” resulted in the conception of Harpenden Electrical.

And nine years on, Alan has a growing team of installers working in high-end residential, light commercial and bigger commercial projects across the Home Counties and London.

It was this tour of duty that won over the Royal British Legion. Now Alan’s team had to deliver.

“As well as the expected twin and earth wiring for lighting and power we also incorporated structured cabling into the listed building.

The Cat6 and coaxial cabling gives great future readiness for the distribution of current AV and network requirements. It will also accept new, emerging technologies when available.

“The infrastructure made it simple to deploy URC for total control of AV using Sonos with KEF speakers, HDAnywhere Modular and Samsung 4K screens and lighting taken care of by Rako. The usability of the URC control system has been praised by staff at the Legion who were concerned by this new technology being installed. A simple interface layout has made it easy for them to use.”

If winning over the veterans, and others, at the Royal British Legion to new-fangled technology was a challenge, the building itself threw up other problems.

With the building being listed, every room posed a different challenge, prompting the installers to integrate all wiring and technology with sympathy towards the fabric of the building.

This is where experience comes into play.

“We have the skills to operate in multiple sectors and this is a strength of our business. We have recently been awarded a contract with a national commercial letting agency to provide AV solutions for boardrooms and digital signage in their London HQ. Another big benefit is we don’t have to bring in subcontractors for the electrical demands of the installations.”

Subbies and methods of working aside, it’s the installation job that does all the talking: “We’ve had excellent feedback: it has been great to hear the people in the town commenting on the lighting to the building’s exterior. But as soon as they step into the bar and function rooms they are even more complimentary. The owners and staff enjoy using their ‘hi-tech’ keypads.”

What’s more, the project has led to fresh enquiries from local businesses and homeowners, likely to be as wowed as the Royal British Legion.

Favourite aspects for charity members were the lighting scenes available from the URC and Rako system.

These are a huge hit, enabling staff to set up rooms for different types of events and choose a lighting scene to suit. Great sound and visuals complete this exercise in AV perfectionism.

Alan and his team at Harpenden Electrical forecast ever-increasing demand for their skills as AV and Smart Home sectors take hold in the UK and technology evolves.

Will the CI industry cope with this increasing demand? That depends, reckons Alan.

A fundamental need is for the industry to work better with electricians to deliver projects on time and budget in residential and commercial sectors.

Training the new recruits of tomorrow is another industry challenge: “As electrical contractors we are well used to sending our apprentices through college for electrical training. But we find it difficult to find recognised training for AV and networking specialisms. Some development on this front is needed to attract new blood to the industry.”