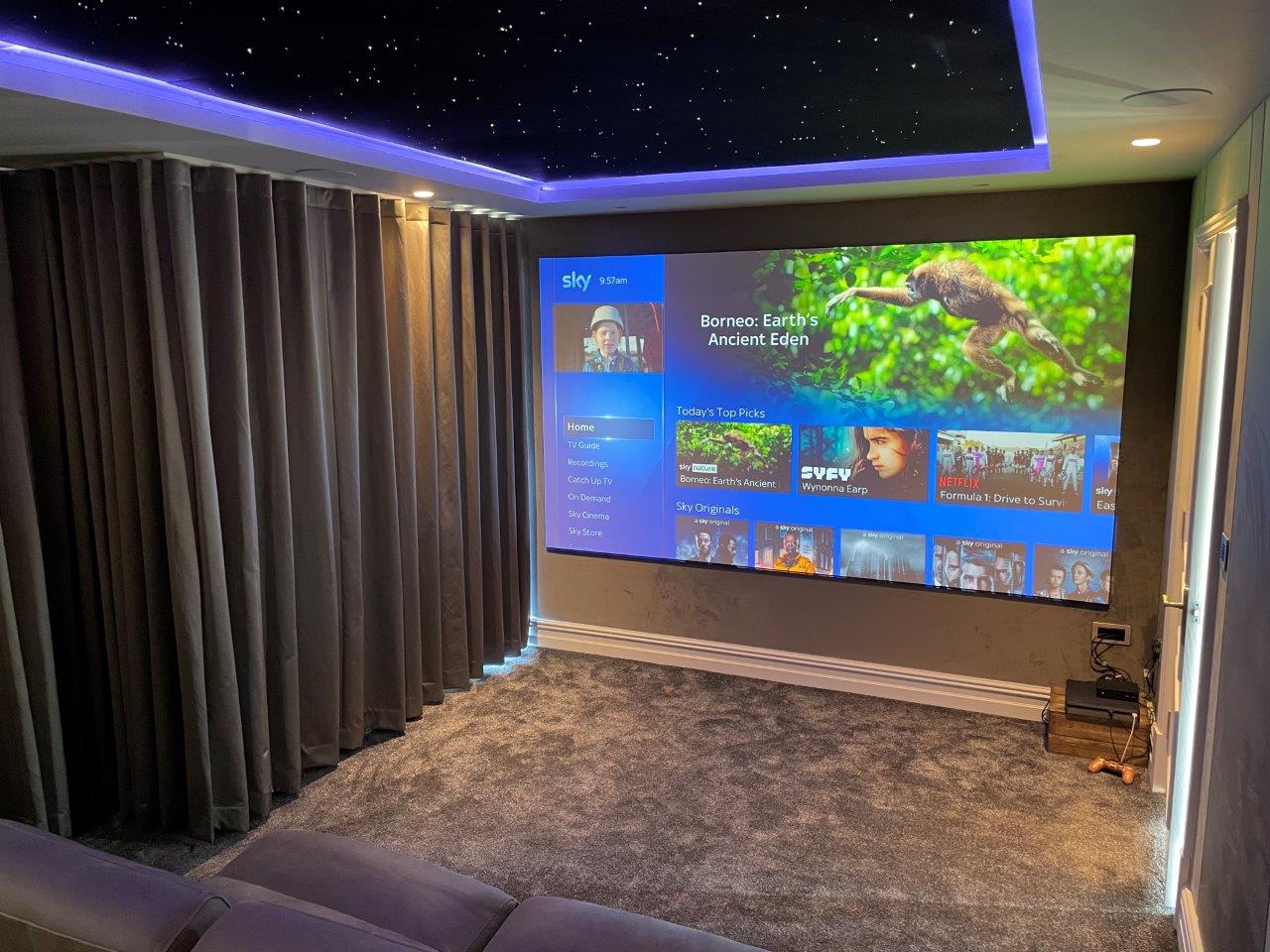 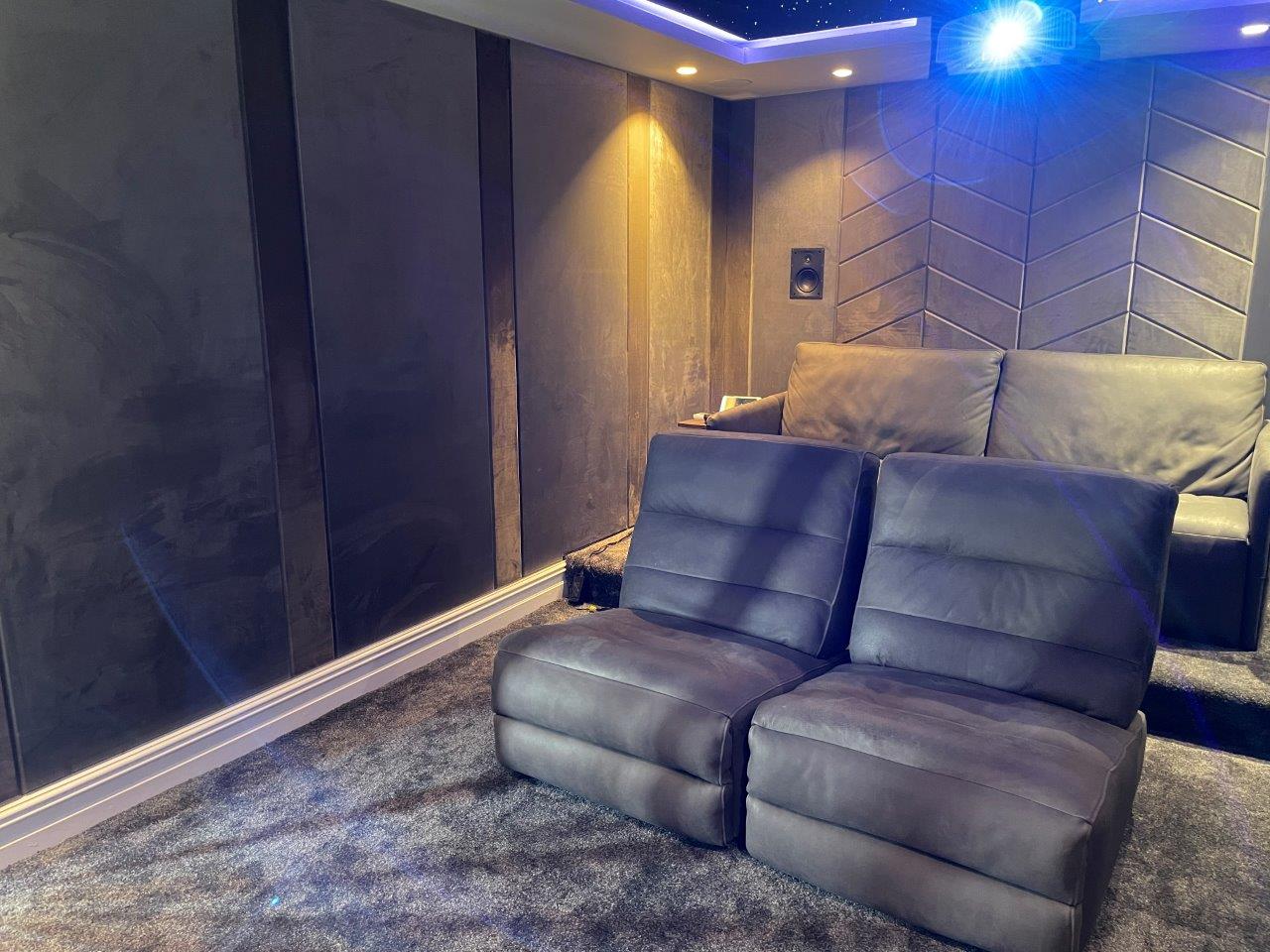 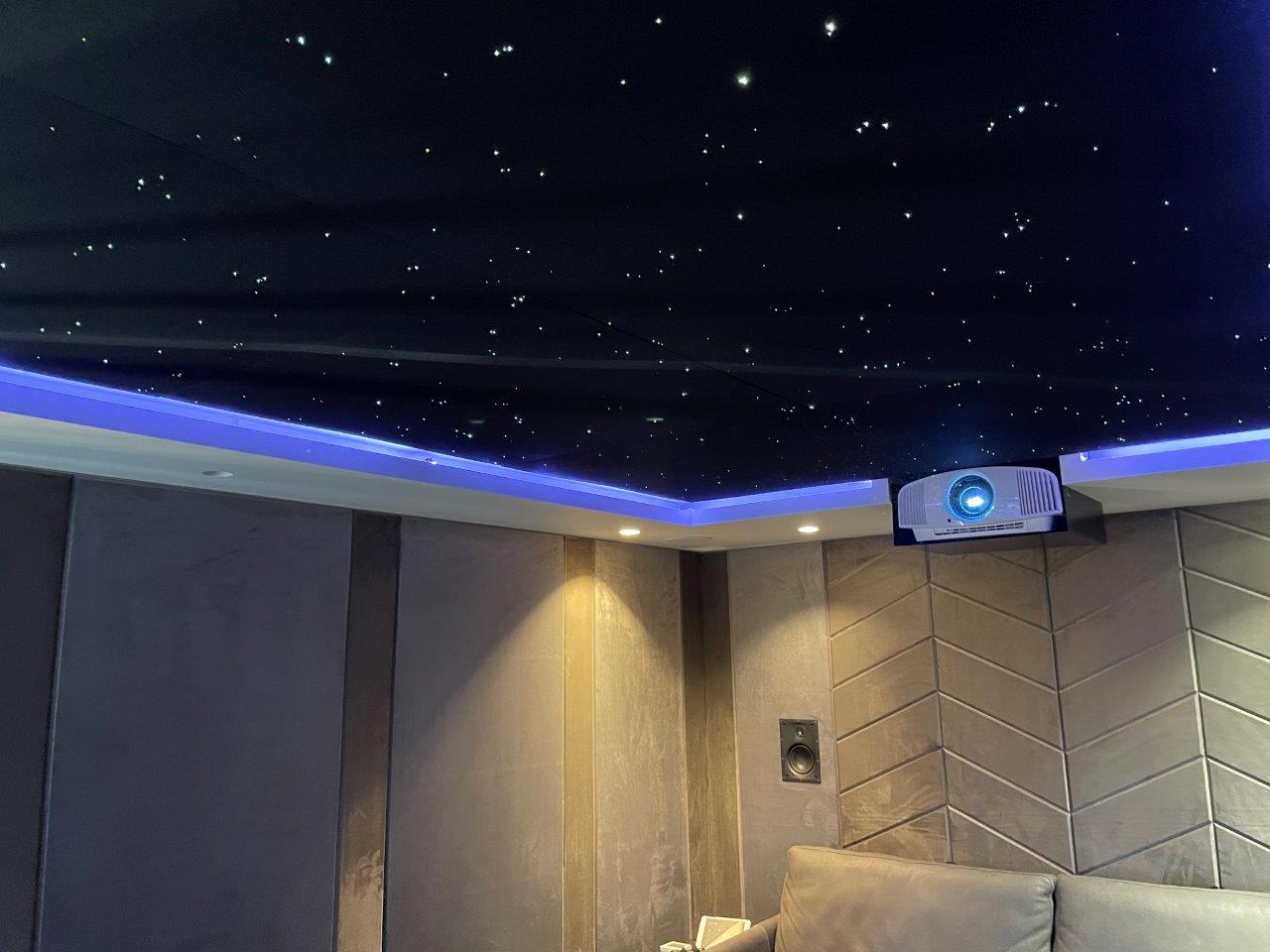 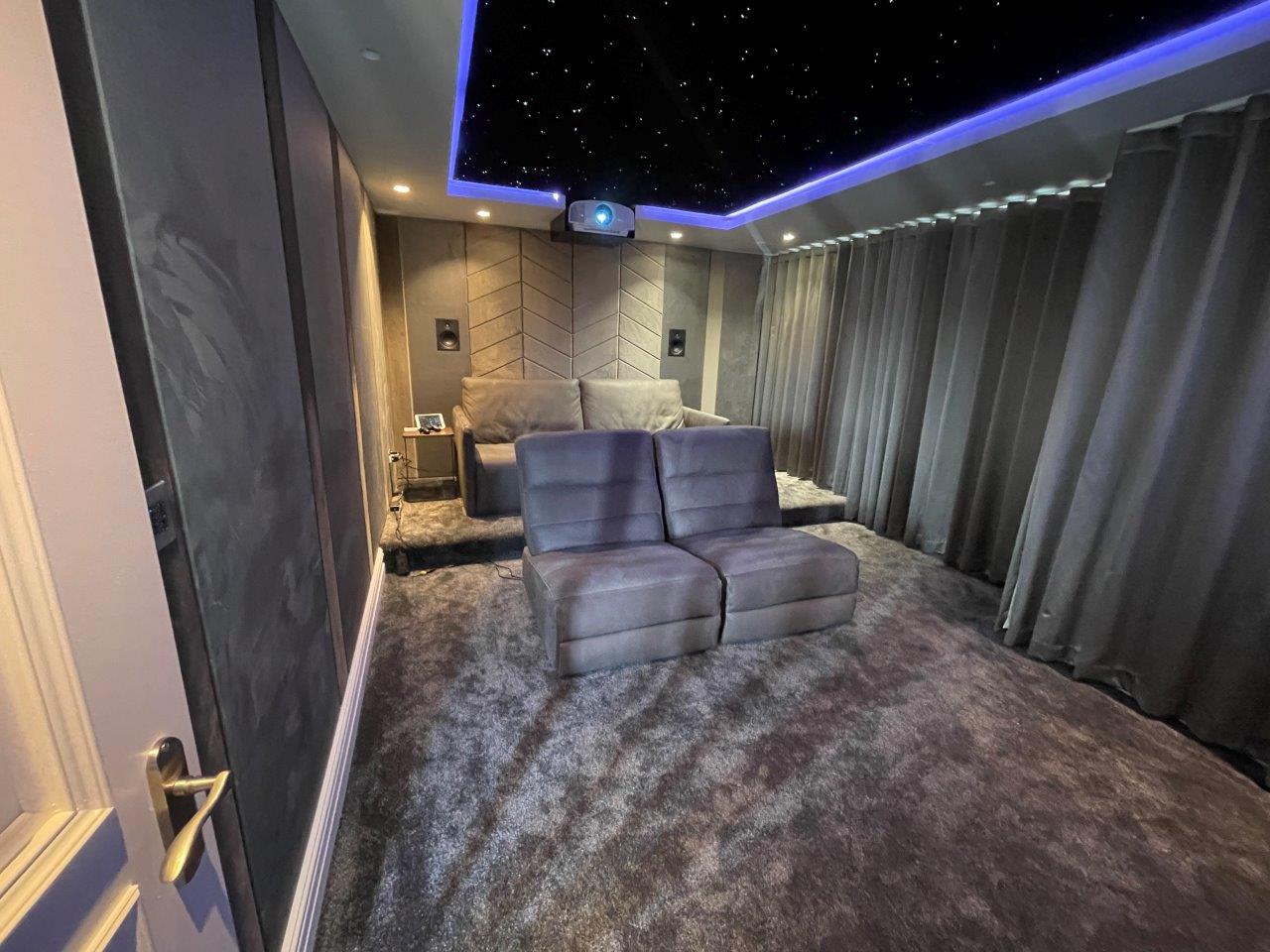 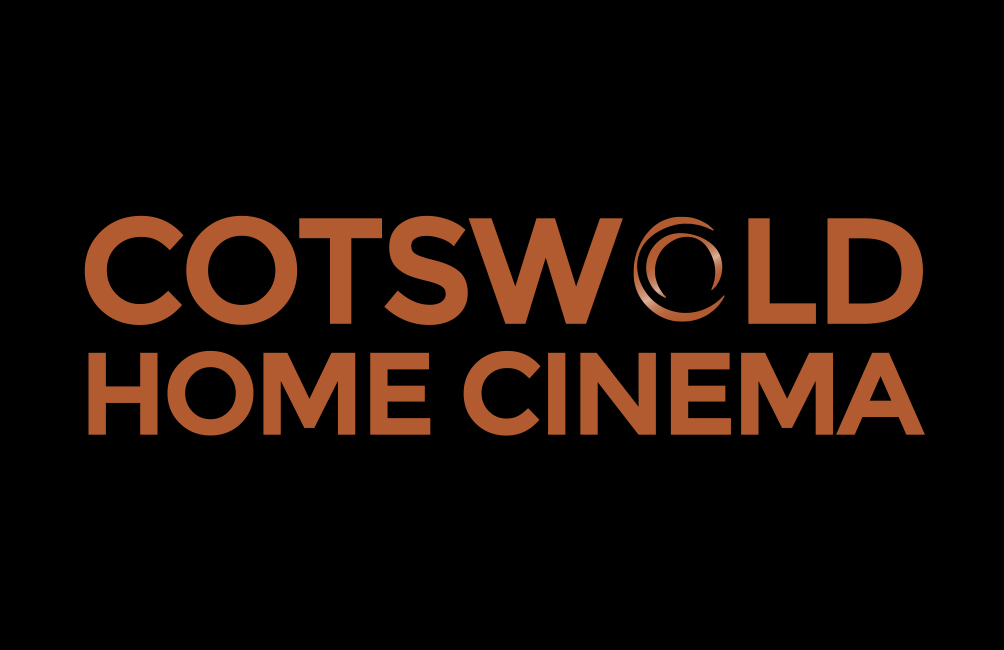 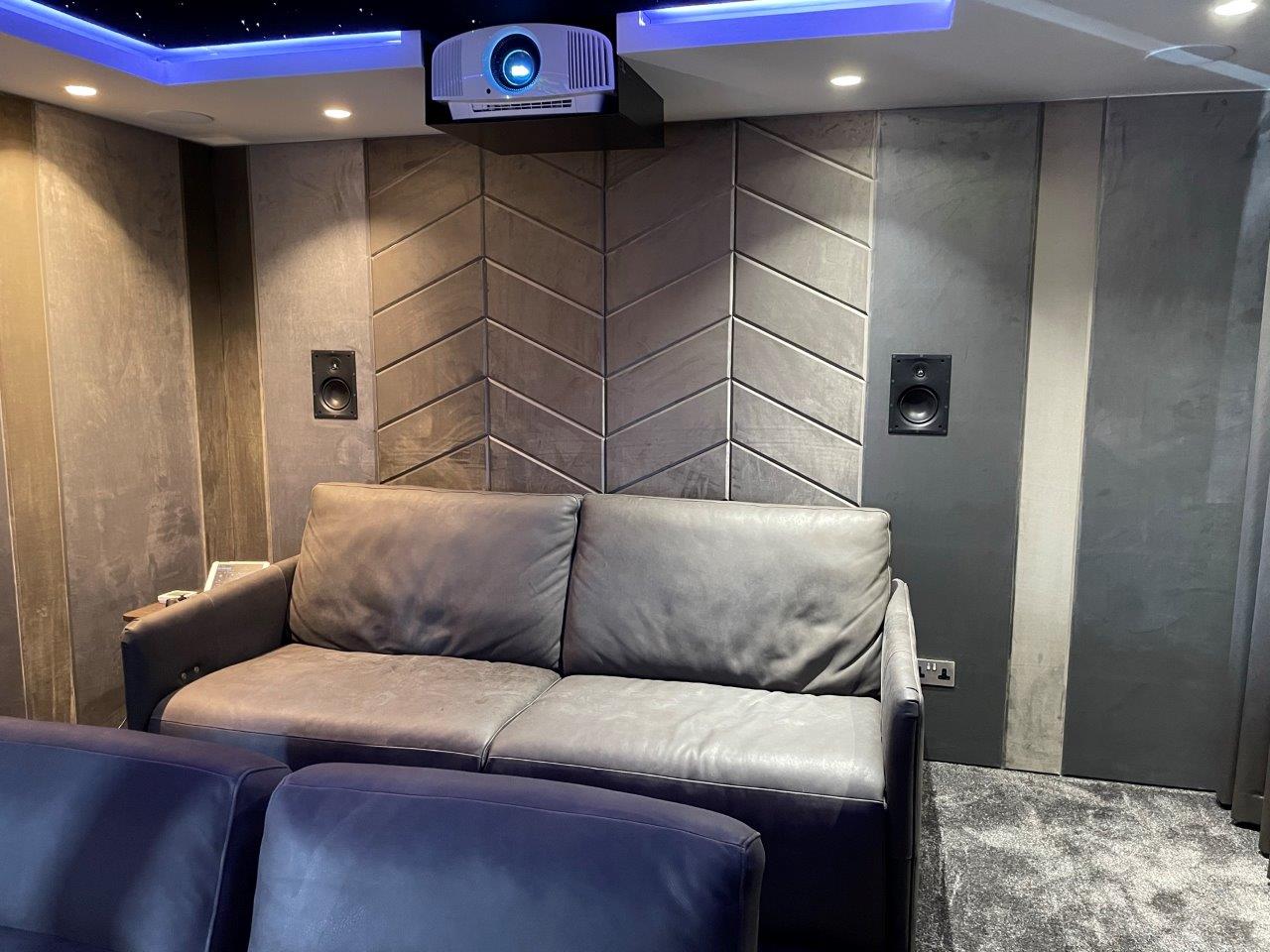 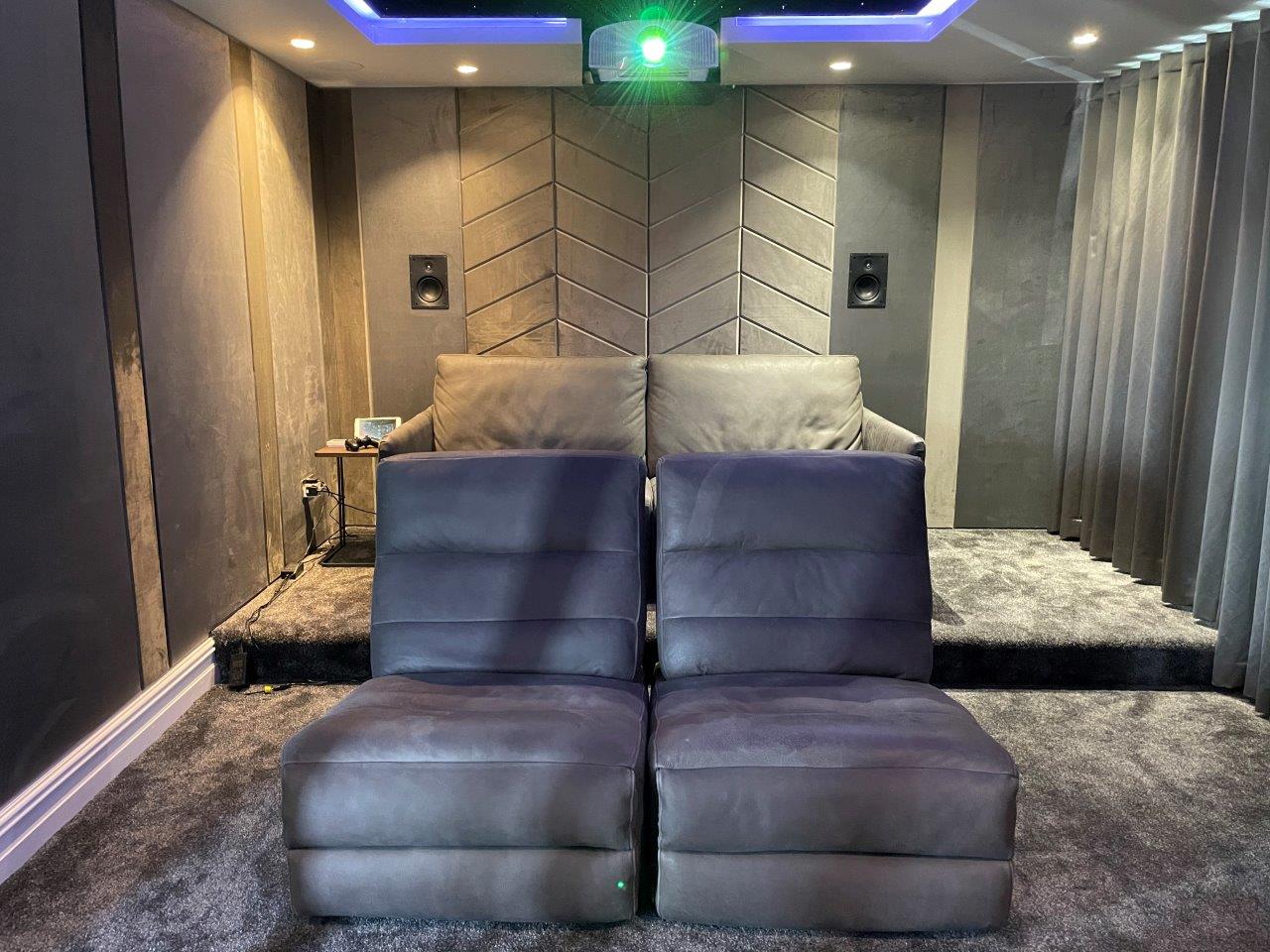 The Cotswold Home Cinema team were approached by a couple who were building their own home and were asked to design a cinema that would be suitable for use by the whole family – two adults and two younger boys.

The couple are keen car collectors and wanted the room to somehow subtly reflect their love of cars, but they had no idea of how they wanted the finished room to look, so were open to suggestions. Having talked through the different options available, the design team suggested a duo of velvet materials to use on the walls, as it was felt this particular fabric resembled the Alcantara that’s often used for car interiors. As this material is not acoustically transparent, the team designed the room to have in-wall speakers that would be on show, as hiding them under the material wasn’t an option. They wanted the design to be fairly minimal, but with a feature of some sort at the back of the room, so a chevron panel, which again fitted nicely with the brief was created.

Budget for the room wasn’t huge, so careful consideration regarding the system design was needed in order to ensure the best possible experience was achieved, whilst remaining within the specified budget.

The system comprises: a 5.2.4 Paradigm speaker package with in-wall and in-ceiling speakers and in-wall subwoofers; a Sony 270 Projector; a 2.8M Screen, which was custom-built to make the most of the space available allowing the biggest screen size possible whilst working with the available wall-space, seating position and throw-distance limitations.

When designing the room, Cotswold Home Cinema had to allow for the fact that the room was oddly shaped, as there was a corner section on the outside wall that created a bay on one side, and the entire length of that wall was glass. Whilst these factors didn’t adversely affect the speaker positioning, they did make managing the amount of light coming into the room very difficult, as it was extremely bright during daylight hours. The company overcame this obstacle by working into the design a full wall-length curtain that also helped with the acoustics, as it was not possible to apply any acoustic treatment to that particular wall.

The feedback received from the customer has been incredible, says the company. Taryn and Jim Higginson-Keys, founders and owners of Cotswold Home Cinema report, “They love the room, they said the design was exactly what they wanted, even though they didn’t have a set design in mind when we started! The boys absolutely love using the room too, and they’ve reported to us an increase in the number of friends wanting to come round to theirs since the room has been finished! It gets used all the time for watching films, the boys adore playing their PlayStation in there, and they frequently use it when they have friends round, bringing in extra beanbags to accommodate more people.”

The cinemas performance in a relatively small space was further enhanced with careful calibration of the system to allow for an excellent viewing experience, regardless of which seat the viewer is sitting in.

This room was a recent and very worthy entry in the Smart Building Awards and narrowly missed out on being placed in the award winners circle. The room was rated highly for the level of individuality and performance the team managed to achieve, whilst remaining within quite a constrained budget.