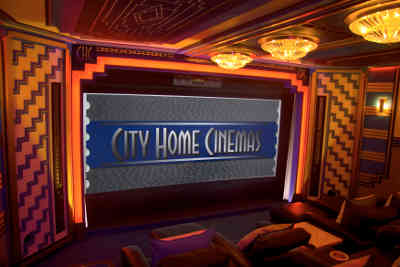 Situated in an unassuming part of South London, CEPro Europe arrives at the HQ of City Home Cinemas to be met by Peter in a wonderful art deco style reception area, a hint at what was to come from the cinema room, but first, time to learn from this experienced and sharp witted entrepreneur, how the company came into being.

Peter explains: “City Home Cinemas was born from our house renovation business City Heights which deals in high-quality projects mostly in the centre of London and began in 1997. Gradually as the technology available in constructing home cinemas began to improve, I realised that we could re-create in our clients’ homes a genuine cinema experience which mixed the magic of the golden age of cinema which offered a feeling of excitement and luxury, with very high technical performance as well.”

I realised that we could re-create in our clients’ homes a genuine cinema experience which mixed the magic of the golden age of cinema which offered a feeling of excitement and luxury, with very high technical performance as well.”

The inspiration for this concept can be traced way back to 1983, when Peter had parted from a previous business and started looking around for a live venue/snooker club to run.

He found an old boarded up cinema in the heart of London’s Camden Town. After some difficult negotiations, the Rank organisation agreed to offer Peter a short lease on the building. However, after inspecting the building everything changed.

Peter explains: “After seeing the building inside, despite its bad condition, I just fell in love with this beautiful Art Deco cinema which bought memories flooding back of how magical a trip to the cinema used to be. Way back in the past at the start of my working life (when I was mending chariots for the Roman legions) I remembered that a trip to the cinema used to be about luxury, excitement, a real proper night out. It was then that I decided I would make this cinema live again and usher in a new golden age of cinema going for the residents of this part of London. After a huge effort, we eventually opened in December of 1983 with the rather aptly titled Sean Connery Bond film, Never Say Never Again.

“Unfortunately for us, despite bringing this beautiful cinema back to its full glory and installing the best kit available, the following year was the worst on record for cinema attendance and there was also a writer’s strike in Hollywood which meant good content was very thin on the ground.”

Despite a difficult start, Peter stuck to his guns, dealing with the unwillingness of the big film companies to give him top product as he was an independent.

However, as the reputation of the cinema grew, he began to break down the barriers and a big early success was the when the cinema secured the now classic British cinema favourite, David Lean’s A Passage to India.

Peter says: “The takings for that film were so good it meant we had an in with the distributors and we were able to continue getting great titles like Indiana Jones and the Temple of Doom. As important as these great titles were, a trip to our cinema was always about much more than the film. The place was a genuine palace, it felt special just to be in that space. We also added touches such as having a live band playing in the foyer, girls selling ice creams, I used to introduce the films to build excitement and we would treat people like royalty, showing then properly to their seats and lining up to say good night as they left.”

The main cinema found so much success that Peter eventually decided he needed an other screen and set about converting a disused café above the main auditorium.

This smaller scale 100 seat cinema was no less luxurious or technically accomplished and found success screening movies lie Amadeus and although he might not have been aware of it at the time, provided some of the inspiration for City Home Cinemas.”

The success of the Camden cinema continued with Peter getting involved in the fledging British Film Year initiative offering his services to the committee who came to see the cinema and were mightily impressed.

Gaining first local notoriety with awards such as the ‘Best Cinema In London’ and then nationally with an award from the BFA for services to British cinema, the venue was featured in the national news and also secured several premiers including titles like Last of the Mohicans.

“We maintained our position as the best cinema in the UK for 11 years and in Hollywood they called me ‘Mr Europe’ as they reckoned we had the best cinema outside the US. However, eventually all the legal ragingly that it took to keep the place open began to take its toll and the last film we put on was Jurassic Park. There was a big out-cry when we decided to close, a local petition got thousands of signatures, so much so that the local MP had to involve himself and he told me ‘I’ve got no choice but to get involved, you’ve got more signatures on this petition than the votes that got me elected’. However, my mind was made up and we closed when our sold out run of Jurassic Park ended.”

What was next for Peter? Read on to find out…

Recreating the magic of cinema

Peter had always kept up to date with the most recent technology, the commercial cinema had always up-graded when improvements were available such DTS and in fact the cinema’s last film Jurassic Park, was the first cinema release to feature the technology.

This continued interest lead Peter eventually to thinking that it would be nice to build a cinema in a disused space in the offices of his City Heights business, which had launched in 1997.

“To this end I visited the ISE show, I think in 2006 and saw one of the first 4K projector demonstrations from Sony and I though it looked pretty good. Then I think I read something, probably in Home Cinema Choice, about DNP home cinema screens. I went to meet the distributor, Genesis Technologies and also got a handle on brands like Wisdom on the speaker side of things. Again I was impressed with what could be achieved and we began plans to build a cinema below our company offices.”

It was at this point that Peter met his now right hand man in the City Home Cinema’s project, as AV guru and all round home cinema expert, Graham Goodbun was part of the Genesis Technologies team building the new cinema.

Graham explains: “We began building the cinema I guess around two and half years ago now, but right from the start I could tell Peter was absolutely passionate about cinema and wanted only the best. In a nice piece of synergy, I actually used to live right around the corner from Peter’s cinema in North London and remembered the reputation it had locally.”

Another trip to the ISE added Datasat/Auro 3D technology to the growing arsenal of high quality kit going into the cinema and it was at this point that Peter began to realise that pulling on these high-quality brands and the resources of his refurbishment company together, meant he could help re-create real cinemas in people’s home, rooms which would build tension, excitement and feel luxurious, before the curtain even opened.

Peter explains: “I realised that with technologies like Auro 3D and the brands we had assembled together, you could finally re-create the quality that audiences used to get with the older technologies like six-track audio mags and 70mm film.”

So all Peter’s passion and no small amount of technical knowhow on the part of Graham have been poured into the demonstration cinema that now forms the beating hear of City Home Cinema’s introduction to its concept, so it ought to be pretty good right?

Unsurprisingly, it is – more than good, actually and as Peter promised, you feel special as soon as you sit down.

The room is presented in Peter’s favourite Art Deco style and introduction music swirls around the room as you take your seat. In order to show how the Auro 3D up mixing capability can breathe new life into older content, CE Pro Europe was treated to the opening scene from Master and Commander: The Far Side of the World.

Knowing this scene particularly well served to underline how exciting the new age of three dimensional sound technology is going to be.

From the subtle sounds of the water lapping around the ship as the crew slowly awaken, to the timber splitting roar of the battle scene, the film was completely transformed into a new proposition.
Other sequences such as the opening to Star Wars, A Hew Hope, also underlined the validity of what Peter is going for with this project.

CE Pro Europe was seven years old again as that huge ship rumbled over-head, into the shot and into movie folklore.

Getting the technical lowdown from Graham, the room, as well as its wonderfully constructed and beautiful interior, boasts a Digital Projection 4K Laser projector, a DNP Epic Super Nova four metre screen, a mix of Wisdom Audio Sage and Insight series speakers and a combination of a fully loaded Datasat RS20i processor and some ADA amplification.

A Kaleidescape delivery system and some Rako lighting all controlled via Control4 complete the picture.

So with the cinema complete, City Home Cinemas is ready for business, offering installers a place to bring clients to be wowed by the cinema and discuss what the company’s comprehensive package of refurbishment skills and cinema design can offer.

A truly scalable package, the company believes it can offer something special to a wide range of clients, the only thing they need dot have in common, is to share Peter’s passion for cinema.