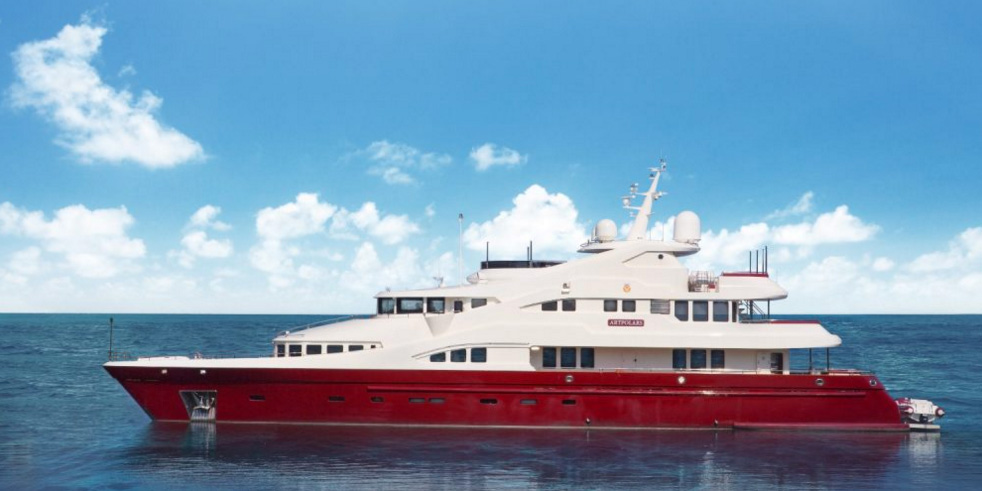 All lights, motorised shades and A/V gear are integrated and designed to function as one unified system; effortlessly monitored, managed and controlled by the yacht owner and his family and friends from a variety of wall-mounted keypads, handheld remotes, touchpanels and mobile devices.

“Yachting is the owner’s passion and is his second home,” says Alexey Popov from BSI Ltd., a systems integration firm based in Ukraine. “Therefore he wanted his yacht to have all of the high-tech features you might find in a luxury home.”

Exactly which types of features, the owner didn’t exactly know, but after visiting the BSI showroom, he was able to nail down his preferences: “elegant lighting control and a 3D cinema” being top on his list.

Based on the finishes and furnishings inside the yacht – intricate woodwork, marble flooring and lush upholstery – dimmable lighting was a natural choice of system for the ocean cruiser. More than 600 circuits of lights, including colored LEDs and special yacht luminaries, were hardwired to a Lutron HomeWorks QS system.

Using Lutron programming software, the BSI designers and installers carefully choreographed the operation of the lights so that one touch of a button would brighten and dim groups of fixtures, including recessed cans, lamps, sconces and LED strips, to the perfect intensity levels to complement activities that commonly take place on the yacht.

“We used best-in-class products, all carefully engineered, so there was no risk of failure when the yacht was out at sea,” Alexey says.

A failsafe design continued through the 45 Lutron custom-engraved, brass plated keypads that would adorn the walls of the yacht. Unlike the head-scratching that can occur when using standard dimmer switches, there’s no guessing as to which button controls which lights thanks to the engraving on the keypads. Clear, concise labeling which is backlit to remain readable in the dark is particularly helpful for any guests who join the owner for an overseas trip.

“For example, in every cabin we provided a keypad with a special ‘night’ button that when pressed, illuminates a dim pathway from the bed to the bathroom,” Alexey explains. “It’s simple, convenient and because the lights are dim, won’t wake up anyone else.”

Sivoia QS Wireless shades – also controllable via Lutron keypads – are another high-tech amenity found in each cabin and throughout Artpolar, where 59 roller shades and four drapery tracks block out the sun when necessary.

Guests staying in a VIP cabin are also treated to a flat-panel TV with a 5.1 surround-sound system, Ad-Notam mirror TVs in the bathroom and access to audio and video content stored on a 48 terabyte media server and satellite TV channels around the globe.

Guests can even view the ocean life from the comfort of their cabins. Four high-def underwater cameras capture the action and any TV can tune in at any time. There’s no need to leave the comfort of the bed to access the underwater cameras or any other piece of A/V gear – a handheld RTI remote in each cabin puts the power to control every A/V component in the palm of a user’s hand.

As well-equipped as the cabins are, most of the fun happens in other areas of the yacht, where technology continues to play a prominent role. Music from the media server and satellite set-top box can travel on command from an RTI remote or an AMX App on any iPad or iPhone to a combination of marine-grade Elan and JBL speakers and standard NuVo and Elac speakers in 12 independent audio zones.

The same remote and touchpanel can be used to direct video to any of 18 flat-panel TVs on board, including the 110-inch retractable Stewart Filmscreen screen in the home theatre and waterproof 37in TV on the fly bridge.

During the day, the lighting system takes a break, but when the sun sets, it springs into high gear again, setting the stage for an evening at the movies or the dancing under the stars.

A Movie scene – engaged from a 10in AMX touchpanel positioned between two custom-made motorised leather seats – handles the lighting in the home theatre. Commands from this touchpanel also signal the screen to lower from a soffit on the ceiling and the Runco LED video projector to fire up.

Then, it’s just a matter of touching an icon on the touchpanel to choose a movie on the media server, Blu-ray disc player, or satellite set-top box. A larger 19in version of this AMX touchpanel resides in the main salon, where the owner can govern every high-tech system on the yacht.

If the owner and his guests would rather spend their evening outside, the fly bridge can be transformed into a disco at the touch of a button on a nearby Lutron keypad. In a well-choreographed sequence, the overhead LEDs dim and colored DMX lighting activates.

Music pipes into the area through six built-in JBL Marine speakers and two subwoofers. The owners can alter the intensity and colour of the lights, sift through a playlist of music and crank the volume as easily as tapping a button on an iPad. When the party’s over, the fly bridge goes back to its normal appearance and lights lead guest back safely to their comfy and cutting-edge cabins.

After a day enjoying the sun and sea and an evening of entertainment on this luxurious high-tech yacht, the Lutron system sets the mood for a restful night’s sleep by closing the drapes and gradually dimming the lights.

This article originally appeared on CE Pro and was written by Lisa Montgomery.