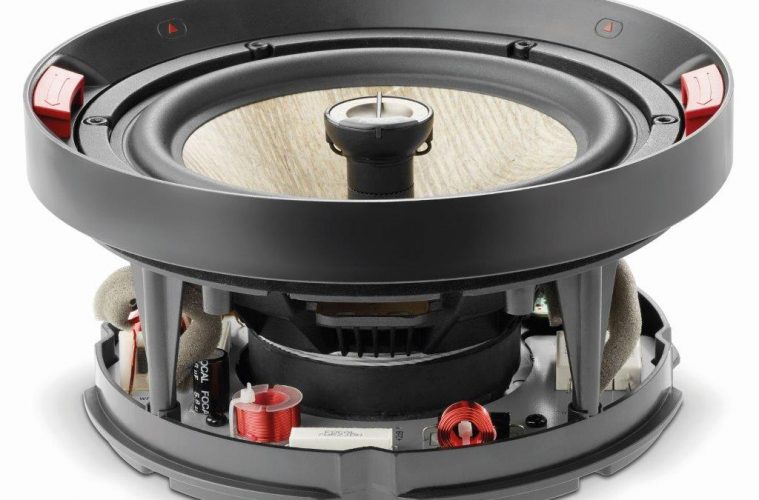 This review first appeared in sister title Essential Install, keep an eye out for more reviews, each month.

Focal might not be a brand that immediately springs to mind when you consider install speakers.

Yet the company has now brought much of its well-regarded residential and automotive loudspeaker tech to the in-wall and in-ceiling market.

The Flax cone was first rolled out on Focal’s Aria series domestic loudspeakers and subsequently to many of the brand’s premium automotive designs to much acclaim.

The natural fibres are eco-friendlier than plastics and polymers and said to result in a very light, rigid cone with good natural damping. Grilles off, the cone’s distinctive texture and colour certainly look the part too.

The premium feel runs throughout the flagship ICW 8 model on test. Fitted with an 8in Flax driver, the coaxially mounted tweeter can be angled by up to 20° from perpendicular and rotates 360°.

There is a +3dB / 0dB / -3dB switch for trimming HF output on the rear of the driver assembly.

The 300 ICW8 has a unique, tool-free fitting system that splits the speaker from a mounting frame. The latter has four large, sprung loaded and locking ABS clamps.

These accommodate mounting on substrates from 9mm plasterboard up to more than the 26mm MDF baffle of our test wall. Once installed, the clamps act as four-point bayonet fitting for the driver, which simply pushes in and quarter turns to lock into place.

It is a very neat and very effective mounting system.

It’s much quicker to install and remove than the traditional screw-turn lugs and the wide-bodied clamps are potentially less damaging to fragile substrates.

Once installed the clamps are no wider than lugs so should not cause issues fitting fire hoods.

Better still, removing and replacing the speaker assembly takes a couple of seconds, affording easy access to the HF trim switch to tune the system.

The 300 ICW 8 requires at least 13cm behind the mounting surface.

The sprung terminals are recessed into the rear panel, so the mounting depth will also need to accommodate the thickness of the speaker cable.

With a mounting depth for clearance approaching 14cm then, the ICW 8 is on the deep side for an 8in install speaker.

All models in the range are supplied with two magnetic, frameless grilles, one circular and one square, and a clear magnetic paint shield.

The grilles are nicely made, well finished in white and incorporate a removable cloth screen if you want to see the Flax driver and metallic tweeter through the mesh.

The frame sports 12 strong magnets and no amount of thumping the wall or 100dB+ SPLs were going to shift the grilles once installed.

In the box the first piece of information you are greeted with is a white circular card, printed with instructions on how to use the locking clamps.

Also printed on the card is a QR code. One might assume (well, one did assume…) that the card is the cut-out template and the QR code takes you to further mounting instructions.

Sadly, the QR code takes you to a dead link for the domestic Aria 900 loudspeakers and the circular card is just for information.

It’s not the template. An innocuous beige template card is packed deep in the box and is 15mm larger diameter than the instruction card.

That of course lead to cutting the mounting holes twice. Incorporating a circular ‘information’ card that is not the template frankly beggars’ belief and I expect I am not the first installer to make that error.

Thankfully, once the cut-out holes had been enlarged to the real template size, fitting the 300 ICW 8 is unrivalled in its speed and simplicity.

The clamping system is robust and being able to pop out the speaker in seconds will save plenty of time during snagging and fine tuning.

This speaker produced one of the flattest 30 degree off-axis responses I have measured from a large, coaxial install speaker.

The on-axis measurement (graph one) shows a mild HF lift, but as the  listening position is almost certainly going to be off axis for some if not all of the listeners, the off-axis flat response is ideal.

If the tweeter pod points directly at the key listening position, setting the HF trim to -3dB will smooth out the response.

LF reaches down to around 50Hz (-6dB) in a typical sealed/infinite baffle install such as a ceiling with floor above.

While that will vary depending on the installation, such an extended LF response means you can keep the subwoofer crossover to 60Hz, reducing the sub’s perceived directionality.

A single unit comfortably hits 100dB SPL (@1m) with music without sounding strained, and both speakers on test survived a week of rock and hip-hop abuse without so much as a rattle.

Aside from a note about the mounting depth and gripe about the dubious ‘non-template’, Focal’s 300 ICW 8 is an exceptional premium installation speaker.

The clamping frame system is inspired, the speaker’s performance outstanding and its fit, finish and build quality is beyond reproach throughout.