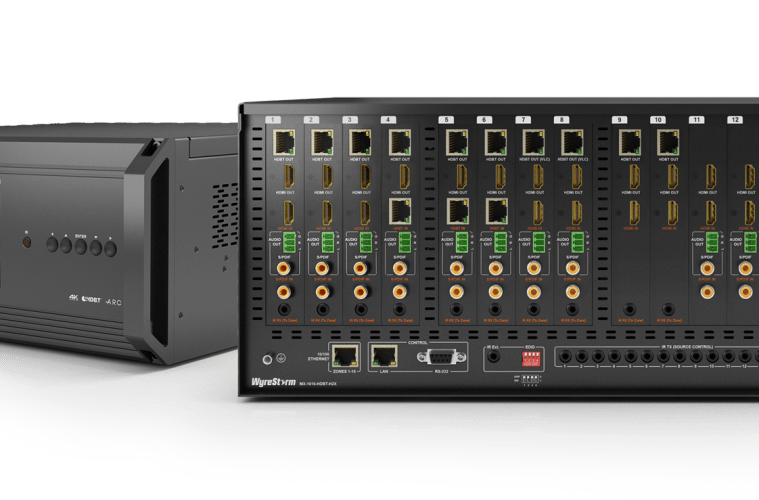 This maker always aims for a big splash at the show and this year looks set to be no different with several launches promised.

First up, an evolution of the H2X series, the H2XC which adds integrated audio DSP matrix switchers with a selection of customisable multi-format, multi-platform transmission cards.

WyreStorm says the H2XC was developed for large scale residential and commercial applications facilitating the distribution of multi-source 4K UHD with HDR and legacy video formats, as well as multi-source audio matrix switching to multiple zones, including SmartTV functions and audio-on-demand products.

As per its parent model, the H2XC Series includes WyreStorm’s own SmartEDID technology to remove conflicts when combining 1080p and 4K screens within the same installation.

Modular in nature, the H2XC features a choice of a 10 or 16-way H2X chassis populated by a custom selection of six multi-format transmission cards in any quality or combination as per customer specification. The H2XC features an integrated audio matrix with DSP capable of routing up to three separate audio signals per transmission card (depending on card model), including ARC, HDMI de-embed from video and separate line-level audio only sources.

Pick a card, any card…

Beginning with the TX-H2X-HDMI card offering 4K HDR with multiple audio options to 70m/230ft or 1080p to 140m/459ft 1080p.  Connectivity includes HDMI In, HDBaseT Class A and mirrored HDMI Out, S/PDIF Audio In, S/PDIF and Analog Stereo Audio Out and IR to zone for source control.  The TX-H2X-HDBT card offers the same connectivity, with the crucial exception of swapping the HDMI input for a Class A HDBaseT Input to support decentralised source connection.

Dedicated video and audio cards enable video and audio zone-expansion respectively to allow a dealer to skew the number of AV inputs and outputs to suit the project. The TX-H2X-VDZ offers HDBaseT In, HDBaseT and mirrored HDMI Out and IR to zone, while the TX-H2X-ADZ features HDMI In and Out alongside S/PDIF Audio In, S/PDIF and Analog Stereo Audio Out.

Both cards also feature include HDMI In, mirrored HDMI Out, S/PDIF Audio In, S/PDIF and Analog Stereo Audio Out and IR to zone.

Obviously the aim is to deliver a one-size fits all projects, where as before different chassis would need to have been deployed.

WyreStorm claims that as of right now, the H2XC is only multi-I/O audio visual matrix device available capable of delivering full-bandwidth 18Gbps HDMI content over both copper and optical transmission mediums whilst handling up to 48 discrete audio source devices to 16 DSP-managed audio zones.