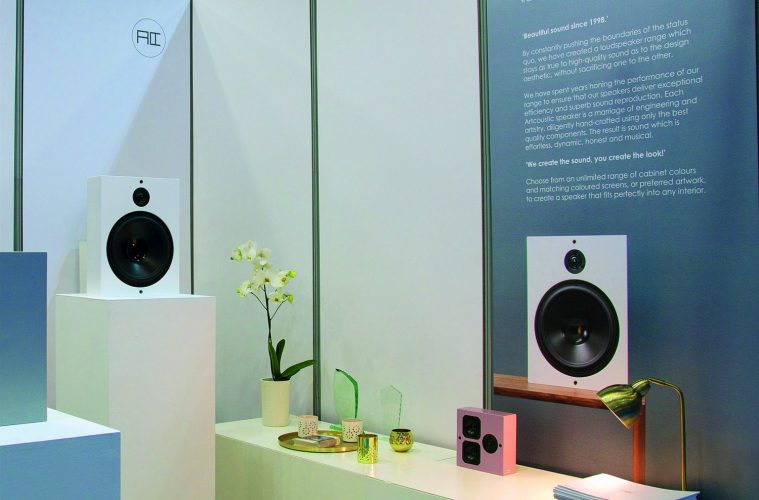 This year’s EI Live! show was packed full of fresh introductions and show exclusives; EI presents just a few of the many loudspeaker highlights from a top two days of install innovation.

Speaker wise, the show was chosen as the launchpad for Podspeakers, a reinvention of the curved family of speakers from Danish brand Scandyna. Now being distributed in the UK by Hi-Fi Cinema, Podspeakers are back to deliver some fun and high-quality sound options. Although the curved shapes will be familiar to many, what is inside has been redesigned.

Hi-Fi Cinema says the brand is suitable for retailers and installers, offering a series of options for two channel, multi-room and surround sound. It’s new product, Big Pods got a first showing in the UK. Underlining the brand’s aim to deliver quality sound, but a design statement too, the speakers’ curved enclosures not only look attractive, but reduce internal standing waves. In demo they are just one of those types of speakers that put a smile on your face; it almost feels like they are having fun too. There are passive or active versions, Bluetooth capability and further new options on the way.

There was more news on the speaker front as Anthony Gallo Acoustics was relaunched into the UK following a buyout by its UK distributor. Moving the brand’s HQ from California to Lanark in Scotland, the team were enthused to be able to be fully in control of this characterful brand. New additions have already been added to the company’s familiar spherical designs as RAL and Pantone colours are now available on the products’ increasing interior design options. Turnaround time for the bespoke colours is two weeks. The full range is now back in production and the company is also promising new product too.

There was more audio innovation from Redline, as this distributor was showing some style with its new printing service for speaker grilles. RAL/Pantone colours can all be accommodated, but this service goes a step further by offering high quality prints of any image the customer wants. So, if the client just wants the speaker to match their curtains – fine – but if they want an image of their kids playing football, they can have that as well. Looking at the examples on the stand, the images are absolutely pin sharp and offer real vibrancy.

There was a definite theme at the show this year: speakers that make a bold design statement are on the rise.

Another audio UK first on the Redline stand was the Artison Backpack P-5, a compact and cool running AV amp available Q2 of this year. The distributor says the unit is compatible with everything and is compact enough to offer lots of flexibility when installing. With no need for connection to a central rack, the unit can cut costs as well as get the job done. The machine uses copper heat sinks so it can cope with a wide variety of installation locations; the unit will also come with its own wall bracket and is network controllable via RS232.

Yet more new product was on show on the Karma AV stand. The distributor chose the show to launch the Emotiva brand into the UK, a US AV design specialist which manufacturers a range amplifiers, loudspeakers and subwoofers.

The distributor also wanted to highlight the innovation on offer from its own Ultimate Screens concept with a new screen masking version. This option still delivers the ease of installation that the brand has been built around, designed to offer a one-man risk free installation, but adds masking options with some interesting features of its own. Driven by a Future Automation switcher box, the screen can cope with any format needed, but has built-in safety features which means wandering hands cannot be injured in the mechanism and the mechanism won’t be damaged by interference. The company is keen to underline that the product has been designed using direct experience in the field to deliver an installer friendly solution.

Naturally, there was more audio on the Amina stand where the company’s new Amina Edge was put through its paces – another UK show first. This new series has put the brand at a different level in terms of audio quality; yes it has all the benefits of a hidden speaker, but it’s also just a damn good speaker. The show gave installers a key opportunity to discover that for themselves.

“We had four brand new products to launch at the show and whilst we were very confident in them, the opportunity to show them directly, in front of the whole industry is a vital test for us. The reaction was amazing, better than we’d even hoped for, with the diminutive Target Mini being a real highlight. Dealers immediately loved them, they sounded great and look really cool. We were delighted with the reaction and congratulate everyone on a fantastic EI Live!”

The Target Mini measures just 15cmsq and 5sm deep, but packs a punch in its attractive enclosure. Black and white are available as standard, but the company can produce the product in any colour as long as it has the paint code to match. Also new, the Performance PS2 front horn-loaded and vented sub, a powerful versatile sub which can be built into cabinetry.

The CPH10 is a new full range speaker which boasts a 10in driver partnered with a tweeter designed to offer an option when bass is required, but a sub is not a practical option, the unit can go all the way down to 38hrtz. Finally, the new top of the range line array model, the SL24-12 TAAA. Line Array speakers can sometimes be affected by phase issues, however this product looks to solve those by creating a time aligned performance curve by recessing some of the speakers into the cabinet. The idea is that all of the sound reaches the listener at the same time. Word from those who have heard it in full cry, is that this is one of the best performing speakers Artcoustic has made.

Also on show was the updated SB Soundbar Series, which includes the SB-4 model, an audio solution for 70in plus screens. The manufacturer was also highlighting the new IV140 invisible speaker designed to deliver ‘best in class’ audio performance for hidden in-wall and in-ceiling applications.

The Climate range, featuring three two-way satellites and one single stereo weatherproof speaker, was also on stand. Visitors also had the chance to familiarise themselves with the four in-wall/ceiling speakers that make up the All-Weather In-Ceiling Series and the new CLG160 satellite from the Climate Garden System.

CAVD used to the show to launch its new brand, Audio Excellence – the audio department of Screen Excellence Ltd.

Jamie also revealed that CAVD is also about to unveil its new demonstration facility in Marlow featuring an Audio Excellence Dolby Atmos speaker system in the cinema showroom to introduce the sound and ‘Congard Code’ to dealers.