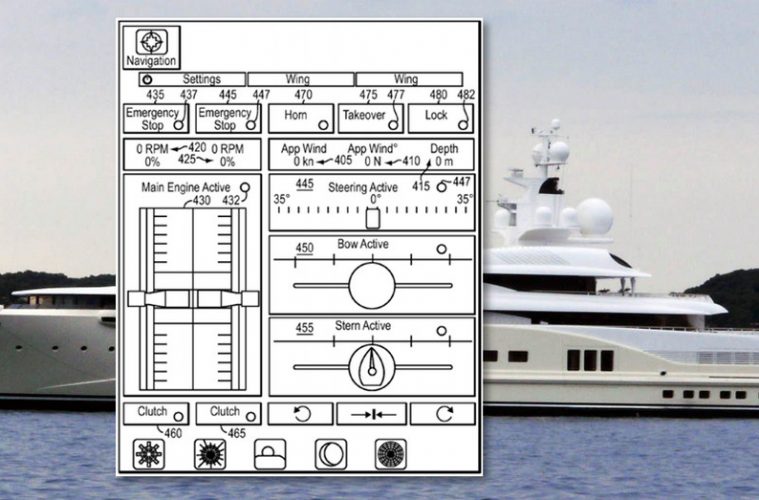 Savant Systems and Apple have patented a wireless solution for remote-controlling a vehicle – specifically marine vessels such as yachts.

Apple founder Steve Jobs and Savant founder Robert Madonna – amongst others – are named in the patent, the first iteration of which was filed in March 2013. A subsequent version was filed in 2014 and the utility patent was granted this week for a ‘Remote motion control using a wireless mobile device’.

The patent describes little more than a generic smart phone or tablet communicating over a wireless network to a server that issues commands to control the mechanics of a boat:

In one embodiment, a general-purpose wireless mobile device having a touch-sensitive screen and executing a remote control application is used to remotely control a vehicle (e.g., a marine vessel). The general-purpose wireless mobile device communicates via a wireless network with an interface (e.g., a server) that is coupled to an electronic control system of the vehicle (e.g., the vessel). In operation, environmental information and/or system status information is collected through the electronic control system, propagated to the interface (e.g., server), and then sent over the wireless network to the wireless mobile device. Similarly, control input is sent over the wireless network to the interface (e.g., server), which passes the information to the electronic control system, which in turn issues appropriate control signals to the vehicle subsystems (e.g., marine subsystems) to control the motion of the vehicle (e.g., the vessel).

The invention includes a component for monitoring the health of the network to ensure packets get through to the vessel-control system, with feedback returning to the mobile device.

As described in the patent, crew members on large marine vessels often have to run back and forth or use walkie talkies to message each other from helms to control rooms. Often the information gets lost in translation, and you never quite know if the required action was taken.

Even for vessels that have some kind of remote-control operation over dedicated wireless frequencies, they require dedicated devices for control – devices that crew members tend not to carry around the boat.

During the potentially long stretches of time between their use, dedicated wireless remote controller may be set aside, to be forgotten about or lost. An operator generally has little reason to carry them about on their person, due to their infrequent use. Accordingly, when an opportunity for their use does arise, they are typically not at hand, and an operator may need to search about the vessel to locate the dedicated wireless remote controller, before it can even be used.

There’s all kinds of other problems with the archaic way of operating vessels.

Wouldn’t it be better if the boat’s controls could be operated remotely via an App, with two-way feedback provided from the central controller?

That’s the gist of the patent.

A variety of types of vehicles have some sort of main control interface through which an operator can monitor and control the vehicle. Typically, the main control interface is coupled via a wired connection to lower level systems. For example, in modern marine vessels (e.g., yachts), a main helm station is generally provided through which an operator (e.g., the captain) may monitor and control the vessel. The main helm station typically is coupled via a wired connection to an electronic control system of the vessel, which is in turn coupled to various sensors and marine subsystems onboard the vessel.

Environmental information and system status information may be collected by sensors, under the direction of the electronic control system, and passed back over the wired connection for displayed upon the main helm station. Control input entered by the operator on the main helm station may be passed over the wired connection to the electronic control system, which issues control signals to the marine subsystems to control motion, and potentially other functions, of the vessel.

In a typical arrangement, the main helm station is centrally located, often on the main level of the vessel. While visibility from such a location may be adequate in most situations, in some situations it may be insufficient. For example, if the vessel is maneuvering in port to moor or dock, an operator at the main helm station may not have adequate line of sight to judge the position of the vessel with respect to the edge of the dock or mooring.

The crew member may misspeak, or the operator may mishear a crucial piece of information. Further, the crew member may lack the experience of the operator, and this lack of experience may cause them to misestimate distances or suggest incorrect course corrections. Still further, there is an inherent delay to this sort of relay of information, and this delay may be problematic in some situations.

This may create a potential for catastrophic failure, for example, where an operator believes that control input they have entered will be acted upon, only to find that it is not. Further, dedicated wireless remote controllers typically do not provide sufficient environmental and system status information to permit more advanced types of control.

Accordingly, there is a need for improved techniques for remote motion control of a vehicle (e.g., a marine vessel), that may address some, or all, of these shortcomings.