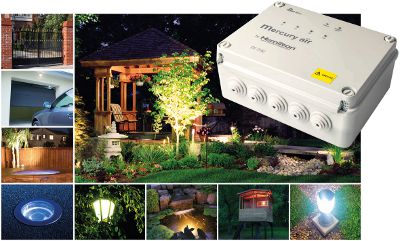 Thanks to the company’s focus on making the switching system as rugged as possible, the Mercury Air Wireless Switching System features a water resistance rating of IP56.

The latest product in the Mercury range also doesn’t require being mounted to the wall, instead users can choose to have it fitted virtually anywhere in or outside their house, as long as it can be securely fixed.

While the waterproofing is a unique feature, Hamilton claims that it’s also one of the only products on the market of its kind to include both an ‘on/off’ and ‘timed’ operating mode.

Hamilton is hoping to take advantage of the impending arrival of the 2015 gardening season and is the company’s first of several new weatherproof accessories that it plans on introducing.

The Mercury Air Wireless Switching System features four circuits each rated at 1.25KW and has an operating range of 250m.