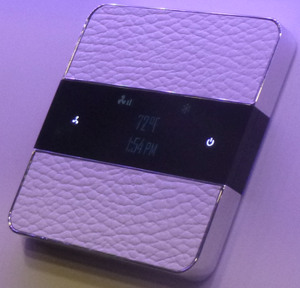 Based in Belgium, Basalte’s Sentido touchpads are popular in Europe because they incorporate KNX, Europe’s prevailing home- and building-automation standard.

As such, they can control scores of KNX-compatible products including lights, temperature and motorized shades, and they can do this through several multi-touch points on their controllers, including the side bezels.

In the US, KNX is barely getting started, so it’s good to know that Sentido now integrates with Lutron HomeWorks QS and Crestron via serial communications, meaning the elegant touchpads can be used to control lighting and temperature for both of these systems.

At CEDIA Expo 2015, Basalte gave us a look at its new thermostat-control feature, including the operation of HVAC fans.

Two-way feedback is available through a digital read-out on some Sentido models.

Crestron and Lutron HomeWorks QS both have nice touchpads of their own, but Basalte’s are something to behold.

The manufacturer is now represented in the U.S. by several independent reps and we expect more integrations to come.