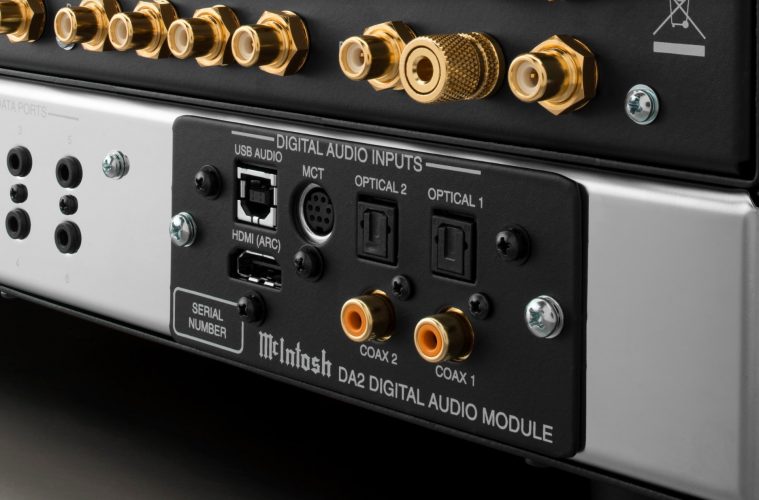 McIntosh has announced the DA2 Digital Audio Module Upgrade Kit (£1,295) – the manufacturer’s most advanced device for processing high-resolution digital audio; products equipped with the original DA1 module can be upgraded to the newer DA2 via dealers, keeping them fully up to date in the fast-moving world of digital audio.

The DA2 offers an expanded set of capabilities including a new audio-only HDMI Audio Return Channel (ARC), enabling a huge upgrade in (compatible) TV sound quality when listening through a connected home stereo system. ARC functionality provides two-way communication between the DA2-equipped McIntosh unit and the TV, allowing for volume control and lip-syncing functions, too.

Popular multichannel audio formats from Dolby and DTS are also supported and will be expertly converted to two-channel audio for proper playback through any DA2-equipped unit. When CEC (Consumer Electronics Control) communication is enabled in both the DA2-equipped unit and TV, the TV remote can control the power and volume of the connected McIntosh unit.

Additionally, the DA2’s USB input can support native playback of up to DSD512 (plus DXD up to 384kHz), surpassing the DSD256 limit of the DA1. The increased DSD playback support is thanks to the next-generation, Quad Balanced, eight-channel, 32-bit digital-to-analogue converter (DAC) that drives the DA2. The audiophile-grade DAC offers both an improved dynamic range and lower total harmonic distortion compared to the DA1.

The DA2 offers the same connections as the DA1 (two coaxial, two optical, one USB and one proprietary MCT). The coaxial and optical inputs can decode digital music up to 24-bit/192kHz for high resolution audio playback and the proprietary MCT input offers a secure, custom DSD connection for playback of high-definition audio found on SACDs when paired with McIntosh’s MCT series of SACD/CD transports.

The McIntosh models that can be upgraded include: MA9000 (pictured below), MA8900, MA7200 and MA5300 integrated amplifiers, MAC7200 receiver and C49 preamplifier (these models will continue to come with the DA1 installed). Upgrading to the DA2 is an optional dealer-installed upgrade that must be performed by an Authorised McIntosh Dealer or Authorised McIntosh Service Agency.