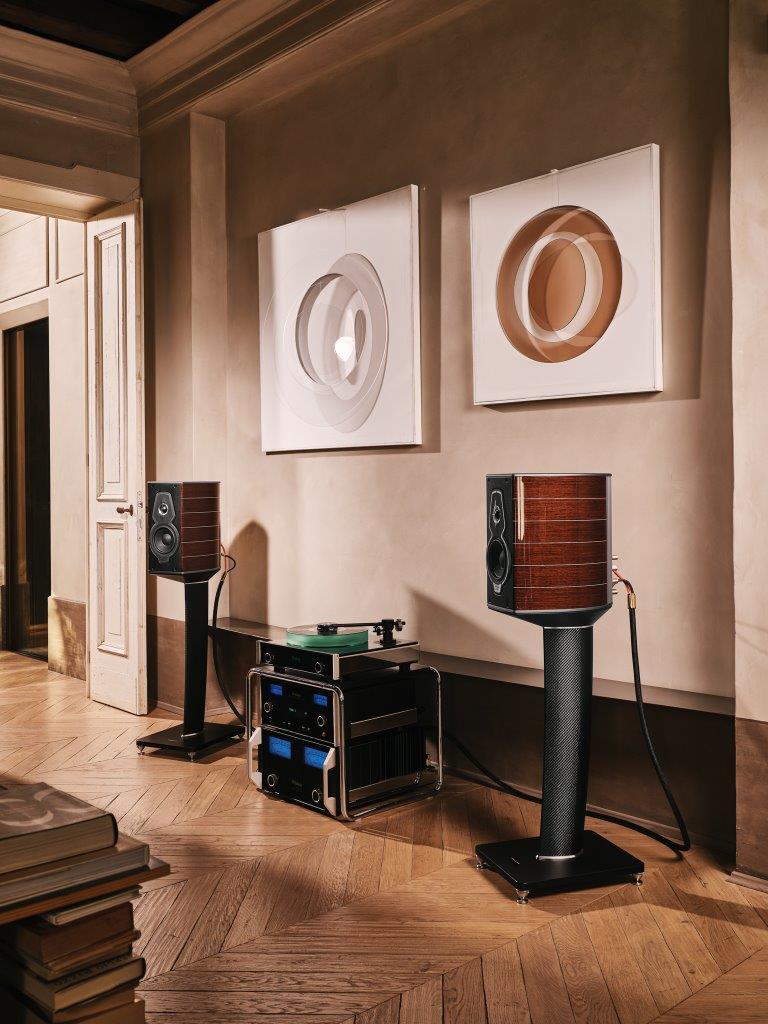 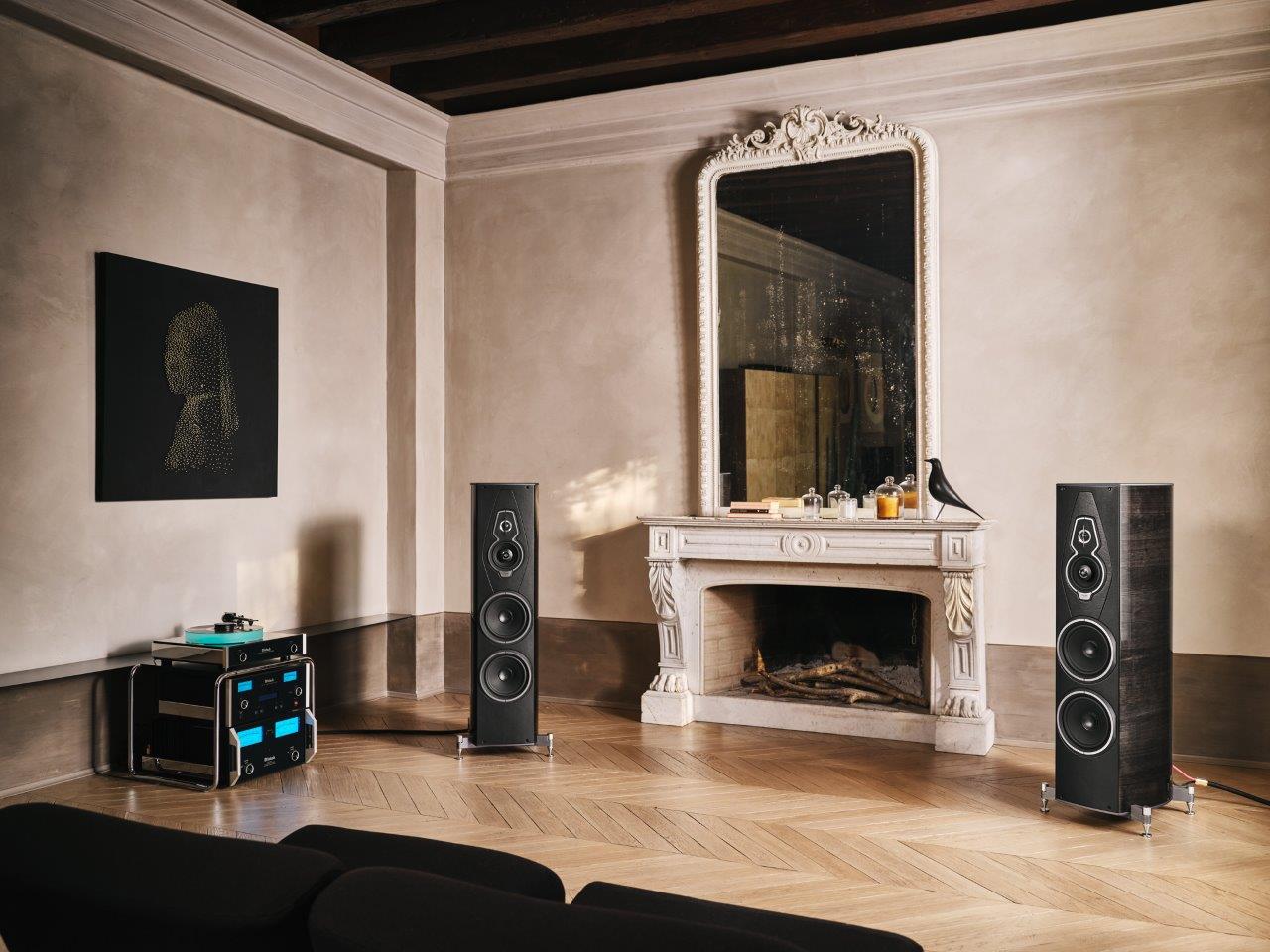 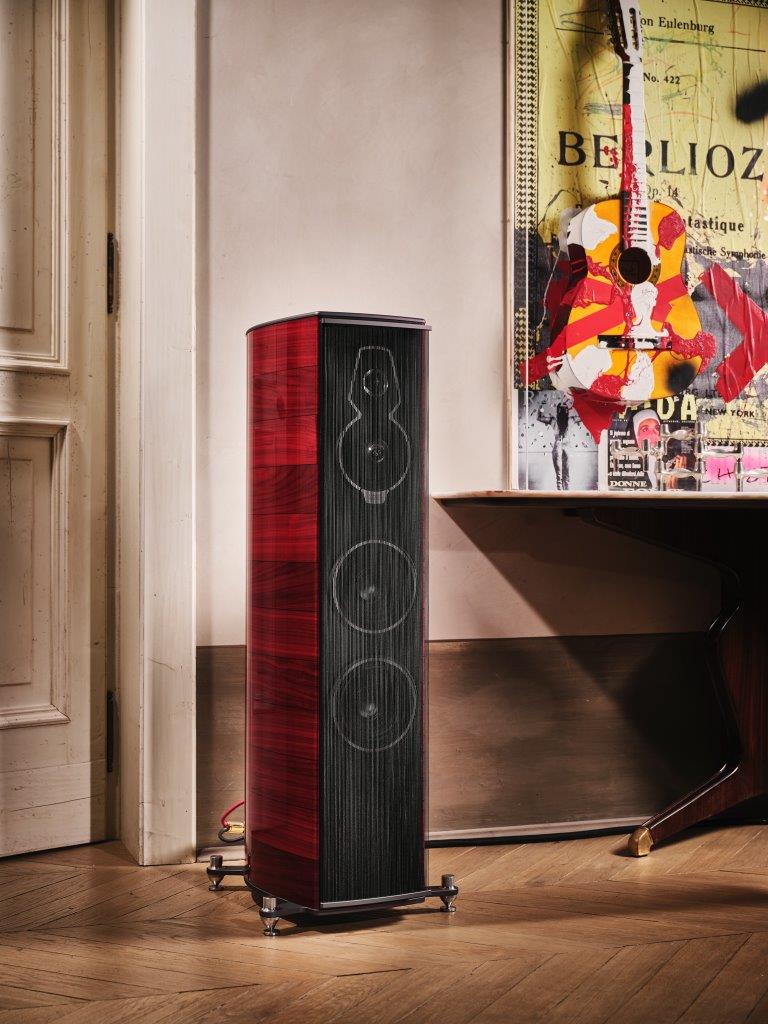 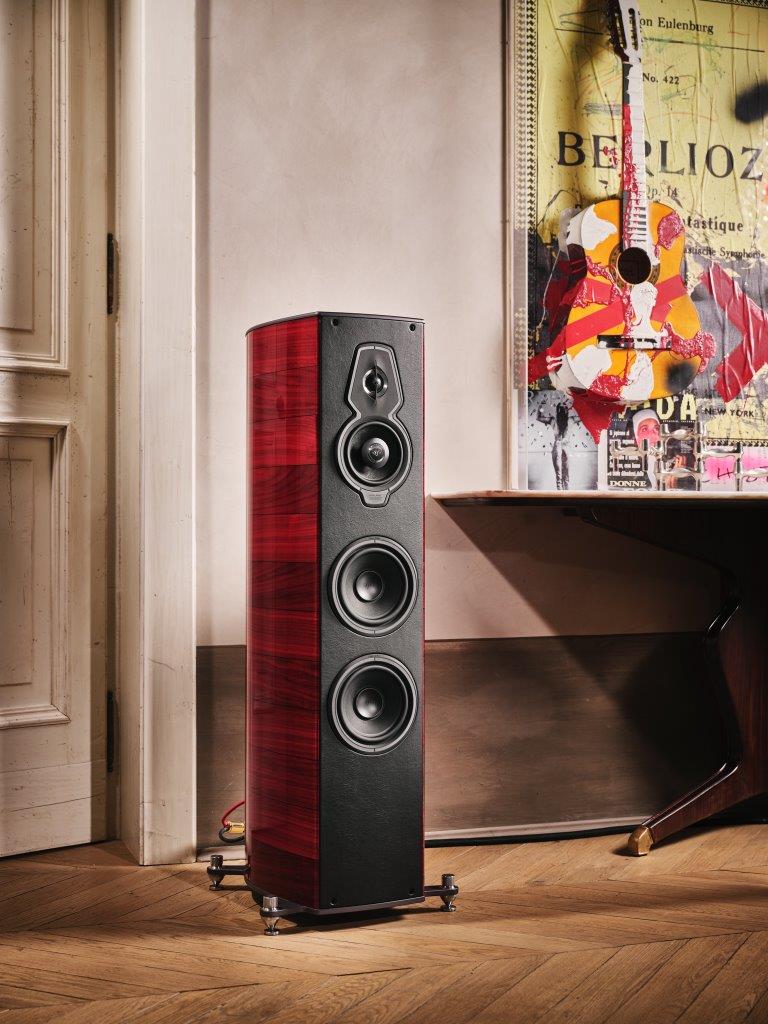 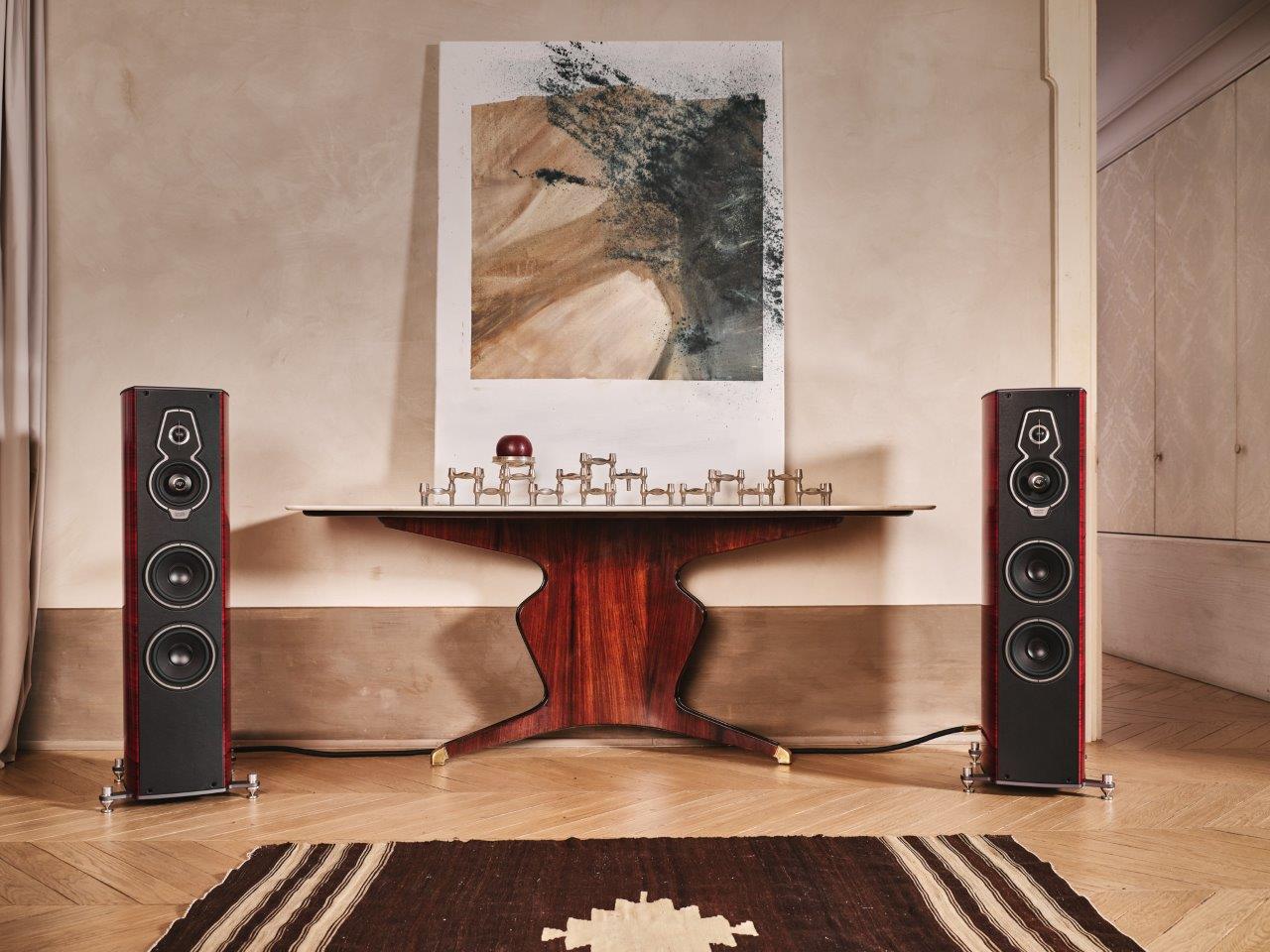 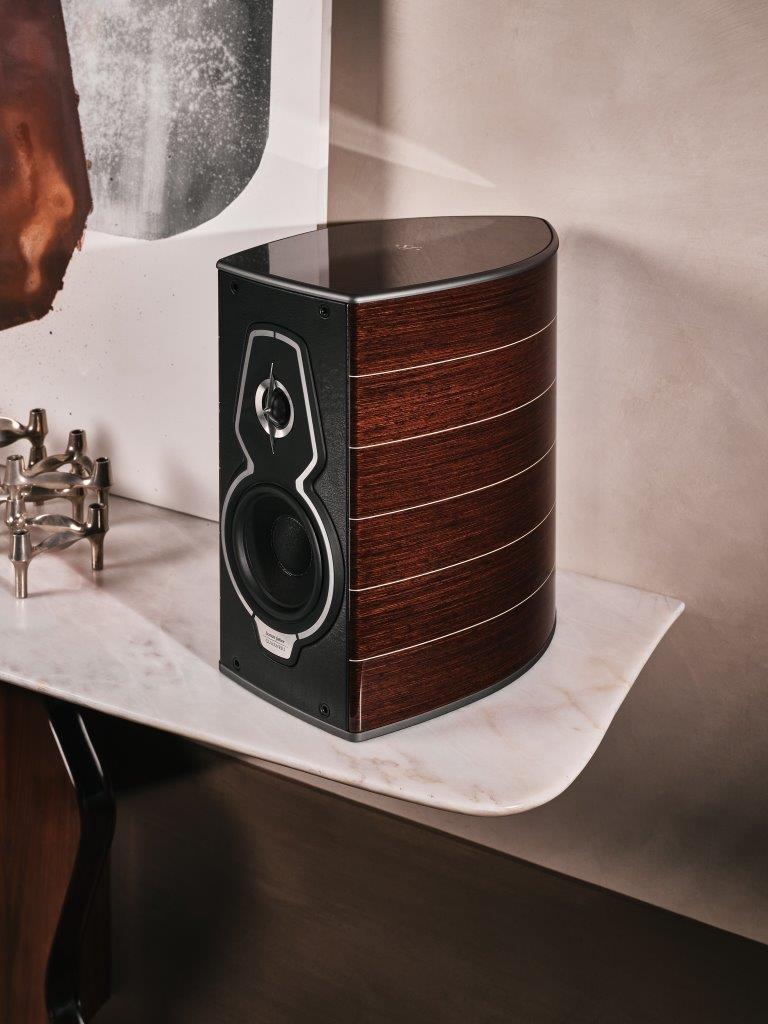 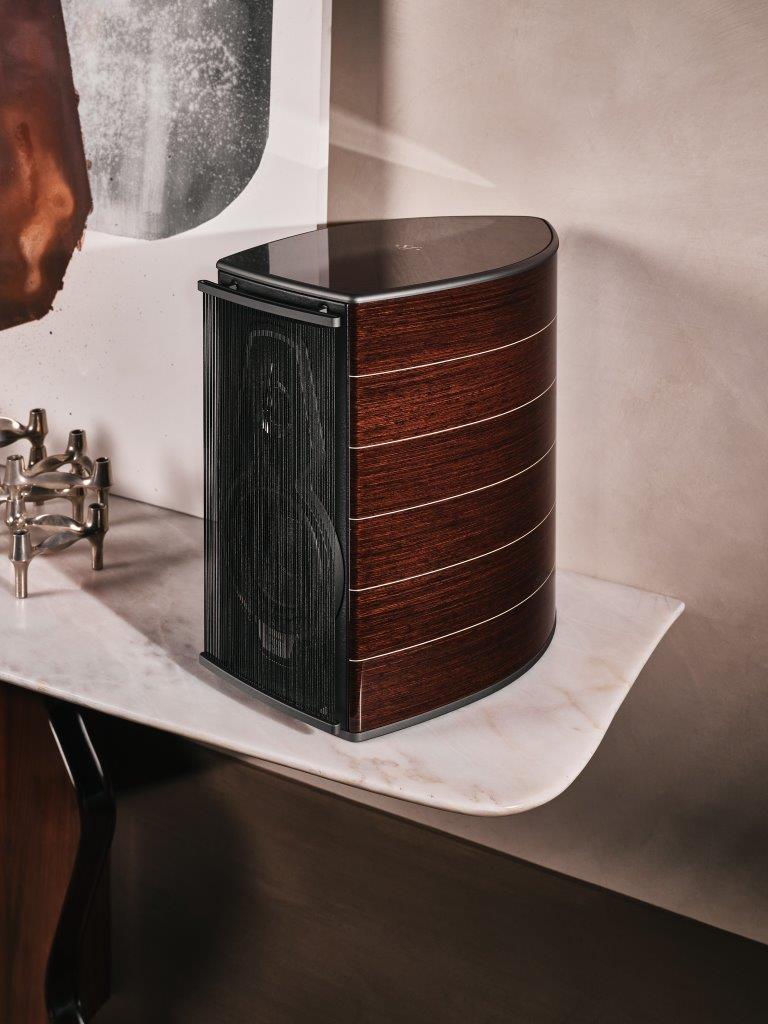 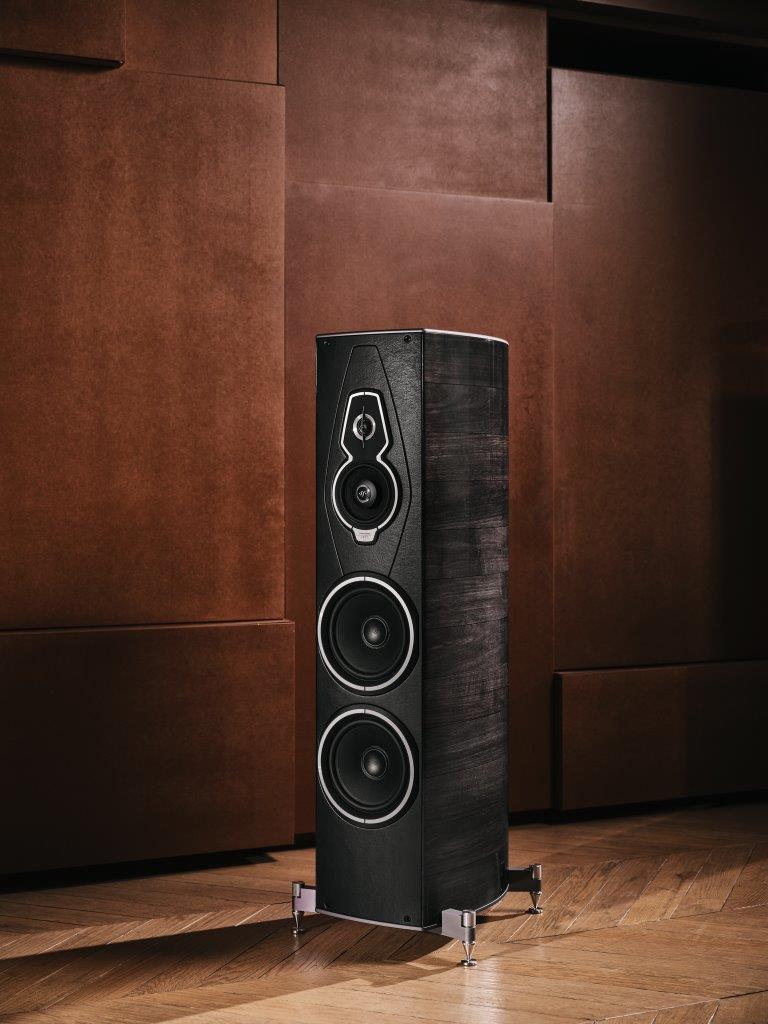 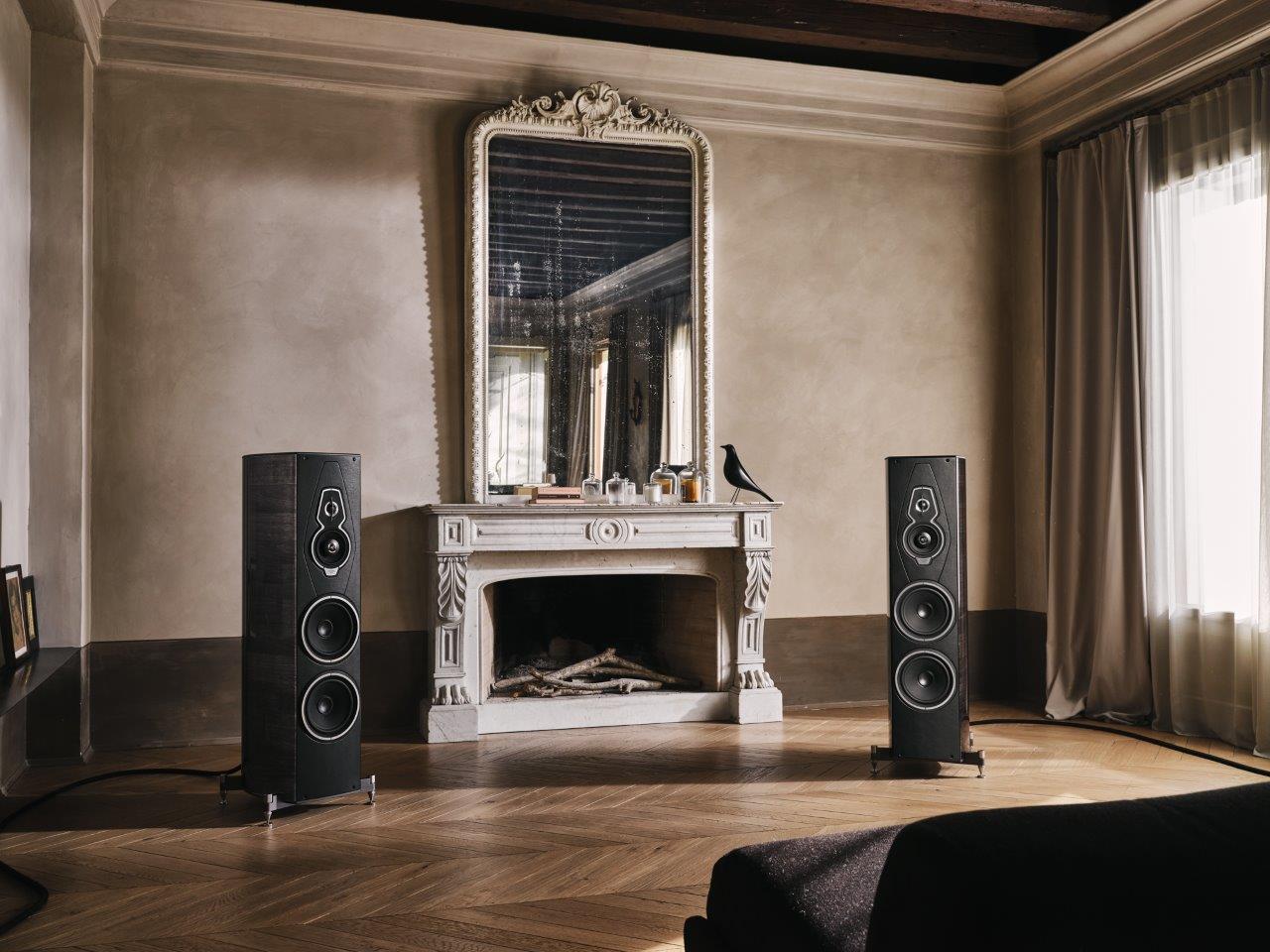 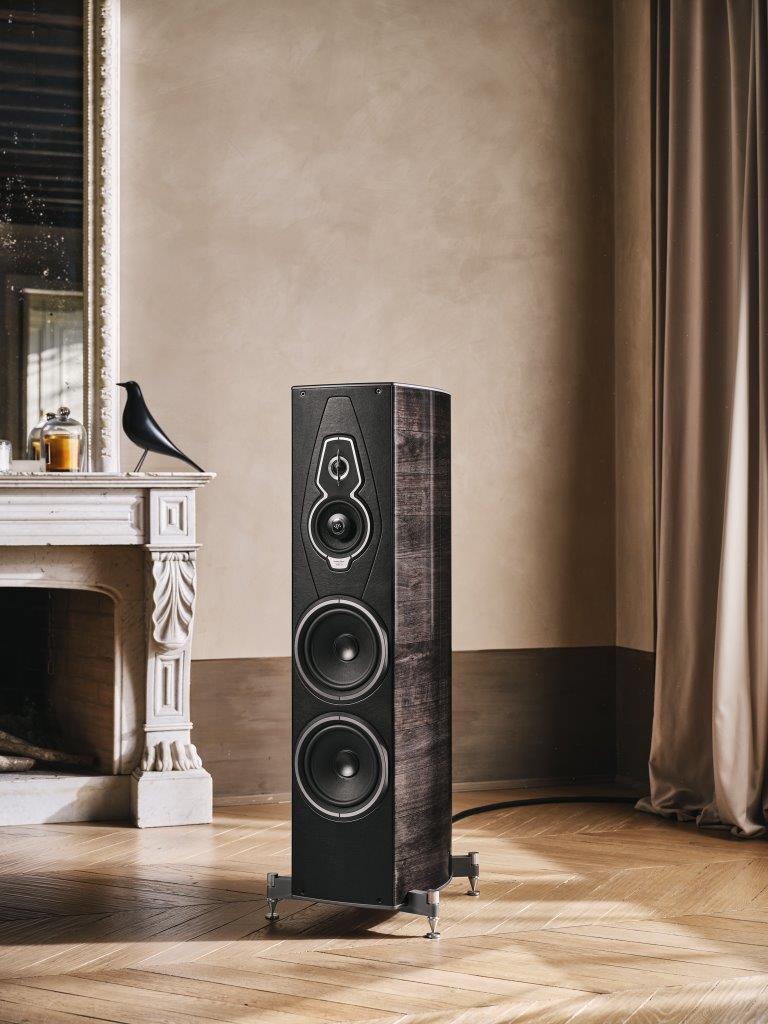 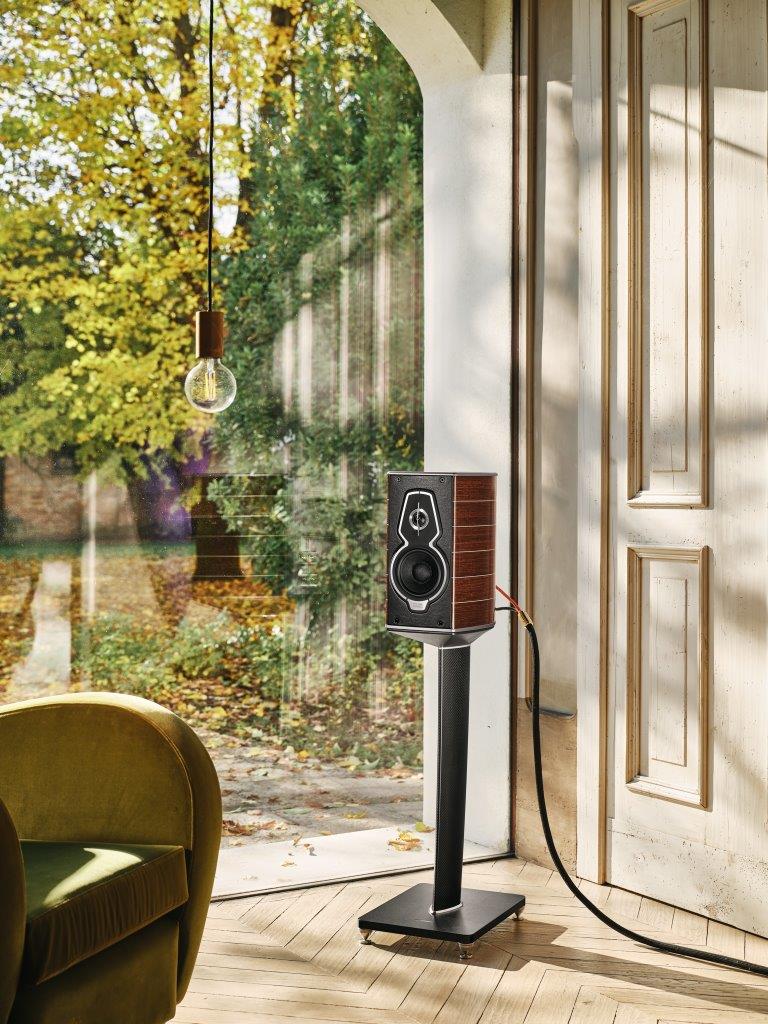 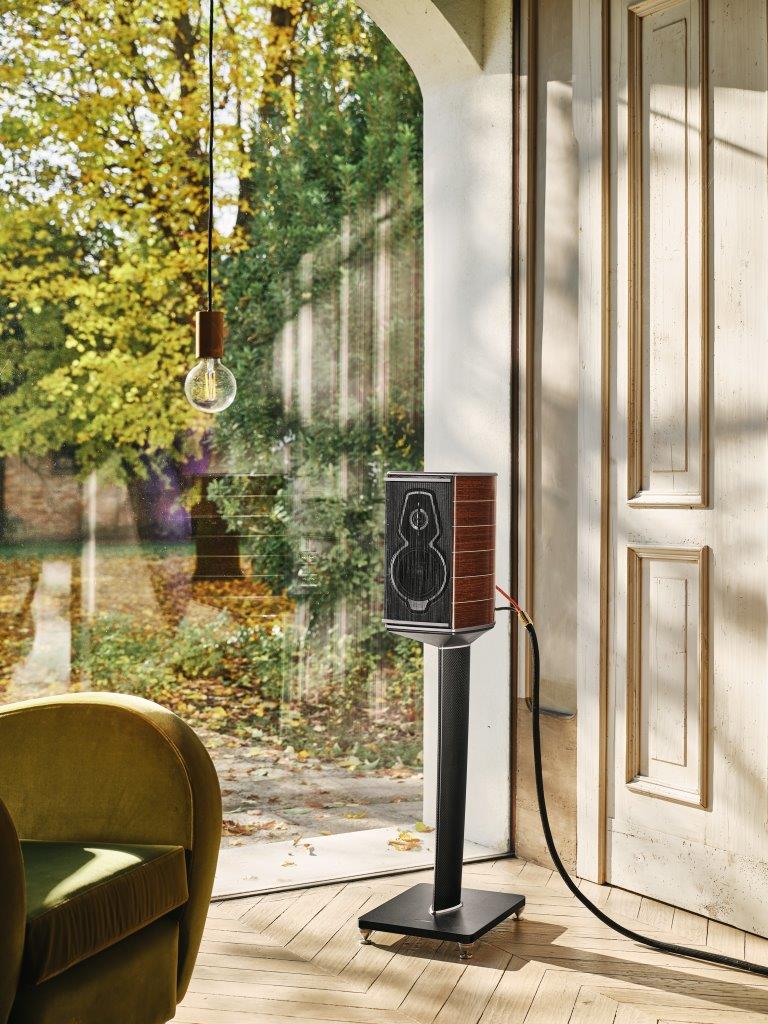 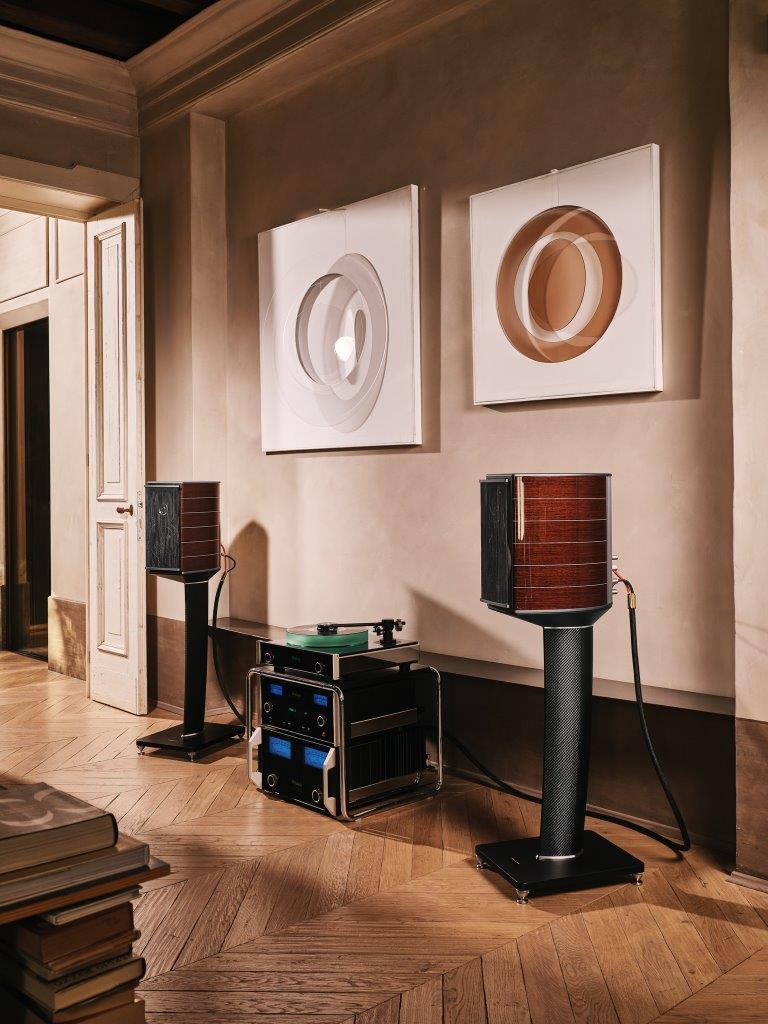 The extension of the current range progresses Sonus faber’s much-loved Italian-made Homage collection, which debuted with the Guarneri (in 1993), and pays tribute to the musical instruments that inspired the collection’s creation. The range honours the genius of the talented creators of musical instruments and the lute-making tradition with its roots in Cremona, Italy.

The company reports that the latest computer simulation and testing equipment has improved the cabinets, which now feature class-leading technology, helped by Sonus faber’s 2021 acquisition of the De Santi woodworking facility, its previous supplier of 35 years.

Improvements have also been made to the bracing and porting system, which allow greater efficiency and output while maintaining resonance control. The midrange and tweeter chambers have also seen radical change.

Homage retains the classic iteration of the lute shape, first introduced in the previous Homage Tradition collection, but with modified metalwork including smooth, rounded edges, with a graphite grey anodised finish.

Intono is a proprietary Sonus faber technology that addresses the drawbacks of ported cabinet and sealed enclosure designs yet plays to their strengths, says the speakers’ creator.

Intono uses a midrange driver ducted into a further sealed enclosure which is tuned just above peak pressure frequency. When the port unloads, or goes below its tuning frequency, the pressure is equalised into the alternate chamber, significantly reducing impedance peaks. The Intono system cleverly offers the benefits of ported and sealed-enclosure designs, in a more efficient system. Intono is available in the Amati G5 and Sefafino G2.

The Amati and Serafino models benefit from a new, more efficient 150 mm natural fibre midrange driver with a neodymium magnet, plus a new shorter and wider voice coil for greater control, a faster response and more overall force. The suspension has been improved, too, with optimisation for greater speed and control.

The Serafino’s bass driver has been updated with a new coil and spider material, optimised for greater air movement and bass extension. The entire system has also been mass-loaded to counterbalance any resonant vibration.

Amati benefits from a new 220 mm bass driver with a 23.6 % increase in force. Two separate ultralight CCAW voice coils are implemented in a custom-formed neodymium Slug featuring two air gaps for maximum speed, with an integrated heat sink for improved power handling; the Finite Element Method was deployed to give the Amati unrivalled bass performance in its category.

Tuning of the Guarneri’s 150 mm driver has led to improvements in control and has tamed resonance right down to 15 Hz. A purpose built neodymium motor system combined with a new tuning frequency, allow for deeper extension without distortion. The entire system has also been optimised, balancing mass to reduce modal vibration.

The new Homage drive units are time-aligned, and phase correct on every single driver. This phase coherent driver array not only means greater impact, but considerably better three-dimensional effect for a more immersive sound.

In addition, aluminium ‘dampshelves’ at the top of the cabinet, increase rigidity and reduce resonance, while the proprietary UltraFlex anti-resonance porting system maximises airflow.

Commenting on the new-generation Homage models, Sonus faber’s Chief of Design, Livio Cucuzza says, “The most complex, but also exciting moment for a designer is when he is called upon to improve a timeless icon.

“How do you innovate a product whose image is immune to the passage of time and the changing fashion trends? The only way is to take a step back, reflect and deeply understand why that product was initially created. I faced this challenge straight on with my team at Sonus faber.”

The third generation of Homage was the first product I worked on, and the latest launch we are unveiling is the fifth: the most evolved, the most mature, but equally authentic and special. A story that repeats itself, crossing the evolutionary path in different stages of my own life, never ceasing to fascinate me and make me proud to be part of it.”