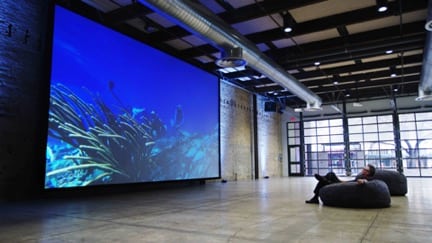 Screen Innovations has announced a brand-new solution for those wanting an ultra-large projection screen, whether it be for their home or commercial property. Debuting at InfoComm 2018, the new screen is available in sizes up to 15.8ft high and 164ft wide, and will be part of the Slate XL range.

Like other Screen Innovations products, the Slate XL uses the company’s proprietary ambient light rejecting (ALR) technology, which should make it suitable for just about any installation. While it’s perfect in large venues, the company says that homeowners that want to go big, like really big, can also get the screen installed.

“Many large venues and Worship facilities need to use large displays but most of these facilities either have large windows or bright lighting which creates a lot of ambient light that makes choosing a white or gray screen out of the question,” says Skyler Meek, director of marketing at SI.

“Most of them, however, can’t afford the massive cost associated with using a light-wall style system. At SI, we think our customers and consumers deserve a product that will give them those kind of results, but within a reasonable budget.”

Slate  XL is a 1.4 gain screen material that, counter to conventional wisdom, has a wider viewing cone than its lower gain counterparts. This makes it suitable even for large venue environments with wider dispersion seating arrangements.

The screen should also be suitable for most bright environments, as it’s capable of rejecting up to 65% of ambient light in the environment. That means users will have peace of mind that they’ll be able to view what’s being projected onto the screen, no matter the time of day.

Despite debuting at InfoComm 2018, where the company will be running a competition to win a free Solo, Screen Innovations has announced that the Slate XL is already shipping from its Austin, Texas factory.