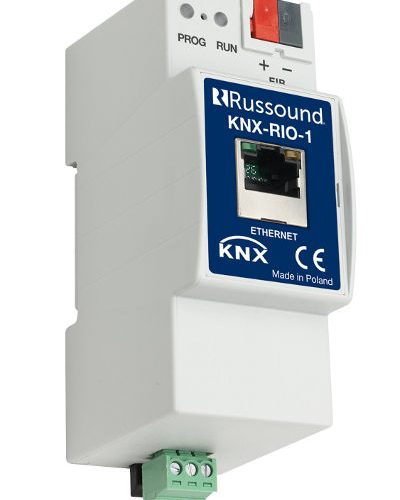 The Multi-Room Company, the exclusive distributor for Russound, will be making the product available to UK installers this year, with the goal of enabling integration of distributed audio of up to 16 zones throughout the house.

The KNX-RIO-1 is installed on 35mm DIN rails and is powered by the power supply for the DIN rail via standard KNX Bus connections.

Configuration can be done using the standard KNX ETS software program, which enables a number of control functions; including basic zone control and basic source control.

Support for metadata feedback for devices that display metadata will be baked into the KNX-RIO-1, meaning it should work well with Russound streamers and KNX keypads and panels.

Connected via its Ethernet connection to the home LAN, the KNX-RIO-1 gateway will allow installers to create a link between a KNX system and a network-connected Russound distributed audio system.

The aim of the KNX-RIO-1 is to deliver an ‘effortless, unified operation of up to a two-controller, 16-zone system using a single module’.

It has been specifically engineered for use with Russound’s MCA-series controllers; including the MCA-C3, C5, 66, 88 and 88X (as well as the XStream X5).

“The KNX standard and the RIO protocol confirm how interoperability can improve the work of our installation partners, and the enjoyment of their customers,” notes Mike Bonnette, product director at The Multi-Room Company.

“By creating a communications link between the two with the KNX-RIO-1, Russound has successfully integrated the best technologies available for seamless whole-house audio configuration and control.”

More from The Multi-Room Company