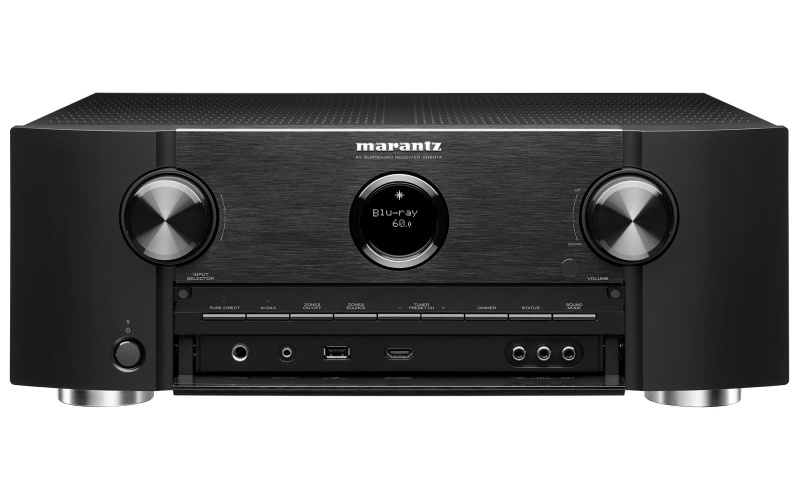 Marantz has officially debuted its 2019 mid-range AV receiver line-up, with the new SR5014 and SR6014 replacing last year’s models. What’s interesting about this launch, however, is the fact that it’s not the SR6014, the more expensive of the two models, getting inundated with new features; instead, it’s the SR5014 that benefits from a number of features that were missing from last year’s offering.

That’s why it’s so interesting to see these new models launch, as there’s now less of a distinct difference between the two. While the SR6014 is still the only model to support IMAX Enhanced, both feature Dolby Vision, eARC, HDR and HLG support right out of the gate, a huge win for those who would rather save the cash and get the SR5014.

Both the SR6014 and SR5014 boast new features that couldn’t be found on their predecessors, including HDMI Multiple Input Assign, which allows users to watch a video on screen but choose an audio input from a different source. There’s also the addition of Zone Stereo Mode, which with a single button push activates music playback in both the main zone and zone two. They’re hardly the most crucial upgrades, but for those who had considered the SR5013, the SR5014 represents far better value for money.

Of course, the SR6014 is still the more capable of the two. It offers 11.2 channel processing and pre-amplification outputs, and with an external stereo amp, installers are able to choose a variety of configurations – whether it’s 7.2.4 or 9.2.2. It also features Marantz’s high-current discrete power amplifiers and Hyper Dynamic Amplification Module circuitry. Meanwhile, the SR5014 is a 7.2 channel receiver rated for 100W per channel, which is just 10W less than the SR6014, but it does lack the aforementioned capabilities.

Marantz has always made its AVRs extremely flexible when it comes to what they can play and where they can route their sources, and the new mid-range models are no exception. Both models support high-res audio, while they can also link up with Denon’s HEOS multi-room platform for playback in any room within the house.

In terms of audio formats, you name it and the Marantz SR5014 and SR6014 will support it. Dolby Atmos and DTS:X are naturally here, while support for DTS Virtual:X and Dolby Atmos Height Virtualisation Technology are additionally supported; the latter of which will be made available through a software update.

There’s no shortage of features for better video playback either, including capability for 4K Ultra HD 60Hz pass-through with 4:4:4 Pure Colour sub-sampling. The previously mentioned support for Dolby Vision, HLG and HDR10 is also there, as well as the added benefit of HDMI 2.1 support and Auto Low Latency Mode, which is especially useful when gaming.

In terms of HDMI outputs, you’ll get three with the SR6014 and two with the SR5014, while there are eight HDMI inputs and a phono input for hooking up a turntable on both.

Pricing and release details for the UK and Europe have yet to be confirmed, although both models will be available in the US from mid-July, priced at $999 and $1,499, respectively.