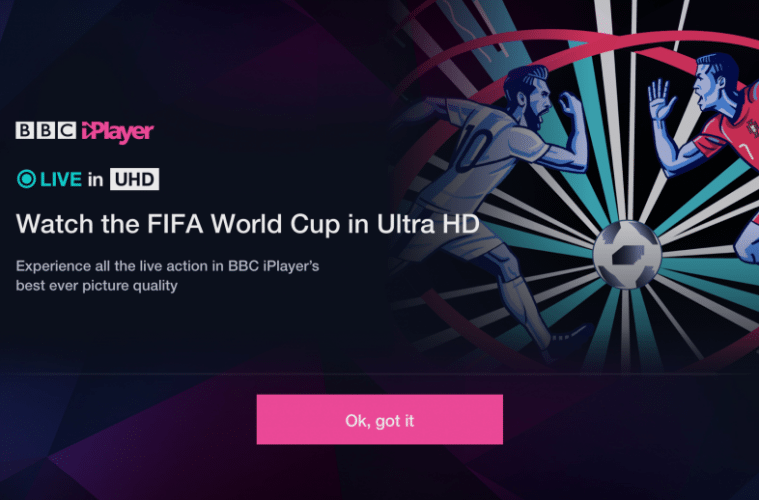 The BBC has confirmed that it will be making several World Cup matches available in 4K HDR, with the games set to be streamed live on BBC iPlayer. While this is not the first time the BBC has made 4K content available, it represents the first time the broadcaster has showcased a major sporting event in the format.

Despite making a select few matches available in 4K HDR, the BBC has confirmed that there will be a limited number of people allowed to watch them. In fact, those wishing to watch the match in the higher quality will have to hop onto iPlayer early, as entry to the stream will be available on a first-come first-served basis.

The BBC has yet to say exactly how many people will have access to each 4K stream, but has suggested that it will be in the ‘tens of thousands’. That means many users are likely to be left disappointed, as the World Cup typically spurs a sharp uptick in TV sales – many of which will be 4K models.

It’s unlikely that the BBC will be the only broadcaster to showcase matches in 4K, however. If it’s simply the bump in resolution that’s of interest, then both Sky and BT have a history of showcasing live sport in 4K. BT began broadcasting in the resolution back in 2015, while Sky began in 2016. Sky has yet to confirm whether its World Cup matches will be in 4K, but its German subsidiary will, so it’s likely that the broadcaster will do the same in the UK.

Unlike its competitors, the BBC won’t be limiting its streams to just 4K. That’s because the broadcaster has announced that it will be showcasing the content in a higher frame rate than the typical 25fps. In fact, the BBC’s 4K matches will be showcased in a smooth 50fps, which should give users greater immersion. Throw HDR into the mix, which promises more detailed colours and brighter imagery, then this could be the best way to watch 2018’s World Cup.

As expected, the BBC will be utilising its hybrid-log gamma (HLG) technology, which was an HDR format specifically designed for broadcast television. A detailed explanation on how HLG is different from other HDR formats is available from our sister publication, Essential Install Magazine.

While all 29 of BBC One’s World Cup matches are scheduled to be made available in 4K HDR, those who manage to nab one of the coveted spaces will have to have a pretty robust broadband service. That’s because the BBC is recommending an internet speed of 40Mbps, which is just enough for the UK’s average household, according to the most recent statistics from Ofcom.

Those with a 40Mbps+ internet speed may also try out the BBC’s other trial during the 2018 World Cup, which will be all to do with virtual reality. 33 matches will be available via a dedicated app, allowing users to adorn headsets and watch the beautiful game. It will be available on both iOS and Android smartphones, as well as on the Gear VR, Oculus Go and Playstation VR. Unfortunately, those with an HTC Vive or Oculus Rift, will likely be left without.

In VR, users will be able to choose their viewpoint of the game, with it offering a view from a luxury private box or from behind either of the two goals. So, for those who miss out on the 4K HDR streams, this could be the next best way to immerse yourselves in World Cup fever.