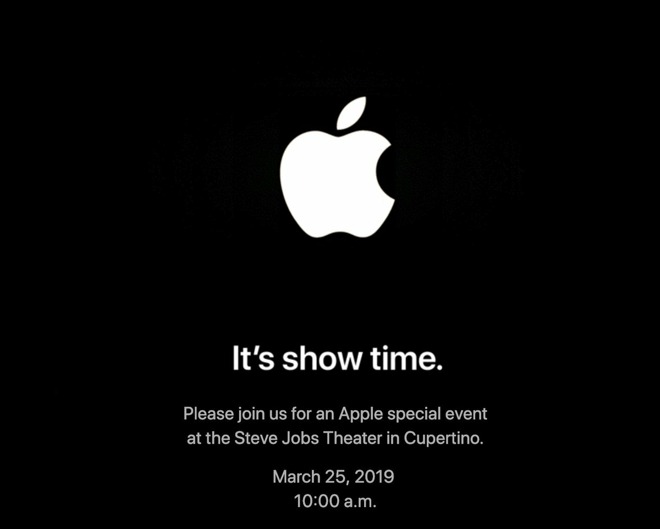 Apple has officially confirmed that it will be holding an event on March 25 and all signs point to a brand-new streaming service. While Apple wouldn’t comment on exact details surrounding the event, the invite used the ‘it’s show time’ tagline; a tagline it had used before to announce the original Apple TV.

Rumours surrounding Apple’s Netflix-style streaming service have reached fever pitch in recent months, with the firm reportedly spending big bucks on original content in order to compete with the likes of Amazon and Netflix. Apple’s budget is reportedly smaller than other streaming services, however, with Apple said to only be spending $1 billion on original content – the amount Amazon is supposedly spending on its Lord of the Rings series.

Despite a lower budget, Apple is set to roll-out big-name stars in order to win the attention of viewers. The company is reportedly working on a CIA drama series starring Captain Marvel herself, Brie Larson. That’s in addition to a rumoured multi-year deal with Oprah Winfrey, and a limited series based on the novel Defending Jacob starring Larson’s fellow Marvel superstar, Chris Evans.

Services Will Be Key For Apple’s Future Success

Apple has already demonstrated it will bullishly pursue opportunities in the services sector, with the firm already having a track record of competing with established service providers. Apple Music was initially dismissed for being unintuitive and offering nothing massively different from established offerings, such as Spotify and Pandora, but the hasn’t stopped the service from amassing over 56 million subscribers. While Spotify still dwarfs Apple in total subscriber numbers, Apple and Spotify are neck and neck in paid subscribers in the US.

Service revenue has been one of the biggest growth factors at Apple, and analysts expect that to continue. Morgan Stanley estimates that revenue from services could reach $100 billion per year by 2023, up from the nearly $40 billion of revenue it earned from services in 2018. With sales of the iPhone starting to dwindle, it’s no wonder Apple is hoping to achieve more revenue from the sale of monthly subscriptions and other services, rather than relying on costly hardware. Its new video streaming service will be a big part of growing those revenues.

Can Apple Succeed In Video Streaming?

There’s no guarantee that Apple can succeed in competing with Netflix, however. While it has experience selling other people’s content on platforms including Apple Music and iTunes, the firm hasn’t exactly been hugely successful when it comes to creating original video content. Carpool Karaoke: The Series and Planet of the Apps represent Apple’s first attempts at original video content, and both have largely been panned by critics and viewers alike. While it’s early days for Apple, it should be noted that Netflix didn’t face the same problem with its early original content – with House of Cards being a huge success for the streaming platform.

Not only has Netflix been more successful in its earliest attempts at original content, but the firm is also spending considerably more than Apple. Analysts estimate that Netflix will spend around $15 billion on original content in 2019, dwarfing Apple’s content spend. Ultimately Apple is hoping that it can win out on quality, but Netflix’s quantity means it’s likely to have something for just about every viewer; which it will need if it hopes to grow its subscriber base even further.

Even if Apple does produce quality original content, there’s no guarantee that viewers will watch it. While series such as House of Cards, Orange Is the New Black, and Stranger Things have all been commercially and critically successful, other streaming services have failed to replicate Netflix’s success. Amazon has achieved critical success with shows such as The Marvelous Mrs. Maisel, but it hasn’t garnered the following that Netflix boasts with some of its top shows. Apple could face the same situation.

There’s another significant obstacle that Apple will need to get over in order to succeed, as the firm won’t only be competing with Netflix. Apple is set to enter a market that is about to grow exponentially. Disney and Warner Bros have confirmed that they’re set to launch their own video streaming services in 2019, and both have decades of experience in producing quality original content. The two firms also have existing IPs which viewers know and love; Disney in particular will lean on this strategy, with series from the likes of Star Wars and Marvel being created to attract subscribers.

That’s not to say Apple can’t succeed; the company has taken its time to hone its strategy and has even hired top talent from across the TV industry. That includes the likes of Jamie Erlicht and Zack Van Amburg, both former Presidents of Sony’s TV arm. In addition to direct hires, Apple has also struck deals with Steven Spielberg, M. Night Shyamalan, Reese Witherspoon, J.J. Abrams and many other big names in order to add star power to the company’s streaming platform.