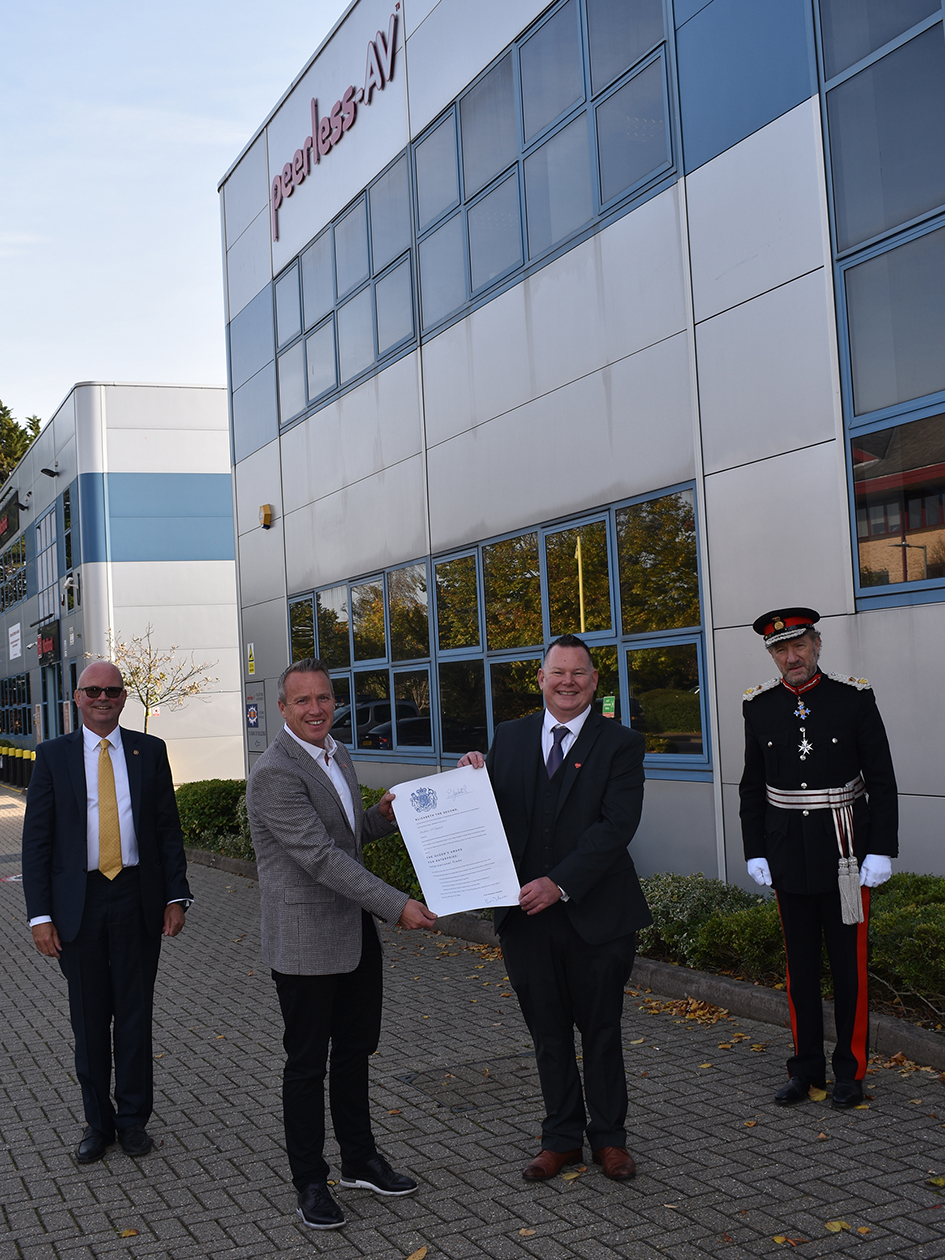 Peerless-AV is celebrating the official presentation of the Queen’s Award for Enterprise 2020 for International Trade by HM Lord-Lieutenant of Hertfordshire Robert Voss CBE and his Deputy and Vice Admiral Alan Richards CB JP DL.

Members of the Peerless AV EMEA team are planned to be invited to Buckingham Palace for a Queen’s Award winners celebration in 2021. Only around 7,000 UK businesses have received this award since 1965.

The EMEA business was formed in 2009 when Peerless Industries Inc acquired UK company BBG Distribution Limited. Despite 2009 being one of the worst recessions in Global history, Peerless-AV was launched and has since won a number of industry awards, and has massively increased its sales and profile not only within the UK, but all over EMEA and globally.

John Potts, President & CEO of Peerless-AV, stated: “We are absolutely thrilled that Peerless-AV has been honoured with this Queen’s Award and I would like to recognise the huge contributions that so many of our team have made in winning this award, including Gordon Dutch, Keith Dutch, the late Melinda von Horvath, and all our teams based in the UK, EMEA and globally.”

Keith Dutch, Managing Director, EMEA, Peerless-AV, confirmed: “We are obviously delighted to finally receive this prestigious Royal accolade, as it acknowledges the hard work and commitment that we have invested to develop our international business. I am confident that this respected award, and its globally recognised symbol, will further help drive our export business and the worldwide standing of Peerless-AV to new heights.”

In an official letter from the Lieutenancy Office, Robert Voss CBE, HM Lord-Lieutenant of Hertfordshire, wrote:

“I am delighted to take this opportunity to congratulate you on the momentous achievement of winning a Queen’s Award for Enterprise. For a company to win any award is in itself something quite special but to win a Queen’s Award is considered the ultimate accolade. I am well aware that the awards are extremely competitive with many thousands of entries so by winning, you proved that you are the crème de la crème of Hertfordshire’s (and the UK’s) businesses and on behalf of the Lieutenancy of Hertfordshire and the whole county, I salute you.”