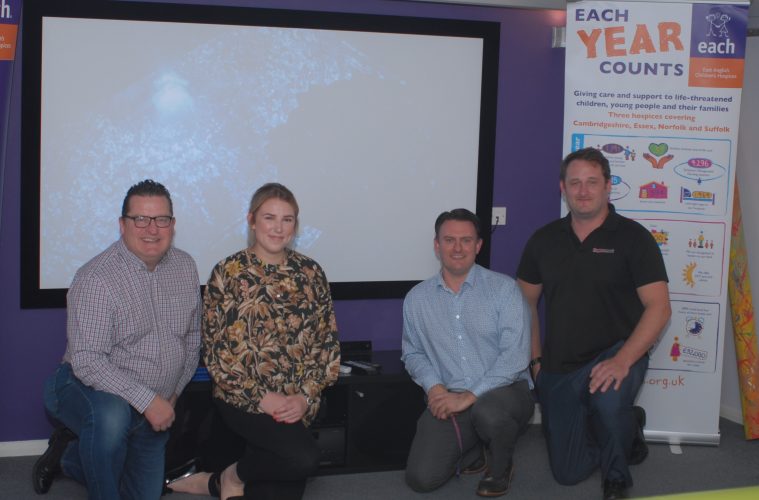 Together For Cinema has completed a £12,000, state-of-the art home theatre install at East Anglia’s Children’s Hospice (EACH) in Milton – thanks to the generosity of a number of organisations. The project was installed by Hughes Smart.

Everything was carried out at no cost to the charity as it operates on product and time donations from commercial organisations.

Together for Cinema was the brainchild of Ian Morrish, who has had a lifelong career in the AV industry. Ten years ago, he watched a TV programme about Donna’s Dream House in Blackpool, a Free Holiday Experience for children with life-threatening illnesses, which led him to set up the organisation.

“Our goal is to complete 25 installations before 2020 – EACH is number 24 which we estimate has taken us through the £500,000 barrier in terms of donations from our industry,” said Mr Morrish. “As with all these projects we rely on the generosity of many organisations and this one is no different. So, thanks go to RTI, Harman, Arcam, TDI, Optoma and Projector Point for supplying the equipment and we are pleased to be working for the first time with Hughes Smart, who carried out the installation.”

“At Milton we have a space called ‘The Den’ used mainly by teenagers which we thought would be ideal to double up as a cinema room,” added Mike Higgins, EACH Service Manager. “It has sofas and bean bags as well as hoists and we will be able to have around 15 young people in there to watch films. We are hoping to run Saturday matinees and maybe with pizza too!”

“When we were approached by Together for Cinema via our trade body, CEDIA about the project, we were very happy to help by providing the necessary skilled engineers to carry out the planning and subsequent fit out,” added Ashley Shorey-Mills, General Manager at Hughes Smart. “There were some challenges, not least having to work around the hoists, but I am pleased to say we managed to overcome them and are delighted with the finished result. We are thrilled to have been involved with this project which will be of such benefit to EACH in the great work it does supporting so many people.”