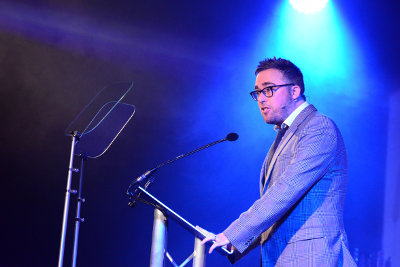 Comedian Danny Wallace will host the CEDIA Awards at the Natural History Museum in London this Friday.

Best known for starring in shows such as ‘How to Start Your Own Country’ and ‘Awkward Situations for Men’, Danny is also a highly regarded writer, having written for both ‘Dead Ringers’ and ‘The Mighty Boosh’.

The CEDIA Awards is in its tenth year, with the show expecting over 400 guests, surpassing last year’s record of 350.

“A natural presenter and comedian, Danny is sure to make the awards a lively night of humour and great entertainment.  With a show-stopping venue, a strong set of finalist entries and now with Danny Wallace confirmed as our host, it is without a doubt that this year’s awards will be a night to remember!”

Danny’s job on the night, on top of the usual hosting duties, will be to award the winners of CEDIA’s best projects in smart home integration, as well as the best media rooms, home cinemas, integrated homes and super yacht installations across the EMEA region.

Tickets for the CEDIA Awards 2015 are still available from the CEDIA website.

More from the CEDIA Awards