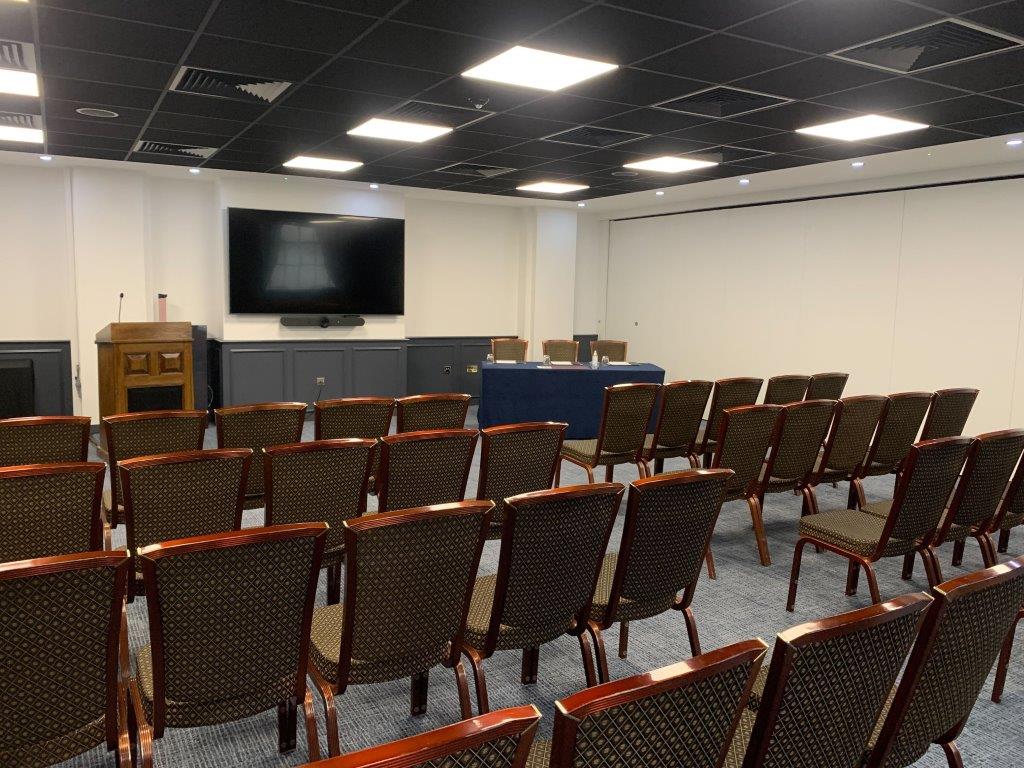 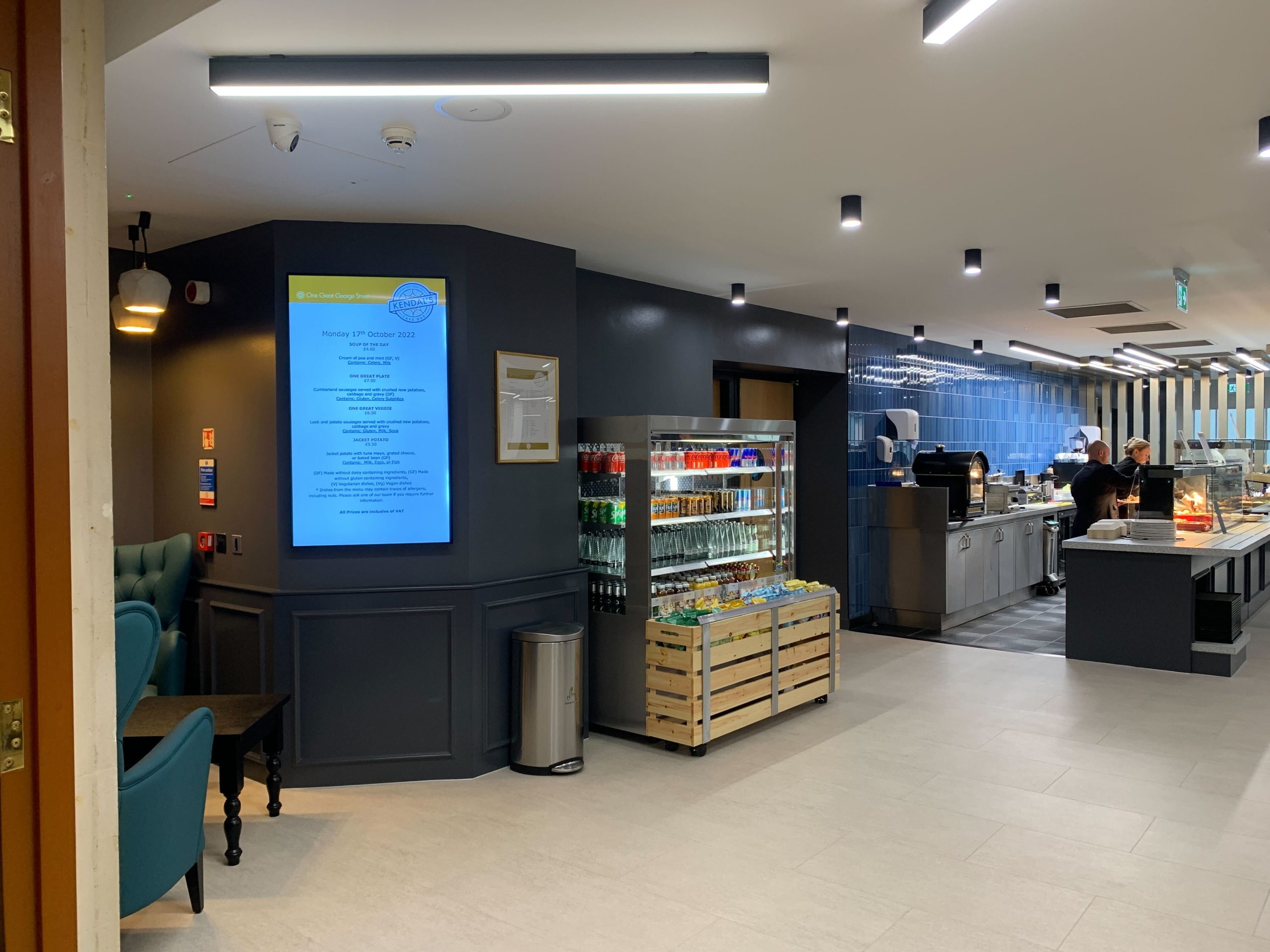 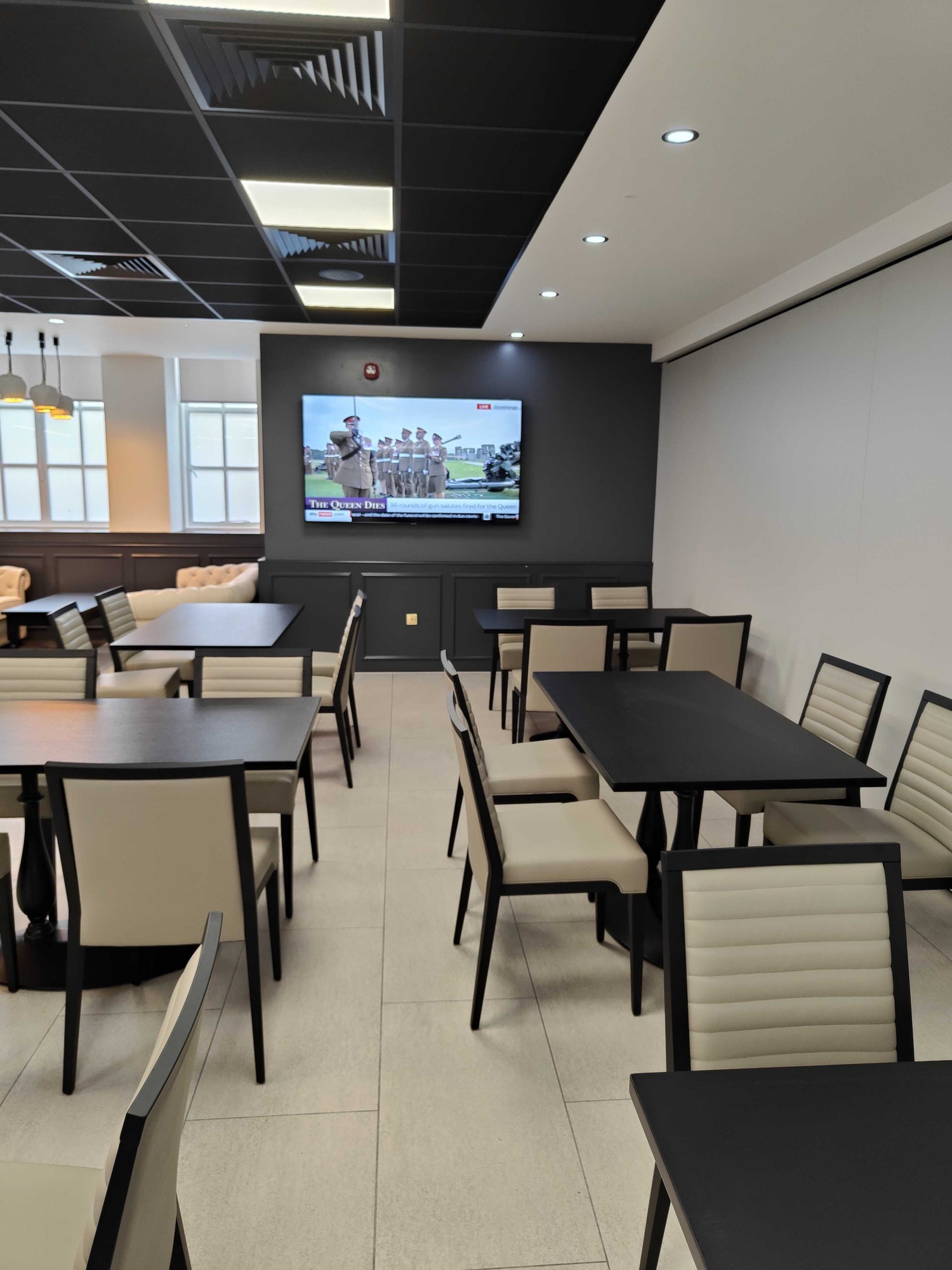 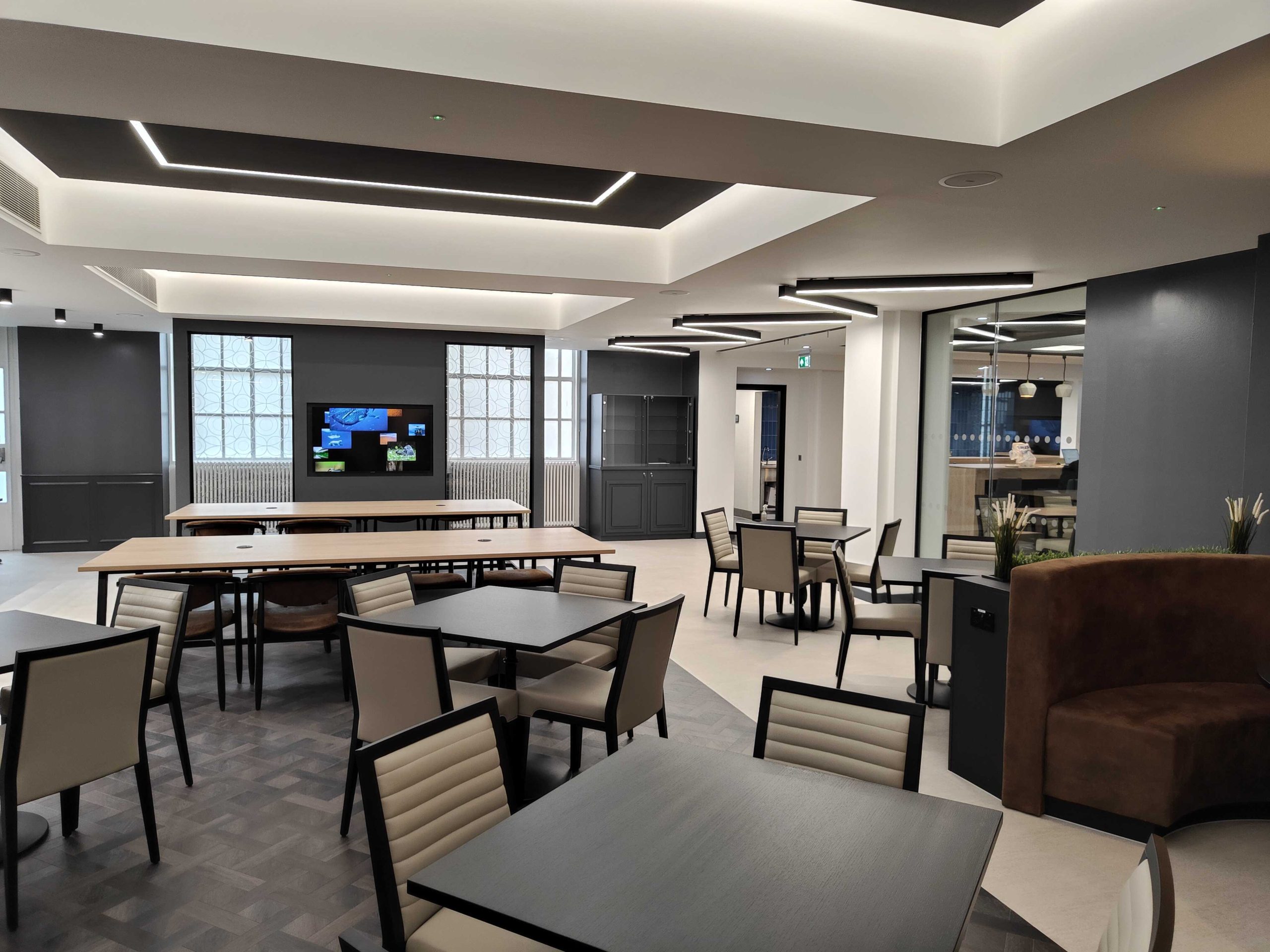 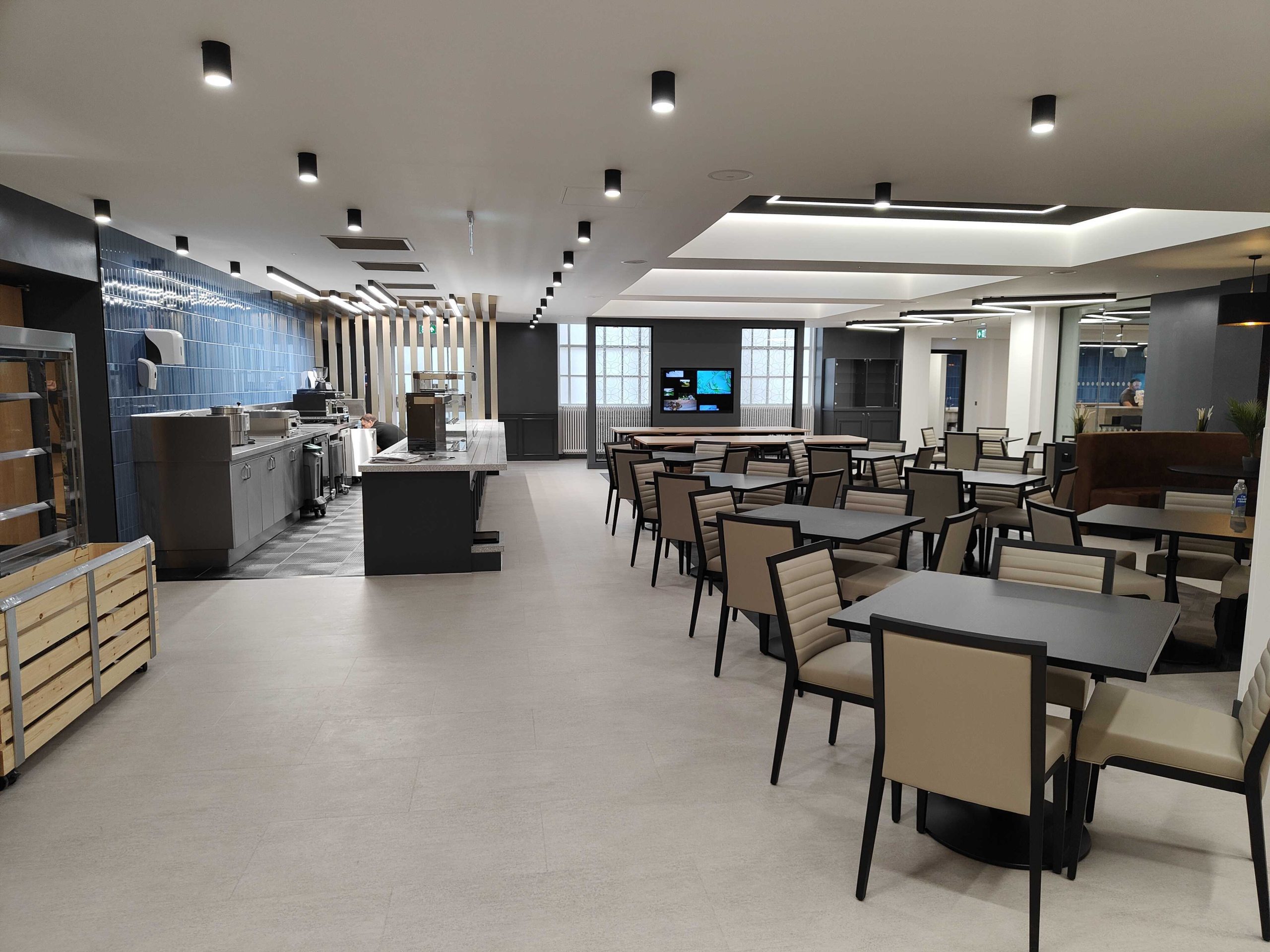 A magnificent Grade II listed, four-domed, Edwardian building gets AV maker over. Located in the centre of Westminster, One Great George Street (OGGS) is a historic Grade II listed building which was constructed over 100 years ago.

With 21 function rooms, the venue can host a variety of different events including wedding ceremonies and receptions, Gala dinners and corporate events. Located on the ground floor is a large café/brasserie and a meeting room.

As the existing café was dated, the overall objective was to modernise the space to increase footfall and become the ‘heart of the building’. The Lower Ground Café comprises of three main areas:

The aim was to design a space where all three areas could become one main zone. As the project was a complete refurbishment, OGGS appointed Claremont GI to design and build, and Runtech to carry out the design, supply, and installation of AV solutions. Working with Claremont, Runtech proposed a solution that increased efficiency of the overall space with area/seating configurations that were flexible.

The requirement for this room was to become a flexible meeting/ training/ seminar space with a connection to the coffee house via the removal of a partition wall. Runtech installed one 85in 4K Samsung commercial display. Due to the structural pillars, the wall needed to be built out and modified to accommodate the screen. To facilitate video conferencing, a Logitech Rally Bar was installed along with three mic pods. Four Bose in-ceiling loudspeakers were mounted in the ceiling tiles for the ZeeVee IPTV and background music only. Additionally, to provide a wireless VC/ presentation option, Runtech connected a Barco Clickshare to the Logitech set-up.

Runtech installed one 75in display for IPTV and digital signage which was flat wall mounted. Similarly, to the flexible meeting room, four Bose in-ceiling loudspeakers were mounted in the ceiling tiles for the ZeeVee IPTV audio and background music only.

Located in the corner of the Coffee House, is a private room to store the control system. The head end included…

Simplicity was key for the client, as the café staff would be controlling the technology. Ultimately, the client wanted to be able to send video to any screens via ZeeVee and audio to any Zone using the Kramer touch panel.

The café features three huddle booths, acting as a non-private meeting space as well as a dining option. Within the middle booth, Runtech installed 32in displays along with an HDMI connection plate for laptop presenting. This booth also picks up the main IPTV system.

Along the wall which overlooks the seating area and entrance, Runtech installed a 55in Samsung commercial digital signage display. Additionally, a 55in Allsee digital menu was installed in portrait on an angled wall as you enter the café. Lastly, twelve of the same Bose in-ceiling speakers were installed around the café to provide high-quality background music around the café.

A OGGS spokesperson comments, “Runtech again have shown to be an excellent installations partner. The pre-production and design was above what was expected, the install was of extremely high quality and their service post-completion has been excellent. Chris, Marc (Marc Gravett, Project Manager, Chris Liebrand, Managing Director) and the team have done a fantastic job on this project.”