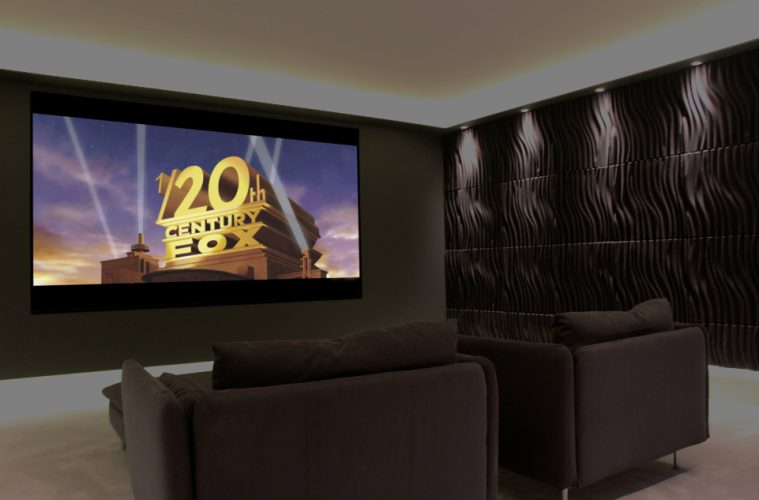 The client was adamant that they did not want a TV in the movie room, and were sceptical about projectors.

“They wanted a big screen movie experience but needed reassurance that a projector will deliver on picture quality,” Zak explains. “Having only experienced cheap office projectors in the past, after a demonstration they were surprised at the quality delivered by a good, mid range HD projector.”

However, by the time the basement was built and ready to start work on it, the original architect’s design was abandoned due to the complexity and costs involved. The install team were asked to provide a new, simple and elegant design on a budget, without much compromise in the picture and sound department.

“The concrete room shell was of a decent size (6m x 5m) but with a ceiling on a low side,” Zak recalls. “Walls were then laid with a sandwich of Styrofoam, plywood, mineral wool and acoustic plasterboard. Our new design included a coffered ceiling with perimeter lighting in order to keep as much height as possible.”

Behind a screen, a baffle wall was constructed from plywood with MDF back boxes for LCR speakers and two subwoofers. “We specified a 110” slim frame Screen Excellence projection screen which was then sunk into a wall so that it appears totally flush with a surrounding wall. On the opposite screen, a projector was built into a custom designed cupboard with only cut outs for the lens and ventilation visible. Placing a projector inside totally neutralised the projector’s fan noise.”

Due to budget restrictions, off-the-shelf acoustic panels were used on sidewalls. The panels addressed early reflections and flutter from screen speakers and helped dialogues cut through: the depth of panel is designed to give a high absorption of sound, resulting in an efficient 0.95NRC, in addition to eliminating background noise as well as reducing room reverberation.

The surround speakers were mounted on the ceiling and left exposed (without speaker grills). Since the outer side of the ceiling was painted a dark shade of grey, these blended in well and became a feature in their own right. The thick carpet and a pair of comfy chairs with separate footrests helped with low-end absorption.

Rako lighting modules were installed, controlling a number of LED strips and downlighters. A small cinema rack was installed in a dedicated ventilated space.

Other sources include a Virgin TiVo box, a Panasonic Blu Ray player/streamer, an Apple TV and a pair of Sonos amps.

The projector that won the customer over was a Panasonic HD PT AT6000 full HD 3D home cinema model. Everything in the cinema room – including the lighting – is controlled with an Apple iPad mini, running iRemoteControl software using Global Cache IR over IP modules.

“The finished room is very pleasing to the eye, with the picture and sound to match,” says Zak. “There are lots of nice details, such as the flush mount projection screen, a bespoke projector cupboard, room colour co-ordination, wall panels and so on. The clients were very co-operative and gave us free rein to make the best room we could. They especially liked the fact that all the speakers, including the two subwoofers were hidden behind acoustically transparent screen and those that were visible on the ceiling blended in and provided a nice detail.

“With the three small children safely in bed on the top floor, the parents can enjoy movie nights in the basement, keeping an eye on them on the iPad via IP CCTV baby cams,’ he adds. “The room is now used more frequently than originally expected and the family have already invested in a proper popcorn machine!”

The customer is also thrilled: “We are very pleased with our cinema; it turned out better than we imagined. It beats watching a movie on a TV any time. We are now looking forward to going there and putting a movie on!” 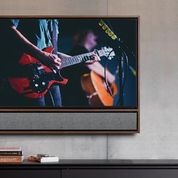