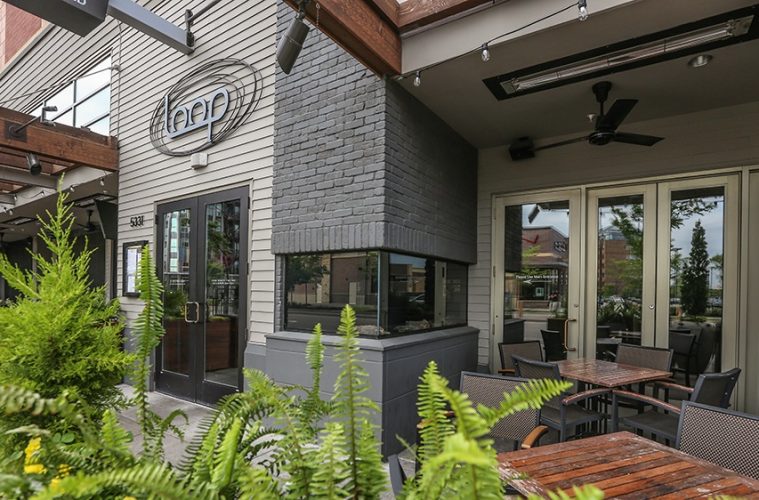 Whether it’s the big game on a Sunday, a low-key dinner on Wednesday evening, or a live DJ set on Friday night, Ryan Brevig is determined to entertain his customers in all three of his contemporary American cuisine bar and bistros.

To keep customers coming back however, Ryan sought the most cutting-edge entertainment system on the market that could accommodate his need to party hard.

Eventually that search led Ryan to Xtreme Integration, which designed and installed an AV system in several of the company’s eateries; including Loop-West End, Loop-Rochester and Five West Kitchen + Bar.

Pat McPherson from Xtreme Integration led the installation and opted for an ELAN control system, which is used to transform the atmosphere in each of Ryan’s restaurants.

“In order to survive in a somewhat fickle industry, I knew that my restaurants had to be extremely dynamic,” Ryan explains.

“That’s why I had to install an AV system with a central control system that allows my staff to easily alter a restaurant’s atmosphere and mood with audio and visual content. Without ELAN, this vital transformation wouldn’t be possible.”

In all three Loop locations, visual elements are key to the entertainment. To ensure that diners can view a screen from just about anywhere, Pat installed 20 46-65in Samsung TVs, 70in Sharp TVs and two Outdoor Sunbrite TVs in Loop-West End, 18 46-65in LG TVs in Loop-Rochester and 25 40-65in Samsung TVs in 5-West.

“For Ryan, it was vital for customers to have television screen access from anywhere in each restaurant,” Pat says. “This required a significant amount of planning and strategy in developing the layout, but in the end, it guarantees that every diner will be able to watch the game, regardless of location.”

In addition to serving as a community bar and restaurant for customers, all three of Ryan’s restaurants host various events depending on the day and time.

On Saturdays, the Five West Kitchen + Bar serves as the official home of the University of Wisconsin’s Alumni Association, where each seasonal football game is proudly broadcasted.

“In order to mimic a stadium-like experience for the Alumni Association, I have to keep spirits high during the commercial break,” Ryan explains.

“That’s why, on game day, we have an on-site DJ that immediately takes over once the game switches to adverts. Adverts kill the energetic atmosphere in the room,” Pat adds.

“Obviously, an effective control system is essential to switch between video output to DJ output once that break happens.”

On Friday nights, the restaurant transforms into a club for local Minneapolis youth.

“We really crank up the energy in the room so that people can dance and enjoy themselves,” Ryan notes.

“On Friday evening, we can watch the dinner crowd slowly transition into the evening club crowd before our very eyes. The technology definitely assists in that seamless mood and atmosphere transition.”

To ensure that control is quick and easy, two ELAN touch panels and one Apple iPad are securely mounted into the walls. Additionally, each set of employees has the ELAN mobile App on their phones to operate the system at will.

This allows any employee on duty to assist in switching the inputs over from one system to another, or to simply accommodate a guest’s request.

“Waiters have told me that customers think it’s cool when they whip out their phone on the spot to change a song,” Ryan notes. “The capability certainly adds an element of interest on the customer’s end.”

With the constant change in mood, atmosphere and purpose, guaranteeing that all of the technology seamlessly connects to each other is absolutely vital.

That’s why, along with an ELAN control system in each restaurant, McPherson also installed Xantech products to optimise IR and RS232 control of the system equipment, paired with Panamax and Furman power conditioners.

“Xantech centralises the point of control and ensures that seamless, guaranteed control is possible for anyone using the ELAN mobile App. Furman and Panamax have always been our ‘go to’ for power distribution,” Pat says.

Ryan, along with the employees in all three of his facilities, recommend a control system for any restaurant owner looking to achieve success in a saturated industry that’s easy to fail in.

“Honestly, I fell in love with the system,” Ryan concludes. “I am going to be installing the ELAN system in two of my other Minneapolis-area restaurants. It helps my facilities look and feel like an entirely different places within seconds- which is what is going to keep restaurants in business in the future.”

Speaking of the decision behind an ELAN system, Pat adds: “We were able to present the solution to an existing customer. We looked at different avenues of control and ELAN was solution we use quite regularly in higher-end Residential applications and knew it were robust enough for commercial applications as well. So far, we have had great success in all three venues.

“We chose the Elan products for the projects based on the customer’s needs.  Typically, their establishments used 6-8 cable or satellite boxes and was easy to pair with an HDMI Matrix solution.

“Elan makes it very simple to design the projects using the products/manufacturers listed in the Integration Notes.

“Nothing really stood out for us on the projects. Elan works very well to control multiple TVs and sources through HDMI matrix solutions. Very easy to install and program. And thus far, flawless control solution.”