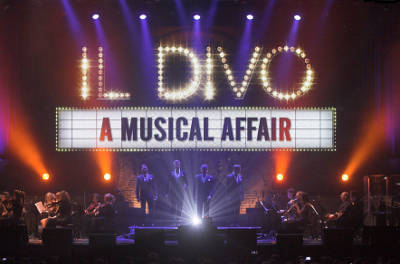 Now on its final leg through the UK and Europe, the tour’s video elements are being coordinated by Stuart Merser of Vis-à-Vis Video. Stuart designed the touring screen and visual concept, is directing the camera mix and also produced the playback content together with James Cooksey from Basic Monkey and Ben Mason at Red Dog.

The Musical Affair show originated as a special run at the Marquee Theatre in New York, and their set features classics from various Broadway blockbusters.

These theatrical references informed the creative starting point for the touring video, together with the fact that a large section of the tour in Asia utilised local productions. Stuart was keen to ensure that the design was likely to be attainable without compromise.

The addition of a female vocalist for some numbers – Lea Salonga being the most regular – also added a new dynamic to the show, together with Il Divo’s own input into the brief, which was that they wanted to be able to feel the atmosphere and emotion of each of the different songs through the visual elements of lighting and video.

To attain this goal, Stuart worked very closely with lighting designer Dan Tiley on developing the show into a highly integrated experience that synergised the two disciplines.

The upstage screen product is XL’s Pixled F-11, measuring 20 tiles wide by 10 high – a 2:1 aspect ratio – which floats just above the set.

With an orchestra, a conductor, Il Divo and the various soloists onstage, Stuart wanted to use video and moving images to achieve two further things – a sense of theatrical intimacy – however large the venue might be and a simple and uncomplicated narrative that would add to the music and lyrics.

The latest Catalyst media servers feeding the F-11 are owned by Stuart and are timecode triggered – along with the autocue – with a DVI matrix in-line to route the sources to screen.

XL’s camera package comprises four Sony HXC-100 HD operated units, two fitted with long lenses and positioned at FOH, and two on track-and-dolly in the pit fitted onto Osprey air pedestals, adding another dimension of movement to the IMAG mix.

Stuart uses a Panasonic MX45O mixer to cut the mix and comments. Meanwhile, the IMAG is output to two 20-ft wide by 11.5-ft high side projection screens – each fed by two Barco 22K machines.

“XL are still my first choice of touring video supplier – the service is consistently good and the crew are excellent,” enthuses Stuart.

Production manager Andy Proudfoot has a long history with XL Video. XL’s project manager is Paul ‘Macca’ McCauley, who has worked on the Il Divo account for the last three tours.

“They are all talented technicians, very dedicated to the job and we make an excellent team,” says Stuart. “It has also been great working with XL and a pleasure working with Macca again. He’s been on the road himself and fully understands and appreciates all the issues and challenges involved.”