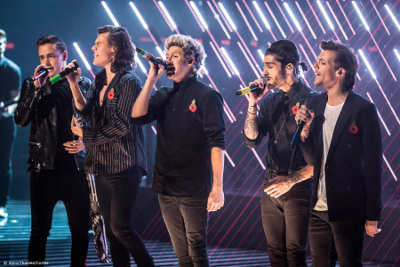 Working with One Direction and the band’s creative director, Lee Lodge, XL Video provided 144 Barco MiStrip LED batons which were housed in a custom structure created by design studio, Artisan, as a backdrop for the band’s performance of their recent single Steal My Girl.

The MiStrips complemented an abundance of lasers behind the band, while content for the batons was controlled by two of XL’s d3 media servers.

For this mapped projection, XL Video supplied six Barco HDQ-2K40 projectors, which covered the surfaces of the rear blocks and dancer podiums.

The platform on which Take That performed their hit These Days was covered by two of XL’s Panasonic 20K projectors.

Barco MiStrips were also used for the appearance of returning X Factor winner Sam Bailey, who performed With You.

Mounted on vertical stands, 60 of XL Video’s MiStrip LED batons surrounded the singer as she performed the ballad.

Another X Factor returnee, Ella Henderson, performed her single, Yours.

A semi-circular tunnel style structure was designed by United Visual Artists and to light the structure, 10,000 of XL Video’s individual Barco FLX-24 LED pixels were used, creating the effect of waves of light.

“We often get requests for something a little different for artists appearing on iconic shows like The X Factor,” explains XL Video’s TV and film manager, Jeff Bailey.

“This enables the artists to create something really unique and spectacular for their special performance on the show. For each of these performances, we were able to supply a custom creative solution to satisfy each act’s unique requirements.”

Never Mind The Buzzcocks! – with a little help from XL Video