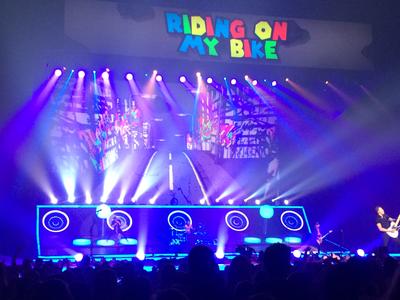 McBusted, the supergroup formed by combining artists from McFly and Busted, are enjoying runaway success, with XL Video helping the band with its recent UK arena tour.

The band needed a show design that embodied the energy of the group, which meant non-stop, high-octane narrative set in a classic 1980s arcade games machine.

Artistic director Paul Caslin designed the set, knowing exactly what the band needed having worked with both McFly and Busted for 10 years.

For the design, the band needed unique elements such as a giant sized fully-working and playable version of a classic games console.

To create the design the company in charge of the technical co-ordination, Production North, enlisted the help of XL Video with 350 tiles of Pixled F-12 LEDs being brought in to make up the header of the machine.

XL Video is also supplying four Sony HXC-100 cameras and a BlackMagic 2ME ATEM switcher which features inbuilt multi-viewer screens, which was a must have for Stuart Merser, who programmed the Catalyst V5 media server.

One camera is positioned at FOH with a 70 box lens, two are on track-and dolly in front of the VIP area – created by an oval-shaped runway emanating from the front of the stage on which the band spend a lot of time charging around. These are both fitted with 22 x lenses.

The fourth camera is fitted with Stuart’s own RF back and serves as a roaming hand-held fitted with a J14 x 4.3 wide angle lens.

Operated by Phil Johnson, it lurks around the thrust and moves out to the B stage just in front of FOH to get all sorts of interesting and more off-beat shots of the band and the audience.

On top of these are three of XL’s own mini-cams on the tour, which Stuart describes as ‘the best mini-cams’ he’s ever used.

The HDiye units feature a 2.1 megapixel DSP chip that produces full HDI 1920 x 1080 resolution at 60 FPS and a 3G HD / SDI output, and he first specified them for the Blink 182 tour last year. On this, two are focused on the main stage drum kit and one on the B Stage drum kit, which is also a full setup.

In addition to the LED screens, there are two side IMAG screens, each measuring 21 x 11.5ft (16:9 aspect ratio) which are each fed by a single front projecting Barco 22K projector mounted on T-trusses.

The cameras are multi-routed. Everything going onto the side screens is fed directly out from the PPU, while all sources going to the onstage screen and banner are channelled via the Catalyst, where some of the footage also receives additional treatments.

The stage set console is fully playable – the buttons are triggered by IR beams and the joysticks are micro-switch controlled, all wired back to a classic games console.

The audio feed from the console is played out through the PA while the video feed goes to the big screen.

XL Video believes it may be the largest ever working video games console ever built. 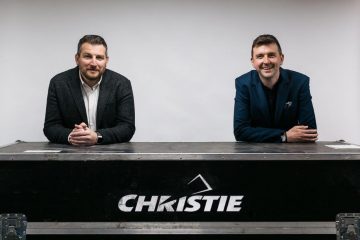