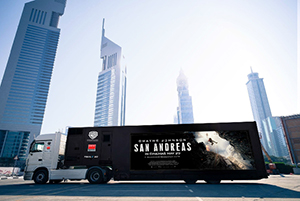 Cinema goers in Antwerp, Belgium, were treated to an immersive 4D experience on May 14 and 15 as Warner Bros’ CineTransformer stopped at the Kinepolis multiplex to promote the brand-new Warner Bros action-thriller San Andreas.

The CineTransformer, a huge trailer that can be easily converted into a mobile cinema, is equipped with a compact, fully integrated projector from digital cinema technology leader Barco. From Antwerp, it will head for Germany, the UK and Spain.

Developed back in 1995, the CineTransformer is a 53-foot double expandable trailer that can be transformed into a fully-fledged mobile cinema with 2D/3D and 4D capabilities, seating 91 people. Entertainment Warner Bros first toured the United States with a CineTransformer to promote Gravity in 2013.

In the month of May, a Warner Bros movie trailer travelled the States and Europe to provide a sneak peek of San Andreas, a new action thriller starring Dwayne Johnson. Fans in Antwerp, the first stop of the European tour, were invited to come out and watch an exclusive six-minute scene from the film in RealD 3D with butt-kicker seats and experience it in 4D.

Barco was happy to equip the trailer with a compact DP2K-10S projector, which is especially designed for smaller theatres, boothless cinemas and single screens.

“Fox Belgium, which is an official distributor of Warner Bros movies in Belgium, asked if we were interested in supporting the European tour. As Barco has been working closely together with 20th Century Fox for a while, it was only logical for us to team up,” says Wim Buyens, Barco’s Head of Entertainment.

Fox was an early endorser of the Barco Escape technology, working hand in hand with Barco throughout the last year to further develop the format and showcase new theatrical content to audiences. Earlier this month, Barco and Fox have inked a five-year, multi-title per year agreement to release movies in the Barco Escape format.

“Barco is really addicted to cinema and committed to offering cinemagoers an ever better, ever more innovative cinema experience,” says Buyens. “We’re therefore delighted to lend support to this initiative, which demonstrates how cinema can offer a truly unique and immersive entertainment experience.”

Kazakhstan Leans On Barco For World Expo 2015 In Milan