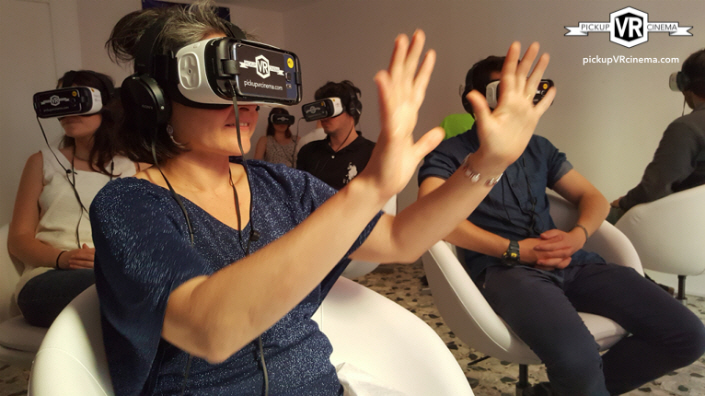 Using the Samsung Gear VR, PickupVRcinema screenings can host more than 30 people at a time, who will be simultaneously immersed in the world of virtual reality.

“During a typical VR screening at PickupVRcinema, the rush of emotion is tangible,” says Pickup. “The screams of couples, the laughter of families and the general excitement of the audience are just a few indicators of the uniqueness of the experience.”

Pickup was selected by this year’s Cannes Film Festival committee to manage the VR screening room of the festival’s Marché du Film – a festival that is well and truly investing in the best that technology can offer having just installed a permanent Dolby Atmos system.

PickupVRcinema is located in the centre of Paris at 113 rue de Turenne.

What is the gear VR?

Samsung Gear VR is a virtual reality device developed by Samsung Electronics in collaboration with Oculus VR. Only specific Snapdragon variants of the Samsung Galaxy Note 4, tied to US carriers, can be used as the screen and driving computer, mounted inside the Gear VR device.

The Gear VR headset includes a touchpad and back button on the side, as well as a proximity sensor to detect when the headset is on. The touchpad and button allow for a standard minimum input capability for users to interact with the virtual environments, whereas Google Cardboard devices only feature a button.

Which phones work with gear VR?

Users will need to invest in a newer Samsung phone to use Gear VR. Specifically, the Galaxy S6, Galaxy S6 edge, Note 5 and Galaxy S6 edge+ are the only phones thatwork with the new Gear VR.

When in use, a compatible Samsung Galaxy device (Galaxy Note 5, Galaxy S6/S6 Edge/S6 Edge+ or Galaxy S7/S7 Edge) acts as the headset’s display and processor, while the Gear VR unit itself acts as the controller, which contains the high field of view, as well as a custom inertial measurement unit, or IMU, for rotational tracking, which connects to the smartphone via micro-USB.

This IMU is more accurate and well calibrated with lower latency than internal smartphone IMUs, such as those used for Google Cardboard.