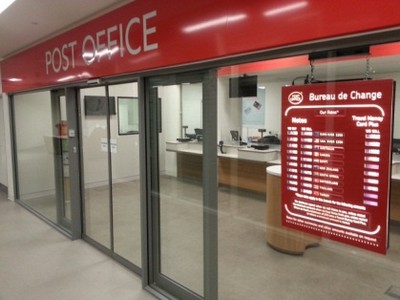 According to the brief, the Post Office wanted its new HQ and facilities to reflect the next stage of their business.

The audio visual element of the project needed to blend seamlessly into the background, with the décor being key – not boxes on walls or ceilings.

The company also stated that it wanted the technology to be easy to use, energy efficient and environmentally friendly.

When staff and Post Office clients enter the main reception they are greeted with a custom media wall consisting of Sony’s flagship laser projector with short throw zoom lens.

They then walk into an open coffee/casual meeting area where they are provided with a 3×3 Samsung UD55 video wall displaying software from a bright-sign signage HD player or any source from an Extron XTP main building matrix controlled via an AMX iPad App.

Ray Sappal, technical director at Visual Systems, comments: “The client wanted an area to make a huge impact when you walked in for a meeting or event.

“I think the use of the Samsung Video wall and custom software from the Brightsign signage player has done just that, it gives a large space a focal point.

“The good thing about the video wall is it can be used for so much more than just a large display and I think the client’s in-house team are now seeing the possibilities and are constantly coming up with new software to make the best use of the video wall.”

The main ground floor function area is made up of three meeting rooms with removable partitions linked to the open/casual meeting area.

This allows Post Office staff the flexibility of having either a large auditorium/function area or two or three meeting rooms.

Two of the three meeting rooms, including the open area, have a Christie DHD600 1080P Series projector installed.

This is controlled via in-wall or table-top AMX touch panels, or an iPad control for open area/auditorium use.

The third meeting room is equipped with a 2×2 UD55 Samsung Video Wall with a custom UTouch interactive overlay.

Sound in this main area is controlled via three Extron DSP DMP128 units and zoned, so depending on function certain areas can be on or off.

Sound is replayed through JBL pendant speakers hidden in between the gaps of the sound panels mounted on the ceiling.

PA is provided by six radio microphone systems, which can be assigned to any of the four areas depending on requirements and partition set-up.

Images from any presentation can be recorded or sent out via the use of four Sony HD SRG300 cameras mounted on the ceiling of the main area.

For larger functions or staff briefings, the image can be sent to all meetings rooms or to the Broadcast studio for web streaming.

Barco’s ClickShare wireless PC transmission system has been installed in each of the three main meeting rooms in the ground floor area to allow users to quickly connect laptops to any or all of the displays in this area if they want to avoid using cables.

A number of wired floor box locations are also provided, along with two technician plates for larger events where local control is required, or additional equipment or microphones need to be added into the system.

The AMX GUI displays a simplified UI as standard, which ensures normal employees can use the system without any fuss, although an advanced mode can be accessed using a password.

This allows technicians to distribute signals to any or all displays in the main/open function areas or send any input from the building matrix system to any meeting room, or all of them, if required.

The main boardroom on the first floor has a Samsung ME 95in display with a custom UTouch interactive overlay.

The system is controlled via a 7in AMX tabletop touch panel which controls the various inputs to the display.

The main boardroom’s Extron MPS switcher controls the various inputs to the display and sound level for the system which uses ceiling mounted speakers for program sound and Skype calls.

There are a further 39 meeting rooms spread over the ground, first and second floors of this building consisting of 12 projector rooms and 27 Samsung ME display rooms.

The Samsung display meeting rooms use the ME range of commercial displays which are all recessed into the wall.

There is a 50mm space around each screen which gives the impression that it’s floating.

All meeting rooms are managed through an online/email outlook service called Condeco where Visual Systems has installed 7in panels outside each meeting room.

If a room is occupied or vacant, this room booking system will display that information, allowing users to book rooms from anywhere in the world.

The site also has a mock Post Office built near the main reception area to show visitors what the Post Office of the future will look like.

It is also used as a training academy for staff and sub Post Masters.

Visual Systems has installed two Samsung 32in ME displays and a ME 55in display, which can route and display any of the five PCs used behind the counter thanks to the use of a Kramer DA Switcher.

The site also has four Samsung 55 inch ME displays mounted in the general office and tea point areas.

Ashwin Shah, chairman of Myriad AV Group, says: “Visual Systems worked very closely with the client, design team (HLW) and the main contractors (Shaylor Group) to ensure that the completed project was done on time and that the end result was how the client and design team had envisaged the areas to look.

“I feel the project was managed flawlessly by our in-house design and projects team overseen by Visual Systems technical director Ray Sappal.”