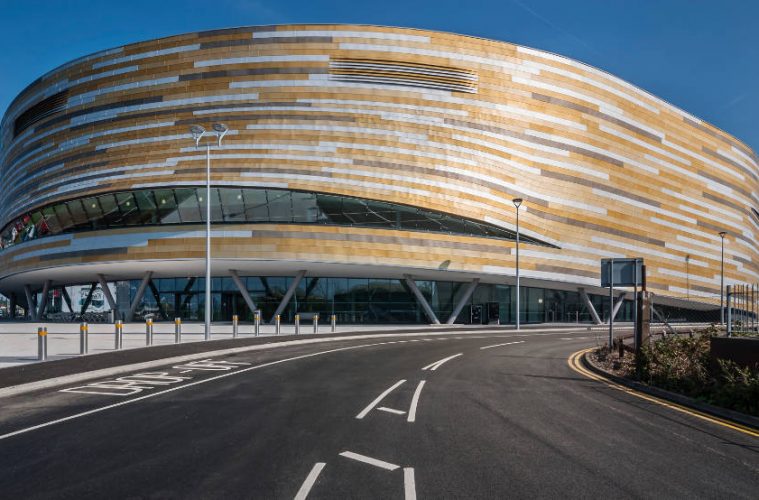 Derby’s new £28 million arena saw Tyco Integrated Systems install an extensive audio visual system into its 156,000sq-ft premises, including one of the first track timing systems in Europe to use induction loop technology.

Situated next to the iPro Stadium, home of Derby County Football Club, the Derby arena includes a national standard 250m indoor cycling track, a multi-sports area the size of 13 badminton courts, a gym with 150 stations, group exercise studios and a spinning studio and café.

Tyco Integrated Fire & Security was introduced to the project following the successful completion of an AV scheme for the refurbishment of Derby City Council’s main offices in the city centre.

In a £700,000 contract, Tyco developed an integrated strategy for the audio visual systems throughout the building.

“We were able to advise Derby City Council and main contractor Bowmer & Kirkland on the scope of the necessary equipment to meet the brief, any potential issues and deliver a solution that allows the centre to be used for sport or for entertainment purposes, such as concerts,” explains Steve Waldron, operations director for Tyco Integrated Systems.

An extensive installation, systems include a bespoke Swatch trackside timing system, developed jointly by Tyco and Swiss Timing the first loop track timing system in the UK and a Daktronics large format arena display board, a professional PA system using flying line arrays, a multi-point IPTV system available for the majority of rooms, digital signage in the café and reception area as well as meeting room presentation facilities.

Three Zones, A Lot Of Tech

Zone one features an Electro-Voice sound system for the velodrome/arena, which delivers 28kW of audio power to the auditorium via 28 speaker arrays.

DSP audio processing is utilised to counteract any reverberation, whilst a wireless microphone system by Audio-Technica was also installed.

For zone two, AV, digital signage and IPTV was installed in the gym, meeting rooms and exercise areas.

Zone three features the advanced Track Timing System, offering real-time timing information for riders and trainers was incorporated providing Wi-Fi access (for trainers and teams) throughout and a large display screen in the arena.

“All of the AV equipment was assessed on a quality, performance and price basis,” Paul Selvey, manager of project engineering and software at Tyco Integrated Fire & Security tells CIE.

“All of the speaker locations had to be accessed from in-field within the track and many were positioned by reaching over the track towards spectator seating. In some cases this meant a reach of over 10m out, at heights up to 20m”

“Additionally, where appropriate the equipment manufacturers’ ability to provide support and expertise during the implementation of the project was also a crucial factor.”

Paul points out that whether a project is large or small there is always the desire to do the best possible job. “We always want to deliver for our customers,” he says. “The Derby Velodrome was typical of many large, complex construction projects in that the coordination with other construction activities on site was a constant challenge. It meant our teams often were faced with limited time to work, however I am very proud of what we achieved given the time constraints.”

The sound system had to provide uniform coverage over the venue during different usage scenarios while utilising the minimum number of speakers.

“This presented a unique challenge for the installation of the equipment into the optimum speaker positions,” Paul reflects.

“All of the speaker locations had to be accessed from in-field within the track and many were positioned by reaching over the track towards spectator seating. In some cases this meant a reach of over 10m out, at heights up to 20m.”

Adding to this, plant access to the stadium was tightly controlled in terms of total weight, outrigger point loadings and overall stowed size.

“We selected a Teupen LEO30 spider tracked access platform, of which there were only a handful in the country, to enable us to reach all speaker positions,” Paul explains.

“The largest of the speaker arrays stand at 2.5m tall, weigh 190kg and were winched into position at a height of 15m. Due to the large scale of the Velodrome and the approach selected for installation of the speakers and arrays, the aesthetic impact is kept to a minimum.

“My favourite part would have to be the sound system, just because of its sheer size and capability – it’s really impressive and this is a project we are really proud to have been a part of,” he enthuses.

“It is always exciting to install and commission large powerful sound systems, especially when you hear them as they are switched on for the first time. The track timing system was innovative and one of the first in Europe to use induction loop technology. This part of the project was sub-contracted to a third party supplier where Tyco Integrated Fire & Security played an integral role in the design of the system in terms of equipment distribution and installation methods.”

“Tyco took ownership of the AV scheme, designing, integrating and delivering all of the AV systems as one whole package,” Steve concludes. “Through a meticulous approach, with regular team meetings, we have delivered a truly integrated system which will help the arena to become one of the best-equipped sporting venues in the UK.”