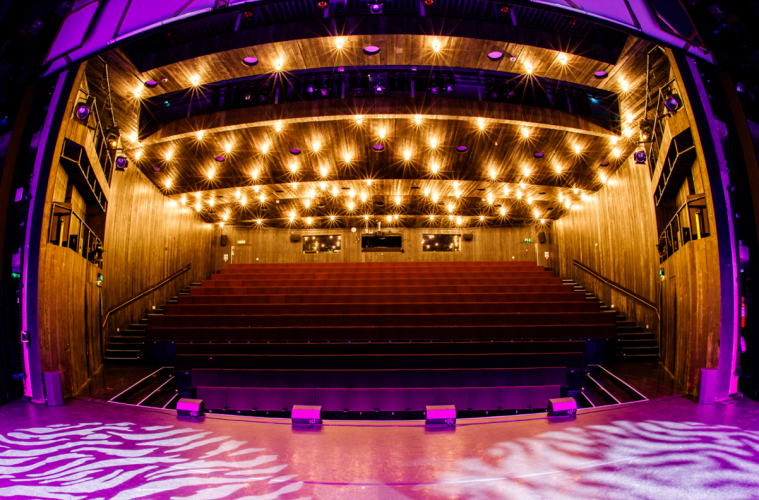 Trinity Laban Conservatoire of Music and Dance is the UK’s only Conservatoire of music and contemporary dance. With two separate faculties for dance and music in south east London, the establishment today is the result of a 2005 merger between Trinity College of Music and Laban. When the decision was made to upgrade the sound system at the Conservatoire’s Faculty of Dance in London SE8, Trinity Laban turned to Autograph Sound who designed, implemented and commissioned an innovative multi-role sound system from EM Acoustics.

Autograph’s  Business Development Lead Euan Mackenzie handled all the project specification and system design for this very focused application with some unusual requirements: “Performers in contemporary dance need to feel that they are part of their audience and experiencing the same auditory stimulus, so the system had to be completely immersive in the unusual sense that the sound field had to seamlessly cover not only the audience area but also the stage,” he explains.  “We achieved that by careful placement and time-alignment of the various loudspeakers, so that the acoustic image appears to be behind the dancers, creating what is in effect a single performance space which is shared by the performers and the audience. However, the other part of the brief required that the space should also be able to be used for full musical theatre productions where natural, transparent vocal reproduction is as important as musicality – which led us to think that we’d need a couple of different configurations to achieve what the client wanted.”

Given the scope of the project, Autograph decided on an EM Acoustics solution for Trinity Laban. “We built the system around EM Acoustics’ new Reference Series R10 as they simply sound astonishing. Importantly, it also allowed us to not only replace the FOH system but to include the new stage system as well whilst remaining in budget.”

Three of the new R10s were used in Mackenzie’s design, forming the main system along with two S-15 compact reflex subwoofers, with two S-18 subwoofers and four EMS-101X fullrange units covering the stage. Four EMS-61s are located as front fills (used for musicals, or when vocal imaging is critical) with two more EMS-101Xs as in-fills (for contemporary dance so dancers can use the stage-front as part of the performance area) while four EMS-81Xs handle surround duties. The entire setup runs off just four of EM Acoustics’ own advanced system amplifiers, three DQ10Ds and one DQ6D, all equipped with a Dante networked audio input card.

“As is always the case, we were working within strict budget constraints,” continues Mackenzie. “Happily, as the design evolved, and with the help of some sophisticated signal processing and creative loudspeaker positioning (including the two larger S-18 subwoofers hidden at the back of the stage to accompany the compact subwoofers in front), we created a single system for the space that can flip from ‘fully immersive’ to ‘visiting musical’ modes in seconds via the client’s existing Yamaha processor. In this way we stayed within budget and satisfied their needs fully.”

A spokesperson for the school notes that, “In contemporary dance, it’s not uncommon for choreographers  to utilise the whole space for sound, leaving no separation between the stage and the auditorium, so we needed a system that could also be configured to create one unified sonic image in an instant if needed. Autograph achieved this by creating a patch on our Yamaha MTX5 processor to time-align the front of house speakers to the onstage EMS-101X speakers. Also, by adding small in-fill speakers downstage, we managed to get even coverage to the first three rows. We initially looked at getting a line array for our centre cluster, but a single EM Acoustics R10 at the centre of the proscenium achieved the coverage we needed. Not only did this sound incredible but also reduced the number of units hanging down from the grid, potentially causing shadow issues on stage.”

Summing up the project they say, “At Trinity Laban, our theatre is used for a multitude of different productions, from contemporary dance and musical theatre, to film festivals and corporate events. We needed a versatile, future-proof sound system that could be configured in different combinations with speed and relative ease. We feel that Autograph not only met but exceeded these criteria. We’re delighted with the results.”