Tottenham Hotspur Football Club, an English Premier League mainstay that dates back to the 19th century, is building a $1 billion stadium that’s set to open in 2018.

Although some of the details of the team’s new venue are unknown, a video that includes conceptual looks features large video screens in each of the four corners.

There are 1,500 people working on the 61,000-seat stadium being built in north London, the largest sporting venue of its kind in London. It will include what is believed to be the longest general admission bar in a U.K. stadium as well as heated seats, a micro-brewery and an in-house bakery, along with USB ports in some of the stadium’s premium seats.

Chairman Daniel Levy said in a BBC report that Tottenham Hotspur’s new stadium would “redefine sports and entertainment experiences.” It will have a retractable grass field and an artificial surface underneath it allowing the ground to host soccer matches, NFL games, concerts and other events.

Other features in the new Tottenham Hotspur stadium include: a glass-walled players’ tunnel, allowing people a view of what is happening behind the scenes before a game; a 285-foot long general admission bar; a new beer delivery system that will enable staff to deliver 10,000 pints per minute; and premium heated seats with USB ports.

Team officials expect the new stadium to be “a hive of activity 365 days a year,” with immersive museum and stadium tours, high-tech retail experiences, modern conference and banquet facilities, cafes and a hotel.

Planners say it will feature “connectivity across the whole venue and flexibility to cater for future demands and developments.”

“We know that the ‘game-day’ experience for many begins long before the match starts and we also want to be able to enhance that experience,” according to an update on the stadium’s website, which also includes live webcams in several locations in and around the structure.

The Premier League stadium’s design will feature what officials call “a wall of sound,” with 17,000-seats in the southern end of the building for rowdy home fans, more than any other stadium in the Premier League.

The unique seating bowl places fans “closer to the pitch than at any other comparable size stadium in the UK,” according to promotional materials.

The Spurs’ future home will feature a five-story high glass atrium at the south end “to provide a new focus for home supporters before and after the match, including a new open food court bathed in natural light,” according to stadium officials.

This article first appeared on Commercial Integrator and was written by Craig MacCormack. 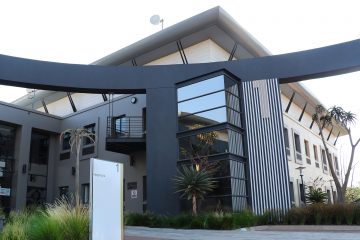