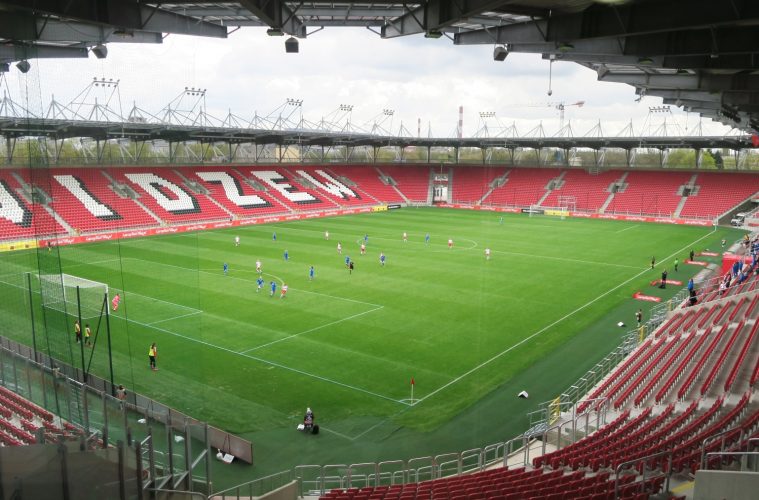 Designed by architect Jacek Ferdzyn, Stadion Miejski is a new construction with an all-seater capacity of 18,018. The design meets the requirements of UEFA Category 3 classification, with the option of adapting to higher categories if required.

The contract for design and installation of the stadium’s sound systems was awarded to Tommex Żebrowscy Sp. J. The first stage of the system’s design was a detailed EASE acoustic simulation for loudspeaker selection and placement.

The system is operated from the commentator room, where a Behringer X32 digital console with DANTE card controls all sound signals. Adjacent to the console is a PC with IRIS-Net software, customised for the venue. This allows for continuous monitoring of all equipment, and adjustment of parameters for particular zones of the system. The commentator room equipment also includes CD/MP3 players, wireless microphone receivers, a digital feedback eliminator and active monitor loudspeakers.

The audio feed from the commentator’s room is sent to two amplifier rooms, located in opposite stands. Each has three Dynacord DSA 8410 four-channel class D power amplifiers, equipped with IRIS-Net RCM 810 control modules, and one Dynacord P64 modular matrix. The P64 allows for remote control of systems devices, signal processing and connection of the entire system to the fibre network. Communication between the commentator room and the two amp rooms is via the DANTE protocol.

Marcin Zimny, commercial director of Tommex, comments: “The combination of equipment in Stadion Miejski has been well proved for quality and reliability in the many stadia we have completed across Poland. The latest R.5-96MAX has not only maintained R SERIES legendary all-weather reliability, but also raised the audio quality to an outstanding level.”