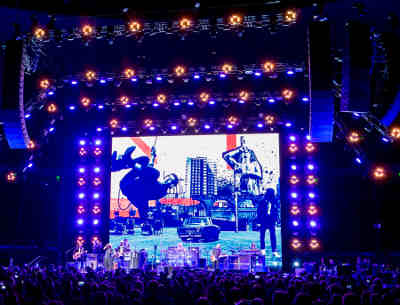 Robe Lighting Used By The Who

Robe lighting rigs have regularly been used on sets for The Who, with the company being a firm favourite with lighting designer Tom Kenny, who has worked with the band since 1989.

The Who’s current tour is celebrating 50 years at the sharp end of rock ‘n’ roll with Tom choosing to use 60 Robe LEDWash 1200s to celebrate the occasion.

A challenge for designing lighting for The Who is that no smoke or haze can be used, which immediately rules out some types of lights – meaning lighting designers like Tom have a very small number of lights to choose from.

In The Who’s most recent tour, a large video system features an upstage LED screen, so any lights had to be potent enough to punch through the ambient lighting levels.

Tom also decided to incorporate LED pixel panels in his design, which amplified the need for a very strong LED wash light.

“I can spec LEDWashes worldwide and get them almost anywhere, and they are extremely robust in all ways,” comments Tom.

“I also needed something that was very lightweight, and you can’t beat the LEDWash 1200s.”

The LEDWashes are positioned all over the trusses, which includes four overhead, four wing trusses at the sides and four vertical towers upstage, which are the primary lights of the show.

The US leg of The Who’s tour is set to continue through to April, with lighting and video kit all supplied by PRG.

This Summer the band is also set to play a selection of festivals this side of the pond, as well as perform a headlining gig in London’s Hyde Park.