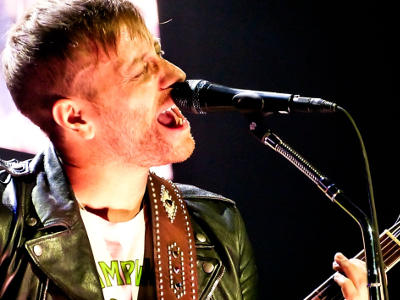 The Black Keys Tour The World With Sennheiser

The Black Keys are currently making use of a plethora of Sennheiser products for their Turn Blue worldwide tour, specified by long-time FOH engineer, Jason M Tarulli, and fully endorsed by monitor engineer Rob Elliot.

Jason has been with the band during their rapid rise to success, which involved learning how to transition from small and medium-sized clubs to sold-out 10,000-seater arenas.

“It’s great to be able to choose what we want after so many years of having to make do with anything and everything,” he says. “As far as Sennheiser is concerned, this is the first tour where we’ve had Sennheiser gear throughout, and so far it’s been great.”

The Black Keys’ production manager Anthony Pitcher is a long time Sennheiser user and was instrumental in cementing the relationship with Jason and Rob.

“I’ve used the Sennheiser line exclusively for years,” he explains. “It wasn’t a tough sell with my audio team – they’re brilliant engineers who already had a thorough knowledge of the product line. It was just up to me to bring it to the table for this band.”

Neumann microphones were used for making the original records, the idea being to carry some of them over for the live drum sound in conjunction with Sennheiser equipment.

The FOH engineer’s final choice regarding the drum kit was an e 904 for the tom-toms.

“The biggest problem I had for a while was with the tom mics,” he recalls. “I love mics like the 421 for toms, but mics that size can be difficult to focus and the stands can be clumsy and take up too much real estate on the drum riser. Most drummers can’t help but hit them. The 904 solved all my problems: it’s compact, clips easily onto the drum, won’t come loose or fall off – even after the occasional wild hit from a drumstick – and sounds great.”

Meanwhile, e 945s were specified for both the tambourine and main vocals.

“The 945 is a good all-round mic with excellent rejection and proximity effects,” he remarks. “The tambourine comes through really well, even in the midst of a loud stage, and it does the same job for the vocals, resulting in nice clear vocals and a crisp-sounding tambourine.”

“It’s great to have The Black Keys on board,” concludes Sennheiser Canada’s Chris Isaac.