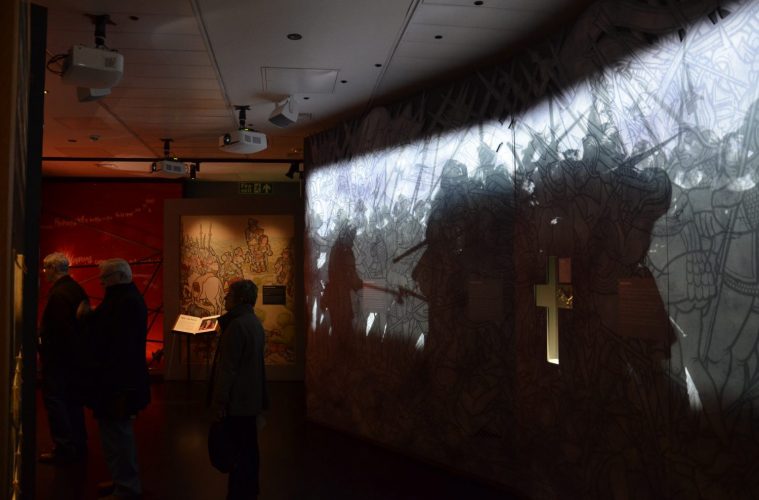 Sysco Productions is an AV specialist responsible for the technology behind some really eye and ear catching visitor experiences around. Founded in 1998 by Hugo Roche (MD) and Mark Burgin (chairman), supported by Graeme Bunyan (director of technology), Sysco cleints include Buckingham Palace, Royal Ascot Racecourse and Twickenham Stadium.

Working on projects for global clients in the museum and heritage, exhibition and sports and leisure industries, Sysco Productions offers services from design and specification through engineering and build to technical support.

Lots of the team have backgrounds in the performing arts, a valuable asset which gives the company an appreciation of what is required to create an emotive visitor experience.

Major recent projects include the UAE Pavilion at Milan Expo 2015, which blends new digital technologies with traditional theatrical illusions such as Pepper’s Ghost to create a journey illustrating the UAE’s interpretation of the Expo theme Feeding the Planet; Energy for Life and work on the UK Pavilion and 2020 exhibition for the next World Expo which will take place in Dubai.

Other recent works include the brand new galleries at the Imperial War Museum, London, winner of AV Awards’ 2015 Entertainment Project of the Year, which brings to life the thousands of objects that the museum holds in its collections, telling stories about World War I. In addition other projects include recent works at the V&A (Alexander McQueen: Savage Beauty / David Bowie Is) and the Science Museum (Cosmonauts).

The History of AV

In 2012 the University of Leicester Archaeological Service, supported by the Richard III Society and Leicester City Council, excavated a council car park on the site of the friary where it was believed the king was buried after his death on Bosworth Battlefield in 1485. Against all odds, the university uncovered his remains and announced their sensational identification at a live TV press conference.

Using a range of media, a new visitor centre, housed in an old school by the car park, needed to bring to life this incredible, almost unbelievable, detective story of Richard’s life, death and discovery.

Iain Gordon, Richard III Visitor centre director, says: “We needed to create an exciting visitor experience that represented King Richard’s story with the utmost historical accuracy, whilst still retaining the element of drama that had captivated the public.”

Jack Strong, sales and marketing at Sysco explains: “The original brief did not change hugely throughout the duration of the project, but the overarching aim for us was to create an exciting visitor experience that would bring to life the incredible, almost unbelievable, detective story of the last Plantaganet King’s life, death and discovery.

“Whilst minor design changes did occur and some value engineering made, the overall AV design remained consistent with the design teams ideas, assisted by cutting edge networked technology that enables remote monitoring, informed maintenance, and the easy updating of content.”

At the start of the journey, the visitor is plunged into a large scale AV set in an arched great hall, where characters from Richard’s early life introduce the story through a series of theatrical ‘acts’. The ‘royal throne’ dominates the room and a projected manuscript scroll unrolls on the floor, providing a time-line of events. Four EH505 ProScene projectors are warped, blended and stacked to create the historical re-enactments between each of the arches.

The death knell for Edward IV leads visitors through a dark paneled hallway through to a medieval world with illustrations inspired by medieval art, ‘gold leaf’ panel and stained glass. A sword ‘swingometer’ sways between Richard and Henry Tudor.

Jack adds: “Visitors are then immersed into the heart of the historical battle with two films projected at 4K resolution onto six-metre wide etched metal fretwork screens in the gallery space. The brutality of the battle, the sheer force of the armies and the crushing atmosphere of battle can be felt in the space.

“The projections make the action literally ‘jump’ from the first screen to the second, with horses’ hooves flying over the audience to The Last Charge, which depicts Richard’s final moments.”

The team also created a Victorian theatre style touchscreen game encouraging visitors to decide upon the fate of the princes in the tower, manual interactive shields which reveal facts about the battle and a 3D printed model of the Blue Boar Inn from which Richard rode to battle.

An iPad interface controls the show

Jack explains: “In contrast to this, the Visitor Centre’s first floor is bright and ‘modern’.  It explores the myths fuelled by Shakespeare, the Ricardian advocacy of ‘rehabilitation’, the archaeological dig and the science behind the identification.

“On returning to the ground floor, visitors are able to see Richard’s original grave. The grave site is a serene space of stone and gold. Under a glass floor, the grave and the original tiled floor are illuminated and a gobo light silhouettes the skeleton’s position.

“We used thirteen EH505 projectors throughout the exhibition. This 5,000-lumen projector was chosen because of its flexibility both in terms of projection capabilities and installation. With WUXGA resolution and powerful image blending tools, the EH505 delivers spectacular image quality and outstanding brightness.”

The company is also a fan of the dust-sealed, filter free design which prevents dust and dirt from affecting the system cutting down on maintenance time and call outs. The projector also has multiple lens options, with zoom and focus adjustment to get the exact image size needed, while the wide lens shift range and off axis short throw lens option gets the image exactly where it is wanted.

In terms of particular challenges on this project, Jack says: “All AV equipment including the projections, lighting and sound needed to be perfectly synchronised, easily controlled via an iPad and 100% reliable. The projectors to be used throughout the exhibition areas needed to be high resolution, bright and discrete, as the ceilings, particularly on the ground floor, are low.”

The Throne Room is one of the many highlights

Now it’s all up and running, Jack says: “Our favourite part is the archway projection in the Young Warrior exhibit, where characters from Richard’s early life introduce the story through a series of theatrical ‘acts’. Four Optoma projectors are warped, blended and stacked to create the historical re-enactments between each of the arches. The client loves the combination of the ‘Bosworth Field’ and ‘Last Charge’ exhibits which throws the audience into the heart of the historical battle with two films projected at 4K resolution.”

Other companies working on the project included, Imagemakers appointed as creative directors for the Visitor Centre with the audio-visual and interactive media content produced by Centre Screen.