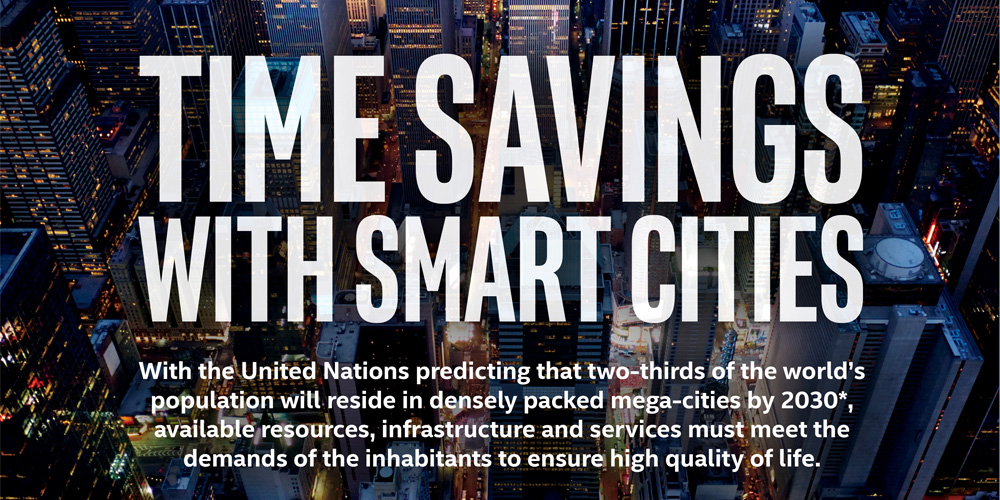 Smart Cities Technologies Give Back 125 Hours to Citizens Every Year

The record for the world’s worst traffic jam belongs to Beijing’s gridlock. For 12 days in August 2010, cars could not escape 62 miles of freeway. This example, alongside the U.N.’s prediction that by 2030 two-thirds of the world’s population will reside in densely packed megacities, reinforces a real urgency to alleviate the pressures and impact of overcrowding.

The concept of “smart cities,” which employs Internet of Things (IoT) technologies such as connected sensors, meters and lights to collect and analyse data to improve public infrastructure and services, holds the promise to dramatically change the way citizens live, work and get around. But is there a way to tangibly measure these benefits?

Yes, there is. An Intel-sponsored study by Juniper Research estimates that smart cities have the potential to “give back” a remarkable 125 hours to every resident every year. Additionally, the study ranks the top 20 smart cities worldwide across four key areas: mobility, health care, public safety and productivity, and reveals how these cities deliver positive outcomes for increased time savings and productivity, increases in health and overall quality of life, and a safer environment.

“Analysts tend to focus on the technical underpinnings of building a data-centric world,” says Windsor Holden, head of forecasting and consultancy at Juniper Research. “We can’t overlook the importance of the real human benefits that smart cities have. Connected communities, municipal services and processes have a powerful impact on a citizen’s quality of life.”

“Cities are engines of economic activity, and we as an industry need to make them more resilient and responsive,” says Sameer Sharma, global general manager of smart cities IoT solutions at Intel. “Partnerships between city planners, government officials, private companies, OEMs, software developers and startups are creating smart city ecosystems that will empower citizens while reducing our carbon footprint.”

Smart Cities Are a Reality Today

Many of the IoT technologies identified in the study – including mobility, health and public safety solutions – are already being deployed around the world.

Mobility: The average peak-time vehicle speed in cities is a dismal 4 mph. This gridlock causes drivers to lose up to 70 hours per year. The study determined an integrated IoT-enabled infrastructure of intelligent traffic systems, safer roads, directed parking, frictionless toll and parking payments can give back up to 60 hours a year to drivers otherwise stuck in their cars.

Health: The study found that smart cities with connected digital health services can play a significant role in creating efficiencies – saving citizens almost 10 hours a year – and even potential lifesaving benefits for both patients and caregivers. Examples such as wearable apps monitor blood pressure, pain tolerance and temperature to help people manage chronic conditions without hospitalisation. “Telemedicine” enables contagious flu sufferers to avoid doctor’s offices with an examination via high-speed video link from the comfort of their home.

Public Safety: Improvements in public safety can deliver substantial time benefits for smart city citizens – nearly 35 hours per year, according to the study. For instance, in Portland, Oregon, (No. 12 in the Juniper Smart Cities Index) and San Diego (No. 14), Intel joined GE and AT&T to deploy the Digital Infrastructure with Current, powered by GE’s CityIQ. This enables the cityscape to generate valuable data. Street lights transform into connected digital infrastructure beacons, monitoring the pulse of city life, which enable a range of local departments to be safer, cleaner and more efficient.

Smart cities may be still in the early stages, but based on the activities the study highlights, which are being rapidly implemented worldwide, there’s every reason to believe these examples are just the beginning of what’s possible.