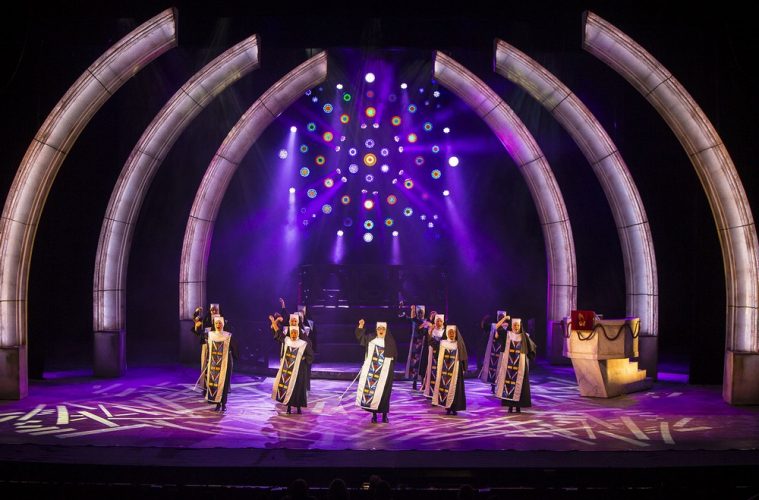 Sister Act has come a long way since the 1992 film starring Whoopi Goldberg, with it now a globally renowned musical that has made its way all the way to downtown Johannesburg.

At the Joburg Theatre, Sister Act is entertaining guests of all ages; but is also the location for the first unveiling of the Robe LED moving lights.

The lighting designers for the show used 89 Robe LED moving lights in total, to create a ‘rose window’.

Production designer Declan Randall wanted to wow the audience by uniting all the visual elements at his disposal – lighting, video and set.

Declan knows the venue well, having lit Starlight Express a few years prior, with the same production team returning to Sister Act.

He began working on ideas seven months before the show opened, back in December 2014.

One of the first elements Declan concocted for the show was a rose window of light.

According to Declan: “All roads led to this!”

The structure comes in at the end of Act 1 and for the top and end of Act 2.

To get the structure to work, Declan needed a little bit of time to work out the geometry.

It was made out of a series of concentric aluminium rings designed in sections to make rigging practical and when it came to choosing lighting fixtures they had to be lightweight as well as being bright and versatile enough to help create both the sense of a stained glass window and the idea of strong beams of ‘sunlight’ streaming through.

The LEDWash 800s were pulled from the theatre’s own in-house rig, the LEDBeam 100s were supplied by MJ Event Gear (facilitated by DWR Distribution) and theatre lighting specialists Gearhouse Splitbeam supplied everything else.

All the fixtures were run in wide mode giving individual ring control for extra dynamics and the whole piece consumed 7 DMX data universes for control.

Once Declan had established the concept in his head, other scenic and architectural elements of the set, like the arches – four large sets of flying portals – to frame the rose window, started to emerge.

Declan also utilised the theatre’s 18 x Robe MMX Spots in his design and its 18 x ColorWash 700s in his overhead rig, together with a selection of 1K and 2K profiles, fresnels, a load of PARs, 96Kw of cyc lighting, fairy lights, some additional moving lights, 7 x Patten 23s for the retro nightclub rig, plus a host of practicals.

The MMX Spots produced most of the overhead gobo work and specials and are among his favourite fixtures.

“I use Robe products when I can. The output and the colour are good and they are really reliable,” Declan states, adding that he likes the zoom and the gobo selection of the MMX Spot.

In terms of an overall look for Sister Act, Declan wanted it to feel cinematic.

The show is based on the hit movie starring Whoopi Goldberg and Maggie Smith and although, naturally, lit in a completely different style, Declan wanted to evoke the same sense of ‘suspended disbelief’ as good film lighting would also do.

The show featured both front and rear projection and much of the scenic detail was created with content stored and replayed via a Catalyst media server.

The show was programmed and run on a grandMA2 full size, which also triggered the Catalyst.

Declan worked alongside assistant designer Joe Lott, one of his second year Creative Lighting Control students from Rose Bruford College in Kent, where he is also a part-time tutor.

They spent a month on site during the tech period and before then heavily WYSIWYG’d the rose window and were also able to complete a good amount of previsualisation.

This helped enormously on site where they were pushed for time and under pressure to produce such intricate results.