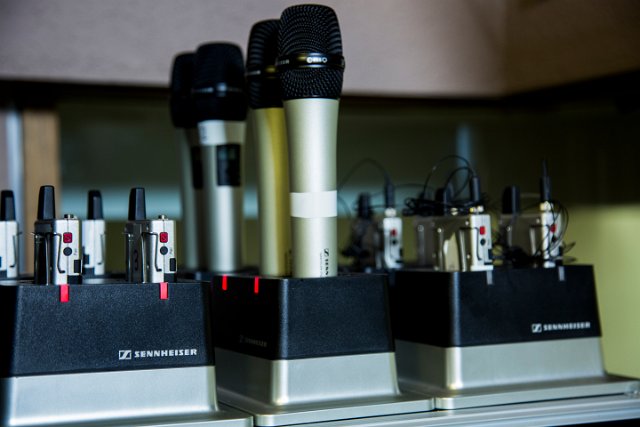 The Royal College of Physicians, located in Regent’s Park London, is the first professional body globally to deploy Sennheiser’s new SpeechLine Digital Wireless microphone system, having purchased 34 channels to replace its existing radio microphones system and to increase the number of channels available.

The RCP meetings and events department operates the conference and events arm of the Royal College of Physicians. The venue is an award winning conference and events centre in the heart of London. The unique Grade 1 listed modernist building, designed by Sir Denys Lasdun, boasts a capacity of 10-400. This makes it ideal for hosting a wide spectrum of events, both medical and non-medical, as well as hosting functions ranging from large international conferences to private dinners and garden parties in its unique medicinal garden, which contains over 2,000 medicinal plants from around the world.

Launched at ISE 2015, SpeechLine Digital Wireless drew on Sennheiser’s research and extensive consultation with users, technicians and integrators, to create the first solution to meet the demand for a wireless microphone purely dedicated to speech. ISE 2016 saw an expanded range of capabilities showcased, which enable simultaneous, multi-room implementations of multiple SpeechLine systems, alongside Dante support for IP network compatibility and effortless management via the new Sennheiser Control Cockpit software.

Sennheiser says that the RCP team chose the Digital Wireless microphone system because they were impressed with its audio quality for voice and because it used DECT technology rather than traditional RF, which has become increasingly difficult to manage as competition for frequencies has intensified in Central London at a time when the government has been selling off more of the spectrum.

The pairing function and some of the additional analytics are also seen as being very helpful to how the microphones are managed in a very dynamic meeting environment, where a lot of the systems will be used in different configurations in various spaces during a single working day. Previously, having to calculate which frequency groups would work best, with the least inter-modulation, was time consuming and difficult to schedule.

“When we were looking to replace our existing radio microphone systems, our criteria were: excellent audio quality and intelligibility of the spoken word; as consistent performance as possible regardless of location within our meeting spaces; as little interference as possible; and a simplicity of set-up and use that allowed for intensive use across a complex schedule of events,” says Ben Pain, technical and AV manager, RCP.

“The SpeechLine Digital Wireless microphone system has delivered exceptional results in all four of our criteria. The whole AV team are really enjoying using them and the comments from our clients have been completely positive.”