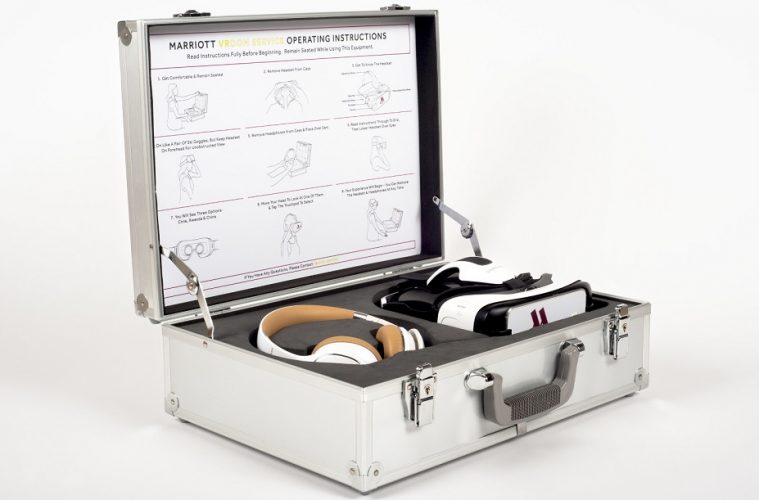 Samsung Electronics and Marriott Hotels have announced a partnership which will see the Gear VR made available at several Marriott locations around the world.

Dubbed ‘VRoom Service’, Marriott Hotels will begin loaning out Gear VR headsets to guests during their stay at one of the company’s hotels.

Currently, the program is only being tested at Marriott’s London Park Lane and New York Time Square properties, but it could one day roll-out to more locations around the world.

Guests will be able to request the VR headsets through the dedicated VRoom number on their in-room telephone, or use Marriott’s mobile request App.

The headsets will be hand-delivered by hotel staff, alongside easy-to-use instructions on how to get started.

Once the guest has gotten to grips with the Gear VR, they will be able to experience Marriott and Samsung’s ‘VR Postcards’ – although Samsung has since confirmed that these postcards will be available to anyone, whether they’re staying at a Marriott hotel or not.

VR Postcards are designed to transport the guest to a new location, outside of their hotel room.

Guests will experience ‘intimate and immersive’ travel stories in 360 3D via the Gear VR headset.

Each story follows a real traveller on a journey to a unique destination; viewers are immersed in the destination and hear the travellers’ personal stories about why travel is important to them.

The first three VR Postcards were shot in the Andes Mountains in Chile, an ice cream shop in Rwanda and in the bustling streets of Beijing.

“Our guests want to be in inventive spaces that help foster their creativity and thinking. VRoom combines storytelling with technology, two things that are important to next generation travelers.”

While on three VR Postcards will be made available – guests will also have access to the Milk VR suite, which features a range of games and other experiences.

“We’re tremendously excited to be collaborating with an innovative brand like Marriott on creating the future for travellers.”

This is not the first time Marriott has dabbled in modern technologies to make its hotels a more inviting place.

The company already offers customers access to Netflix while they are in their rooms and even introduced the first-ever immersive 4D VR travel experience, dubbed the Marriott Transporter, last year.

Guests at Marriott Hotels are also able to contact staff using the Mobile Request feature inside the Marriott Mobile App.

Samsung Shows Off Transparent And Mirrored OLED Displays At IFA 2015