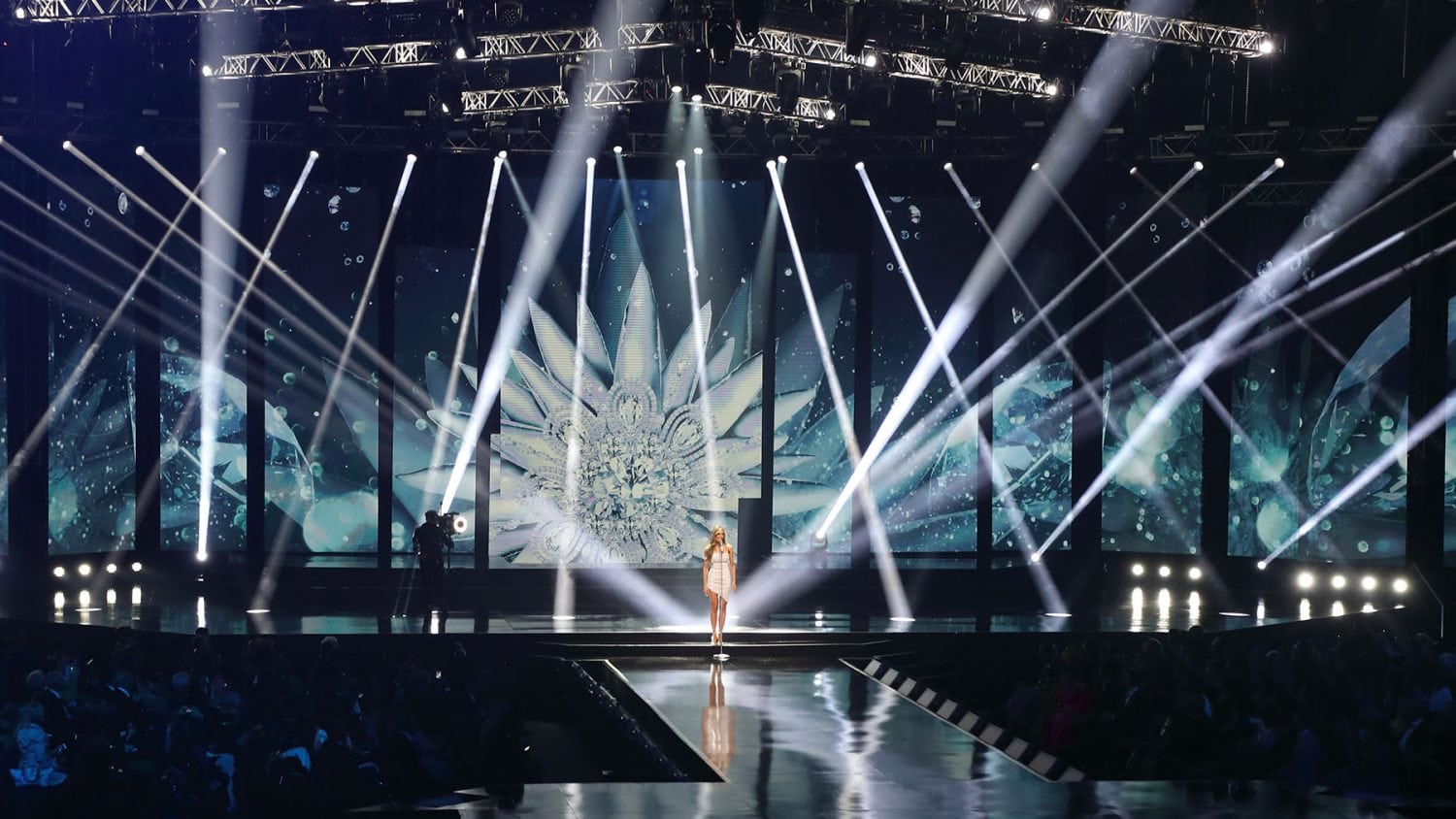 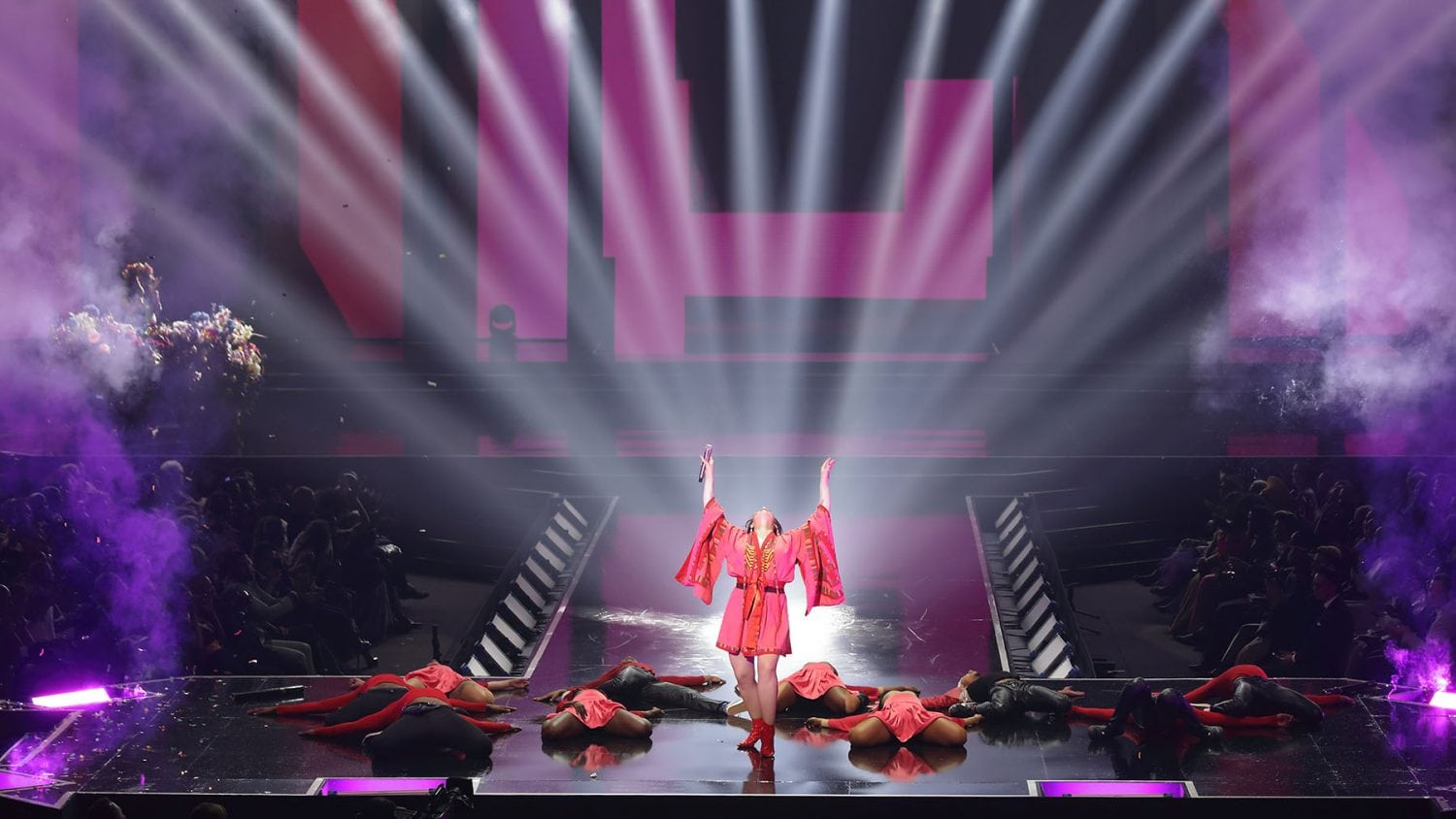 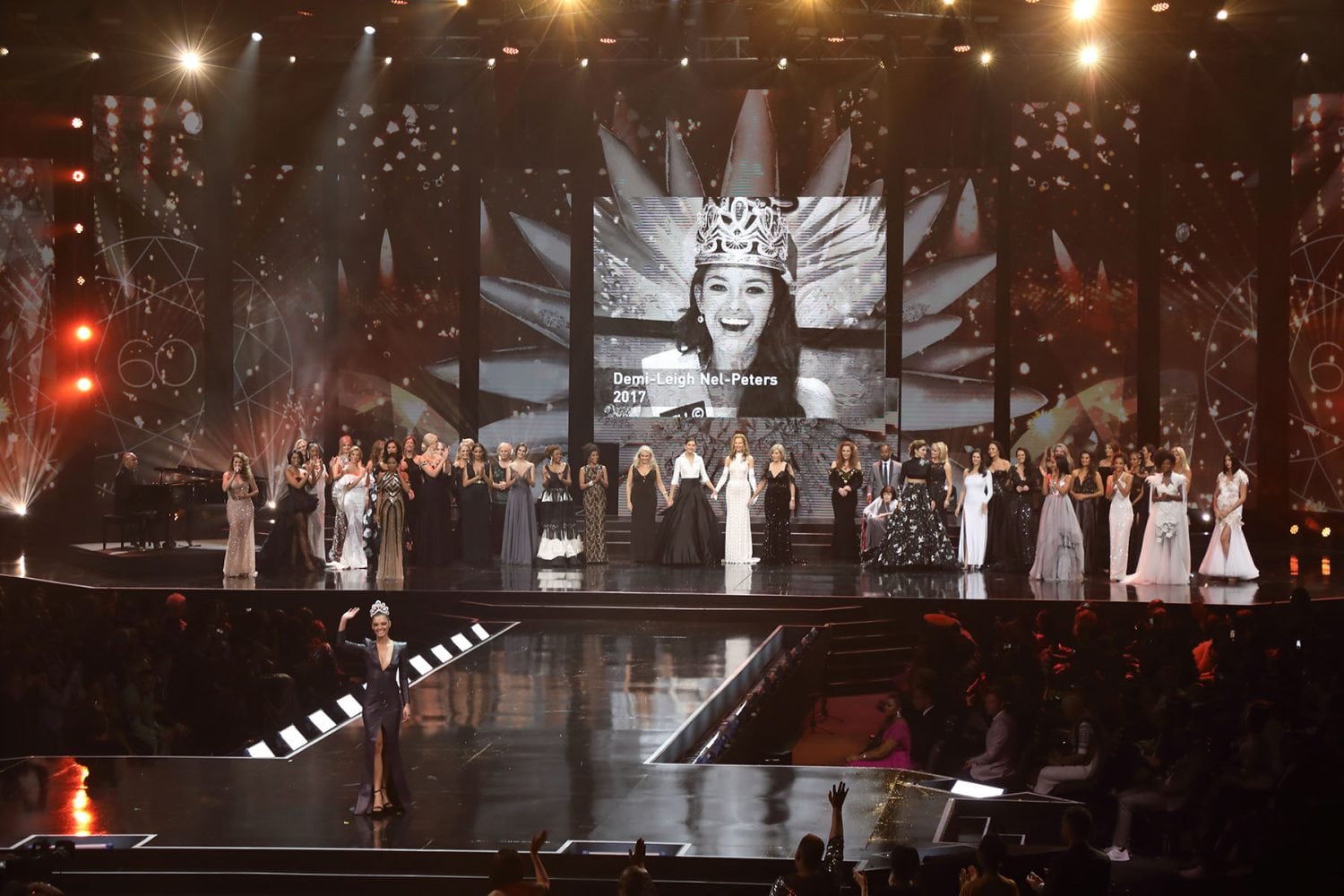 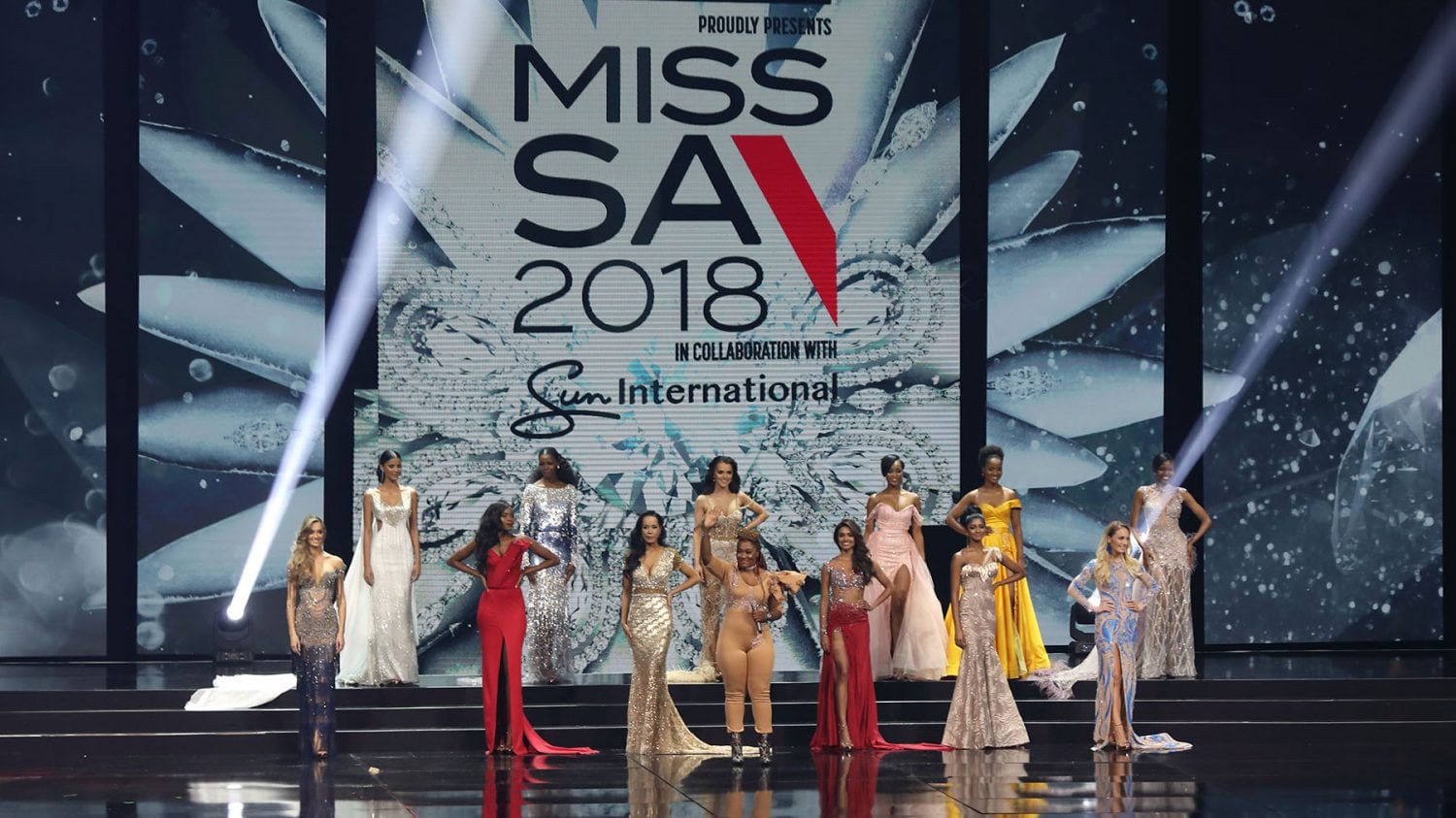 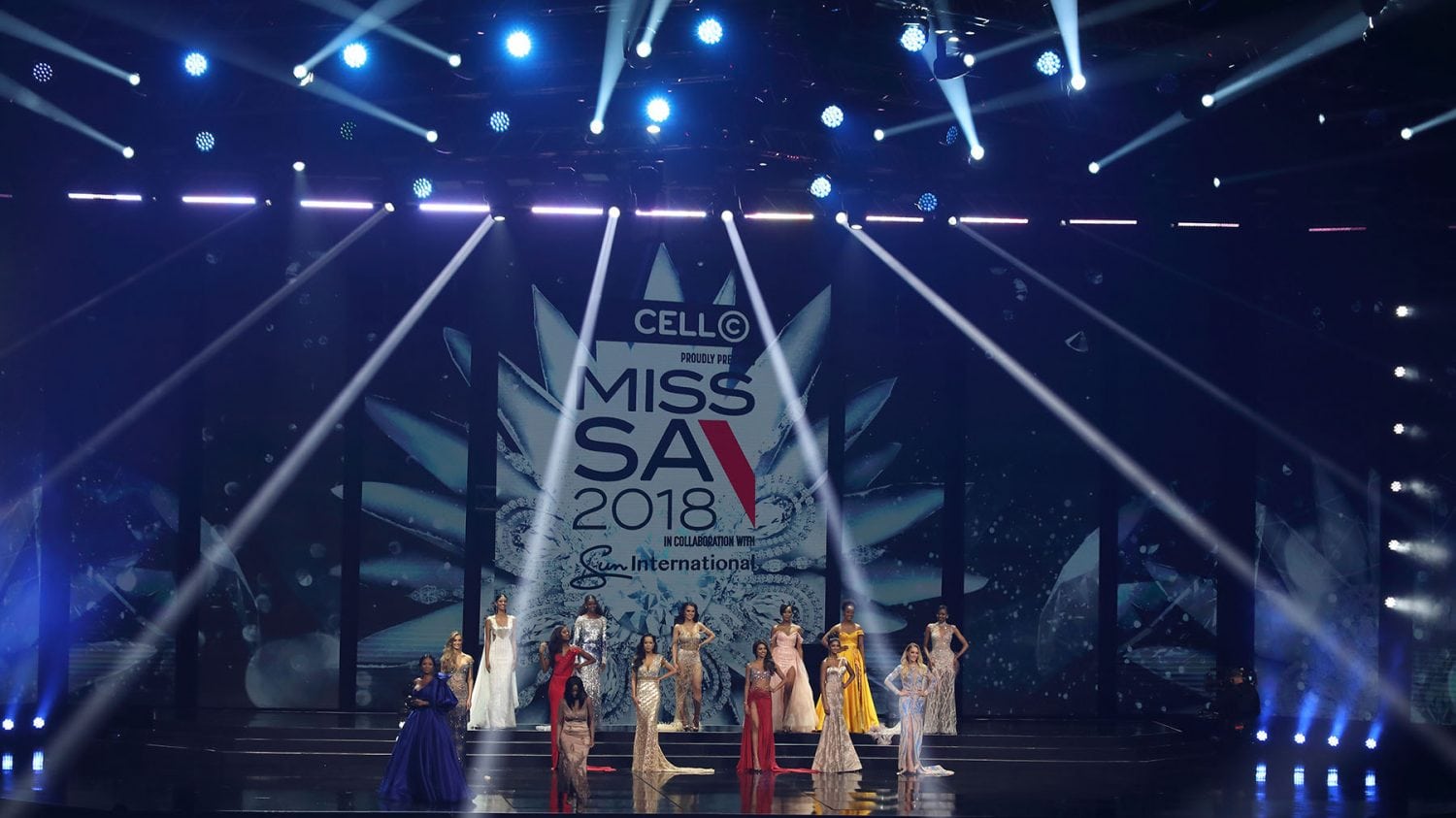 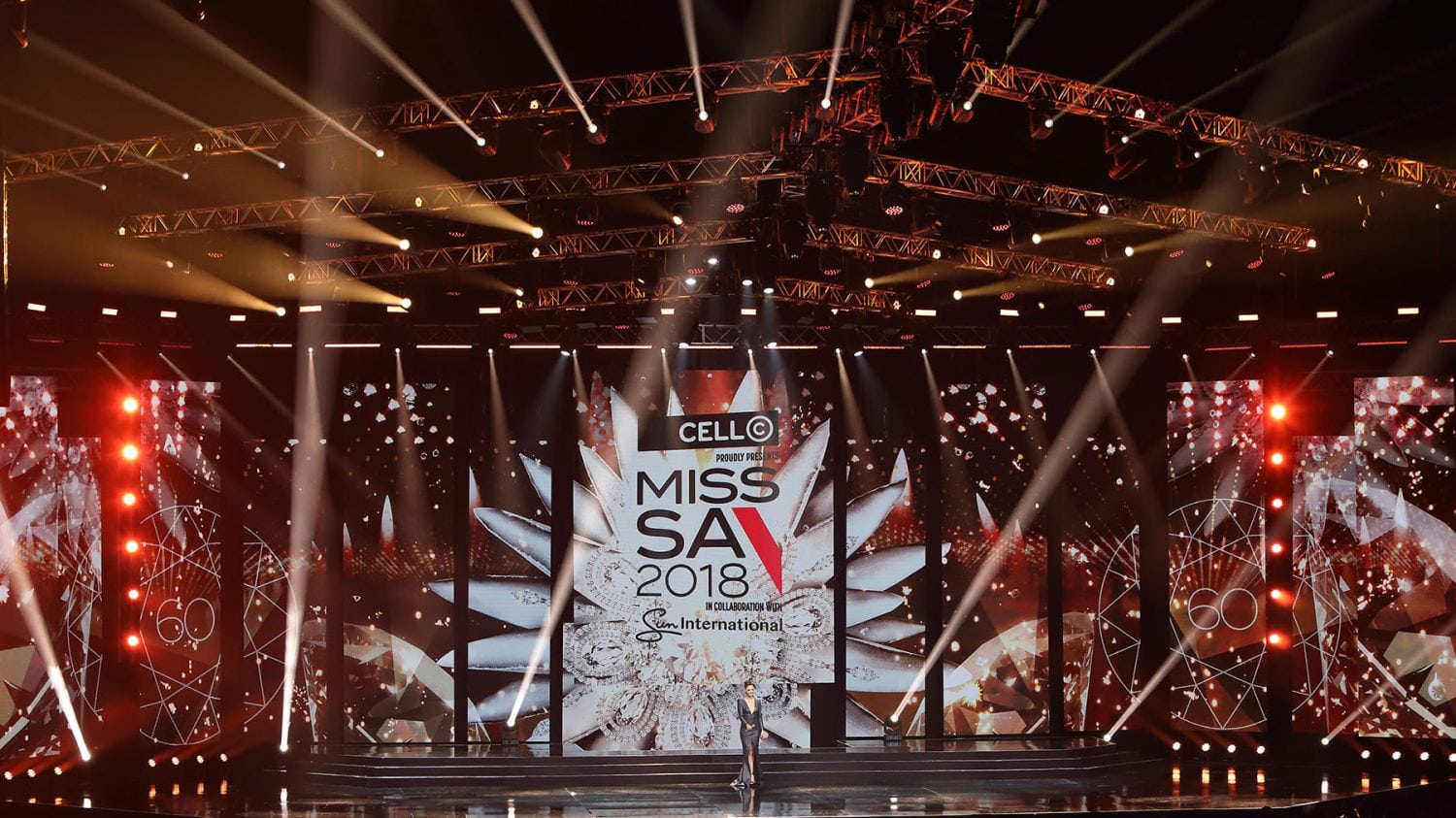 The Miss South Africa beauty pageant was lit by Joshua Cutts for the fourth time in 2018, and in order to ensure that everyone was looking the best, he had to choose the right lighting solution.

For the first time the show was held at the new Sun Arena venue at Times Square in Pretoria, and Josh chose to illuminate the show with a substantial Robe moving light rig of 170 fixtures.

Josh is a leading South African lighting and visual designer and has used Robe products extensively in his work for some time, however this was the first time he had the chance to use MegaPointes on a live show.

The event’s overall lighting and technical vendor was Dream Sets, and its production manager Eben Peltz ensured that everything ran smoothly on site. The production also used elements of the Sun Arena’s house lighting system, which also includes a large Robe rig and is facilitated by MGG.

Josh received an initial brief from the director, Gavin Wratten. They already knew they would have access to all the Sun Arena house lights plus specials and extras as needed from Dream Sets’ stock, all of which was necessary as the Sun Arena is a considerably larger space than the Sun City and Carnival City arenas where Josh had previously lit Miss SA, so he needed more lights!

It was the event’s diamond jubilee year, so Gavin and Josh hit on the idea of basing the show environment on diamond shapes. They went for an extensive LED set but not a massive slab-like TV screen at the back. This allowed for the set to change and morph into different environmental looks as the show progressed.

Instead, the back wall comprised of elegant LED columns, a combination of 2.9 mm and 4.8 mm surfaces, with 16 x 7-metre high sections spread out over a width span of 28 metres. The centre featured a 5-metre-wide LED surface, also 7 metres high.

The main stage was 28 metres wide by 8 deep with a 14 metre ramp extending to the front and a 9 x 6 metre presentation stage at the end of that. Special effects included a kabuki drop at the top of the show to reveal the 12 finalists, and six water features which were integral to the set and also had to be lit.

This year, with the bigger venue and general upping of production values, Josh was able to get the lighting rig he wanted to light all the contestants perfectly across all the stage positions and provide spectacular effects for the three hi-energy live performances that punctuated the different sections of the pageant.

He used 18 x Robe BMFL Blades for all his key lighting across the main and thrust stages with the fixtures rigged on FOH trusses for maximum reach.

Twelve BMFL Spots were used for producing breakup and other effects down the ramp from the stage to the presenter stage at the end of the thrust.

Four V-shaped trusses were installed above the stage for the overhead lighting positions, and 18 x BMFL WashBeams were rigged on these and used for dramatic beam work and texturing the stage and set.

On these same LX trusses were 28 x Spiider LED wash beams which bathed the stage and set in a rich array of colours and the individual LEDs were mapped to give some funky into and back-of-camera looks, and to vary the beam shapes during the aerial scenes.

However, the stars of the show … were the 24 x MegaPointes!

These were positioned for maximum impact on a truss running across the back of the stage just above the LED columns.

“They are totally awesome,” proclaimed Josh with great enthusiasm, “The beams are so powerful they sliced straight through the ambient light coming off the screens, and I could create fantastic in-air effects utilising the gobo wheels and prisms.”

He adds that the clarity and precision of the beams is “exceptional”, observing that the source is so bright, even in a high LED environment, you can just keep putting effects into the light patch …  and it’s still clearly visible.

He loves the prisms, didn’t get time on this occasion to use the beam shaping masks much, but stated categorically, “It’s neat, small, powerful and bright … and has soooo much potential” as a properly multi-functional source.

He used some of Robe’s “ridiculously bright” ColorStrobes on the truss above the screen as audience blinders and comments that they were highly effective, and the colours are “outstanding”, especially the fully saturated red.

On the floor he deployed 8 x Pointes, with another 16 on the downstage truss to create a crown of beam lights around the stage, while the audience was lit with 18 x LEDWash 800s.

Forty-eight LEDBeam 100s were rigged on ladders between the LED columns and also along the bottom of these for camera filler and additional sparkle!

Sixteen Robe ColorWash 2500E ATs were handy for performer specials. Once Robe’s brightest profile moving lights, these are still working well and efficiently after many years on the road in Dream Sets’ rental stock.

The primary moving light rig was supported with more LED strobes, six other profile moving lights and 152 x LED PARs dotted around the rig and the auditorium, plus 12 beam lights for the audience. Seventy-two conventional profiles were used to light the contestants when on the ramp, fashion-show style and 24 x LED battens framed along the tops of the screens.

The house’s two Robert Juliat follow spots were used for the show.

The video playback content – including VT play ins and sponsor logos, graphics and stings – were stored on three Green Hippo servers, and all the lighting was run from two grandMA light consoles with an ultra-light as a technical desk backstage. The show was fully manually operated, as timecode was not a practical option given more organic aspects like variations in contestants walking pace.

Josh and his assistant LD and associate Andre Siebrits had five days of programming and three days of rehearsals. The up-beat musical performances by Sketchy Bongo, GoodLuck and the talented DJ Zinhle who is hotly tipped for great things this year added a great contrast to the show.

The main visual challenge for Josh and Gavin was ensuring that the contestants were always well lit with perfect flesh tones and shadow-less faces for camera and close ups as well as making it an exciting and visually stimulating show – combining the edge of live music lighting with the precision and slickness of that required for broadcast.

“It was brilliant to have a good-sized lighting rig and to be able to use each of the different fixtures fully” says Josh, “it takes a lot of thinking and pre-planning, but we were able to deliver to everyone’s expectations”.