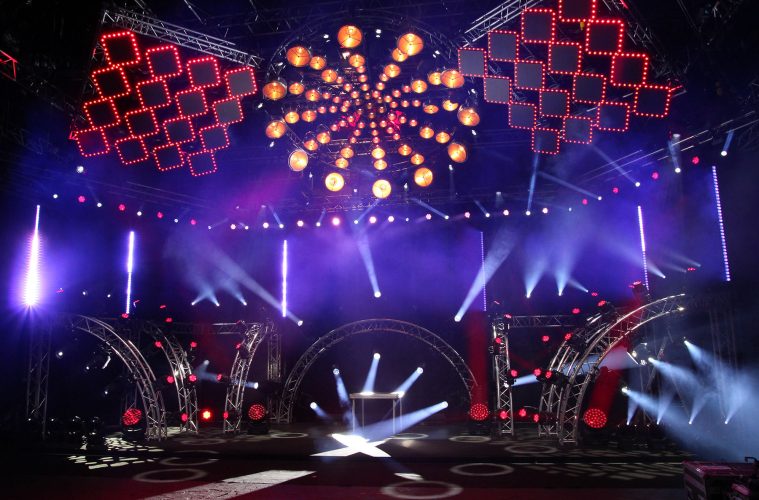 Robe Lighting France delivered its first Robe Awards event, a new design / programming / operating competition which saw 10 finalists – whittled down from over 160 initial entrants – to battle it out in person at Les Studios de la Montjoie in the La Plaine St Denis area near Paris … where they utilised a full Robe lighting rig.

It all started just ahead of the pandemic and lockdowns, when a succession of conversations took place – first ones were in fact over a year ago and between Sebastien Dendele, president of rental company MursDeLeds (MDL), and well-known TV lighting operator Yannick Duc who have been friends and colleagues for over a decade, both sharing a huge passion for lighting!

It was after MursDeLeds had installed Robe fixtures in a Paris club lighting rig that the two men hit on the idea of organising a lighting competition … and started talking with Robe France account handler Jean Philippe Fouilleul. He started to involve his colleagues Bruno Garros, Elie Battah and Vincent Bouquet, who floated the idea of engaging lighting designers and operators – young and aspiring as well as those with already established careers.

The competition kicked off in December and was open to anyone in France familiar with professional lighting consoles and visualisation software and able to programme / operate a lightshow. The initial three stages were virtual and entered via a dedicated Facebook page.

Those gaining the most likes went through to the next round and the process was repeated … until three rounds later, the 10 finalists emerged. They ranged from practising lighting professionals to breakthrough designers, programmers, and operators.

The Finale was staged IRL (in real life) at Les Studios de la Montjoie in a fully COVID-safe and socially distanced event environment which was livestreamed via Robe France’s YouTube channel.

The Finale featured a much larger real lighting system comprising of nearly 300 Robe fixtures including the just-launched high-powered FORTE (with self-referencing, data capturing TE 1.000W White LED TRANSFERABLE ENGINE), and a physical lighting console that had to be programmed and operated live and in real time to a royalty free music track of the competitor’s choice.

Andreas is quick to share credit for this WOW factor with the team from MDL, adding that the idea behind it was “to add a strong and unique Robe identity to the overall design” and doing it with this family of very Robe specific fixtures proved the way-to-go.

The PATT centrepiece was flanked by two flown grids of bespoke moving LED panels framed with RGBW pixel dots designed by MDL. These were also available for the finalists to use.

Six groups of two Robe Tetra2 bars were rigged vertically in front of the main LED screen at the back of the space, with five more Tetra2 moving LED battens in a line upstage along the floor. All the other fixtures were distributed between a series of curved floor-mounted trusses, the studio’s roof grid and the deck.

In addition to the competition rig, a load more Robe fixtures were deployed for general studio lighting like illuminating the judge’s platforms and other areas, with nine T1 Profiles for key lighting, plus more Spiiders, miniPointes and PicklePATTs, ParFect 150s and two RoboSpot remote controlled follow spot systems.

Each finalist had three days to pre-vis their show at home before arriving at the studio with their show-file, and a further 3 hours onsite to upload this and fine-tune, with a choice of grandMA or ChamSys consoles.

The Finale light shows were judged by four leading industry professionals, all present in the studio, although the identity of the show creator remained anonymous throughout the performance and judging!

Two sets of marks were awarded – for the technical and creative elements of each show – by each judge.

The eminent judges were Philippe Cerceau from Paris-based creative design company Clair Obscur, known for his fresh and innovative approach to lighting, a craft finessed over 20 years’ experience working at the cutting edge of fashion and style events and luxury brand activations.

He was joined byFrédéric “Aldo” Fayard,founder and artistic director of Paris-based creative design practice Concept K, who – normally – travels worldwide working on the coolest and most imaginative projects including live shows and installations.

The third judge was Dimitri Vassiliu, one of France’s best-known music, concert touring and show lighting and visual designers and scenographers, famous for his highly original production and concept ideas and perspectives.

“It was truly amazing to get judges of this calibre involved in the project,” comments Robe France CEO Bruno Garros.

The fourth judge was Robe s.r.o.’s global business development manager Bram De Clerck, who states, “It was fantastic to see these efforts made by Bruno, Elie, Vincent, Jean Philippe and the team from Robe France and their partner companies, all of whom gave their time and resources into making this event happen during one of the toughest lockdowns.

“The quality of the contestants was excellent as was the Finale event! The whole competition has proved a great talking point, generated lots of positivity, engagement and conversions and it’s also been a lot of fun presenting these new challenges to the contestants!”

After some extremely tough judging, Jean-Pierre Cary, a lighting designer and assistant operator, was declared the winner.

The runners up were theatre LD Alexandre Marcadé and lighting technician Matthieu Laurent, while fourth place was decided by public vote via Facebook, going to LD Eve Harpe.

Bruno Garros enthuses, “Apart from connecting with so many people across the French lighting community through these Robe Awards, it was a huge honour to work with everyone involved – from the judges to our collaborating technical partners! We all enjoyed the passion, ingenuity, and attention to detail that our entrants put into their shows, and above everything, the finale event was a fantastic chance to show how we can safely stage COVID-safe events.”

He adds that it is intended to run the Robe Awards again, probably at the same time of year, because even in ‘normal’ times with no pandemic and the industry buzzing and everyone working, December through early February is a traditional ‘down’ time.

Those all-important technical partners included MDL who provided lighting, video, 3D tracking, teams setup, catering, and more; Plani-Presse who supplied cameras, sound, mics, and editing services; and JBL Sonorisation who delivered the 12 x Robe SilverScans that were also included in the Finale lighting rig together with some of the power / electrical distribution.

Yannick Duc was the operator for both lighting and media server during the finale. Media server and XR tracking was looked after by Sebastien Barry with streaming support from Quentin Fayette.

The studio video and lighting equipment, logistics and supply for the Finale was overseen by Sebastien Dendele.

The Awards project manager was Kevin Dalibert, with stage managing in the capable hands of Régis Douvry. A console support group was co-ordinated by Quentin Douriez and Kevin Bellay and the teaser and Robe Awards media creation was looked after by Séléné Grandchamp.

Jean-Philippe Fouilleul, Maxime Jeanjean and Vincent Bouquet from Robe France were on hand with global support throughout the competition including during all the rounds and the Finale.

The COVID protocol and testing manager at Les Studios de la Montjoie for the Finale was Annie Rhino.

Bruno emphasises the central role played by Sébastien Dendele in the whole event and the finale. “Without his passion, enthusiasm and perseverance we would never have been able to stage a project of these dimensions, especially during these extraordinary times,” he concludes.